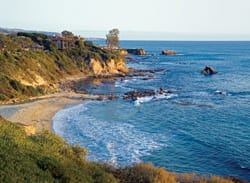 Think of Orange County as a luxurious gift: a package of perfect climate and plentiful culture wrapped in ribbons of prodigious capitalism. Here on California’s Gold Coast, art, shopping, and landscape create an idyllic travel triangle.

That first glimpse of Laguna Beach, a lush curve of “sandscape” bound by steep cliffs crowned with bungalows and modern homes, remains a Southern California icon. The native Shoshone Indians called it their name for lakes. The Spanish referred to it as “canyon of the lakes.” Over the years, the town has developed its own diverse charm, attracting artists and individualists who turned it into a distinct art colony/resort.

In the 19th century, the area was a Spanish land grant whose owner sold 50,000 acres to a group of sheep ranchers. By 1878, sheep rancher James Irvine owned 110,000 acres stretching from the Santa Ana River to the ocean. James Irvine Jr. formed the Irvine Co. in 1894 and changed the ranch operation from sheep to field crops and olive and citrus groves. By the early 20th century, acres of truck gardens lined Pacific Coast Highway, where Japanese-American tenant farmers sold fruits and vegetables from roadside stands alongside Irvine Ranch property. With the onset of World War II, the Japanese were moved to internment camps, and tenant farming came to an end.

Early visitors could reach Laguna solely by an old Indian trail road that snaked through Laguna Canyon, discouraging early land developers. That relative isolation ended in 1927 when Mary Pickford and Douglas Fairbanks cut the ribbon at ceremonies opening a stretch of Pacific Coast Highway and new north-south access. Motorists soon discovered coastal pleasures, while Hollywood unleashed the area’s potential as a movie location, filming Treasure Island in 1918 and Beaches in 1988 at Crystal Cove Beach, with scores of films in between.

Crystal Cove State Park, the Southland’s largest stretch of undeveloped coastline, offers a firsthand feel of the early days. Secluded west of the busy highway, the park wends over three miles of beach roiled by waves, bisected by wooded canyons, and backed by sandstone cliffs between Laguna and Corona del Mar. Rocky outcroppings and dramatic cliffs create a background for the wealth of tide pools and shoreline comprising the Irvine Coast Marine Life Refuge.

A few-dozen beach cottages tuck into the rocks. Little altered since their construction in the 1920s, the wood-frame cottages in the vernacular style so typical of a Southern California beach community in the 1920s and 1930s have earned a listing on the National Register of Historic Places. It is but one of 30 beaches and secluded coves beckoning swimmers, divers, and hikers to a landscape of surf-lashed rocks and lush greenbelts running to the sea.

For bird’s-eye views of Orange County, drive the 261 Toll Road or Route 133 southwest across the Santa Ana Mountains, still unimaginably rugged and pristine, and take in the raw landscape much as it was in the days of the early Spanish explorers.

From Mudflat to Paradise

If Laguna Beach embodies the funkiness of Orange County, Newport Beach is the thriving paradigm of contemporary culture and lifestyle. Laguna evolved slowly, while Newport burst into being in 1905, immediately after Los Angeles’ Red Car Line, an electric railway system, was extended to Newport Beach. It brought such a daily horde of beach lovers that within 10 days residents erected a hotel to accommodate them and began construction of the central Balboa Pavilion.

One year later, Newport Beach officially became a city. Foreseeing its real estate potential, businessman William Collins dug a channel on the north side of the bay, using dredged sand and silt to build up Balboa Island. Eager investors followed, and the city began a series of dredging projects to encourage boat traffic. By the 1920s, Lido and Balboa islands had become charming communities and havens for boaters.

Newport Beach also attracted movie stars such as Errol Flynn and John Wayne (who, due to a bodysurfing injury sustained at the Balboa Pier was forced to abandon his USC football career and pursue acting). Last year, the city honored the 100th anniversary of his birth with a yearlong celebration.

The 2,000-seat concert hall created by architect Cesar Pelli, Carl St. Clair, music director of the Pacific Symphony, its resident orchestra, calls it “the flagship that establishes Orange County as the next driving music center in America.”

Orange County is fast becoming the paradigm for Southern California arts and culture, but it hasn’t missed a beat with the equally well-heeled shopping audience. This merger of art and commerce makes more magic in Costa Mesa. From the iconic Richard Serra sculpture at the Performing Arts Center, you can cross the footbridge over Bristol Street, through the grassy Noguchi sculpture garden, and right into South Coast Plaza. This department store-laden, restaurant-happy delight has grown into the highest-grossing retail center in the United States.

Hilton Waterfront Beach Resort: This four-diamond property in Huntington Beach has a sand volleyball court in addition to its 290 rooms and 24 suites with private balconies with views.

The Island Hotel: Located in Newport Beach, the hotel has 295 rooms with private balconies, many with views of the Pacific Ocean and Balboa, Lido, and Catalina islands.

Marché Moderne: On the top floor of South Coast Plaza, this French bistro has been called the best in Southern California by the Los Angeles Times.

Miraposa at Neiman Marcus: From creative sandwiches to regionally inspired entrées and house-made desserts, savor delectable fare and take in the view of the Pacific Ocean, Catalina Island, Palos Verdes, and the San Gabriel Mountains.

Pageant of the Masters began in 1933 as a sideshow to Festival of the Arts. Now celebrating its 75th birthday, it ranks among the world’s finest tableaux vivants, recreating famous works of art with live models, elaborate costuming, and a full orchestra.

Sherman Library and Gardens: A lavishly planted, two-acre botanical garden bordering the Pacific Coast Highway, it remains a quiet enclave and the setting for a research library of the Pacific Southwest. Visitors with advance reservations can enjoy a peaceful luncheon in the garden.

Crystal Cove State Park: The Southland’s largest stretch of undeveloped coastline offers an expanse of beach roiled by waves, bisected by wooded canyons, and backed by sandstone cliffs. The park wends over three miles of beach between Laguna and Corona del Mar.

Crystal Cove Beach Cottages: These few-dozen 1920s wood-frame cottages have been named to the National Register of Historic Places and are available for rent through California State Parks.

A theater-in-the-round performance at the South Coast Repertory.

A performance at the Renee and Henry Segerstrom Concert Hall, called “the Stradivarius of concert halls” by Pacific Symphony Director Carl St. Clair.