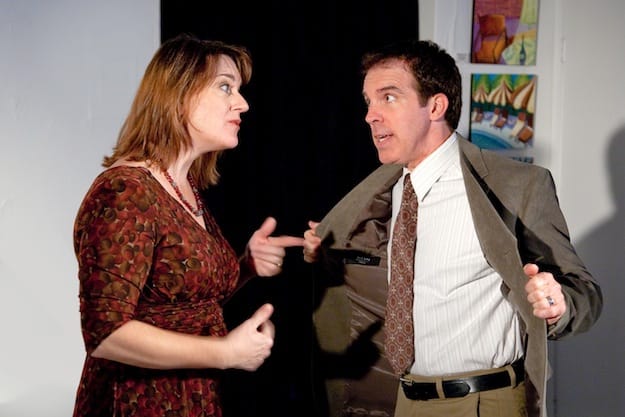 However, by entering the competition at Dezart Performs in Palm Springs, Nelson knew there was an even greater prize in store.

“If you can win at Dezart Performs, then voila! You’ve got your chance,” Nelson said. “I wanted my play staged and produced where it mattered.”

“Our mission,” said Shaw, “was to develop new works for the stage with established and emerging playwrights to bring never before seen plays to the Coachella Valley.”

When the gallery closed its doors, Dezart Performs moved to the Palm Springs Woman’s Club, a venue three times the size of the 40-seat maximum at the gallery. Since then, they have won 12 Desert Theater League’s Desert Star Awards and received 53 award nominations.

Now in its fifth season, Dezart Performs is in the midst of its most popular event – the Annual Play Reading Series. Plays from writers nationwide like Nelson are selected from those submitted for consideration. The chosen few are then read to a live audience, which is invited to vote for its favorite. The play receiving the most votes is produced the following season, fully staged and professionally performed.

To her delight, Nelson’s was the 2011 “Audience Favorite”, leading to full production in 2012.

“Casting was genius, and they were able to create a scene and lighting design that beautifully supported the show,” Nelson said. “They’re well oiled and efficient. They’ve been wonderful and it was a wonderful experience.”

Last year’s reading series produced a three-way tie consisting of hilarious, one act plays – “The Blind Date”, “Mountain Glory” and “Feeding Time at the Human House”. The trio was performed in December under the title “The Mating Game”.

“They’re a marvelous incubator for new and exciting projects,” said David Weiner, winning author of “Feeding Time”. “They provide an environment of creative growth for actors, directors and writers.”

Dezart Performs also co-produced with Burt Peachy the Coachella Valley premiere of Dustin Black’s “8”, which emerged from the court case of Schwarzenegger v. Perry about Proposition 8 banning same gender marriage. The production raised more than $1,800 in donations made to Broadway Impact and the American Foundation for Equal Rights.

Five new plays have been selected for this year from 57 submissions from around the country. They are “Fifteen Men in a Smoke Filled Room”, “An Ignorant Man”, “Invasion of Privacy”, “The Great Tit”, and “Exquisite Potential”. This year 24 actors and directors from the Coachella Valley will participate.

Readings began last weekend and will be performed again this weekend, April 19-20, at Dezart Performs.