Foodie Experts: Where to Dine, What to Order in Greater Palm Springs 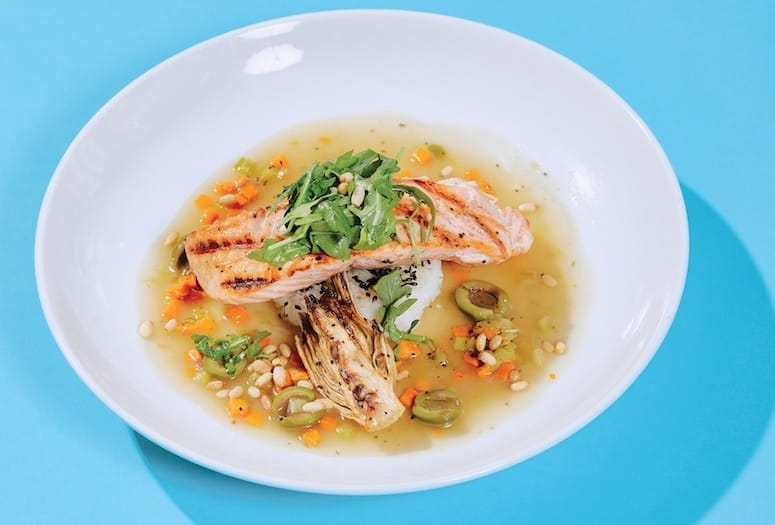 The Steelhead Salmon at Eight4Nine in Palm Springs.
PHOTGRAPHS B Y NATE ABBOTT

It’s your favorite restaurant. The menu is intriguing, and tonight, you will take a chance and order something different, something you have never tried. The waiter knows you and expects you to order the usual. You’re going to surprise him. You will surprise yourself.

Except you won’t. Because once you sit down and open the menu, your eyes will immediately focus on that one thing they do here that’s completely irresistible. Why resist? It makes you immeasurably happy and, for God’s sake, as we all move through this veil of tears called life, why shouldn’t you be happy? So, you order it. The waiter shrugs. He knew it all along.

“Okonomiyaki [a Japanese savory wheat pancake with cabbage and various other ingredients] with sake from Shabu Shabu Zen in Rancho mirage.”

“My craving in Palm Springs is the Loco Moco at The Reef Bar in the Caliente Tropics Resort. Loco Moco is a Hawaiian staple consisting of a burger patty, fried egg, and gravy over white rice, but The Reef puts an Asian spin on it by using a slightly sweeter gravy. Also, I’ve spent two decades drinking in the city, but the Reef is the only place that created and named a cocktail after me. Best of all, the Reef is a few, wobbly steps from my home at the Royal Hawaiian Estates.”
Josh Agle, aka, Shag, is an artist and graphic designer whose work is heavily influenced by midcentury modern design, particularly Tiki pop. He opened his first Shag store in Palm Springs in 2009 and another store in Hollywood in 2015.

“The key to a good life is knowing where to go for great Chinese good. Happy? Let’s get some Chinese! Sad? Let’s get some Chinese. (It’s all in the punctuation). Better still if the place is off the beaten path, like Cie Sichuan in Indio. Cie’s menu deserve deep investigation, because it features pages and pages of authentic Sichuan cuisine. Every time I go, I must get the fried pork dumplings. Filled with tender pork and fried to a perfect, golden brown, I can eat all eight in one sitting without the least bit of guilt. And without any compunction to share.”

Tod Goldberg is the New York Times best-selling author of more than a dozen books, including his latest, The Low Desert: Gangster Stories. 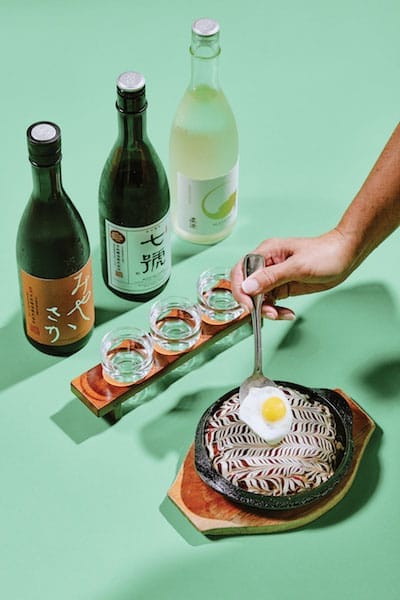 Okonomiyaki, a savory wheat pancake with saké, at Shabu Shabu Zen in Rancho Mirage.
“[Our friend] Ron lives in Vista Las Palmas and knows everything about every restaurant in town. He’s the one, when my wife and I were looking for just the right house (he found it for us, of course), [who] told us that when we were famished and tired of looking at this Wexler or that Lautner, we should go to Copley’s, the old Cary Grant guesthouse-now-restaurant, and ‘ask for Andrew’s sublime Oh My Lobster Pie.’ Ron never called it just ‘lobster pie.’ It was always ‘Oh My Lobster Pie.’ He was right about the dish. Whenever I ate it, a parsimonious forkful at a time, I would find myself silently murmuring, ‘Oh my!’ at the flaky puff pastry, the generous chunks of lobster, the sprinkling of pearl onions, leeks, mushrooms, and sweet peas.

Oh, and the velvety puddle of veloute sauce from which the puff pastry arose. Like steak frites or French onion soup, it was simple, but — as Ron had told me — sublime. Then, like an old friend who has suddenly vanished, it was gone. Off the menu. Ron and I still talk about it. Wistfully. Andrew Copley, bring it back!”
David Lansing has written for National Geographic, Bon Appetit, Sunset, Los Angeles Times, and Palm Springs Life. He splits his time between Newport Beach and Palm Springs.

“I once spent three days at McDonald’s corporate headquarters observing the creation of a new sandwich and learning the science of ‘flavor build’: the layering of ingredients I a precise order to maximize ‘excitement’ in every bite. Those McDonald’s execs should just go to Jake’s and order the soft-shell crab BLT. Crunchy fish, salty bacon, acid tomato, aromatic aioli, sweet brioche…it’s the most exciting sandwich I’ve ever had.”

Stephen Drucker is the former editor-in-chief of House Beautiful and a former contributing writer for Architectural Digest. He was executive vice president and editor in chief at Martha Stewart Living Omnimedia and produced the definitive book about Sunnylands for Vendome Press.

“We have been going to Le Vallauris for 44 years and I always wind up ordering the same thing. Both Suzanne and I love the Dover Sole Croustillant with a reduction of butter, lemon, capers, and white wine with a large plate of crispy French fries followed by a chocolate soufflé.”
Producer Alan Hamel and actress Suzanne Somers, longtime Palm Springs residents, met in 1969 on the Anniversary Game, where she was a prize model and Hamel was the host. They have been married since 1977.

“I love the Suzanne Somers Smoothie with ginger from the Palm Greens Café. I usually split it with a friend.”
Trina Turk founded her eponymous clothing and lifestyle brand with her late husband, Jonathan Skow, in 1995. Comprised of ready-to-wear, swimwear, eyewear, and paper goods, the brand reflects the resurgent popularity of modernism.

“I love food at Tac/Quila — the ceviche and, most surpisingly, the Mexican oysters. They serve them on the half shell with a light sprinkle of fresh, spicy chiles. They go great with their amazing Margaritas.”

Barbara Warner Howard is a longtime board member of the New York Theater Workshop and the daughter of legendary Hollywood mogul and some time Palm Springs resident Jack Warner.

“Love, love Spencer’s whitefish with crispy skin. So moist inside. With great side dishes!”
Nelda Linsk, legendary hostess and living Palm Springs treasure, arrived in in town in the early 1960s, and she and her husband, Joe, bought the Neutra-designed Kaufmann House. Perhaps the most indelible image of Palm Springs is the 1970 photograph by Slim Aarons of Linsk and Helen Dzo Dzo (Kaptur) at the Kaufmann House in Poolside Gossip. 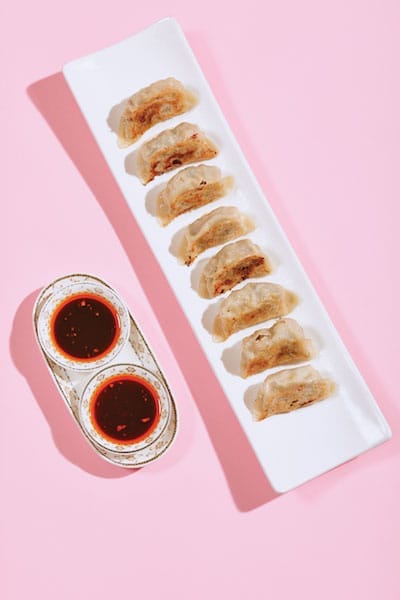 The fried pork dumplings at Cie Sichuan in Indio.

Rob Pruitt is a post-conceptual artist who works in a variety of mediums. For the last 20 years he has been known for his glittery panda paintings. He participated in the inaugural Desert X exhibition in 2017 and lives part time in Palm Springs.

“The pandemic has kept my wife and I separated from our children for over a year. The separation has made us search for and value things that provide comfort. Let’s face it: Food is a thing that provides me comfort. My absolute favorite comfort food is a pancake — well, several pancakes. I like to eat pancakes and I like to make pancakes. In my business we work lots of nights and weekends, and breakfast is a special time for family, because Dad is around. Nothing is more fun for me than making breakfast for my children and every one of them loves my pancakes. I was thrilled to discover that my new favorite pancake in the world can be found not in my own kitchen, but at Keedy’s Fountain and Grill. It is almost impossible to drive by without stopping. I am a pancake afficionado and I don’t know how they make them so light. A good day starts with coffee and pancakes from Keedy’s.”
Jamie Grant is the new president and CEO of the McCallum Theatre in Palm Desert.

“I’m not so fancy as the others. For me, it’s the Homemade Blueberry Pop Tart at Wilma and Frieda’s.”
Gino LaMont, KMIR News anchor, joined NBC’s Coachella Valley affiliate almost 30 years ago and has since been a fixture on local television. 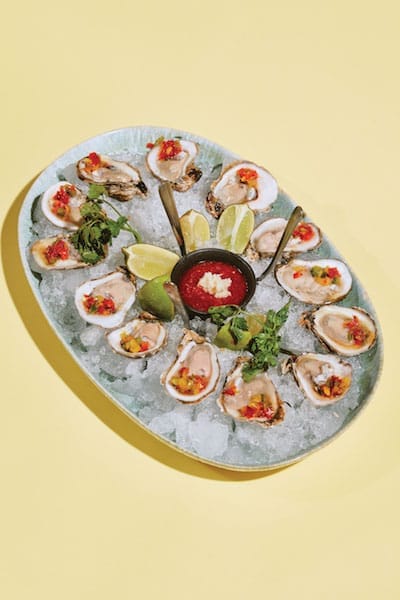 The Mexican Oysters at Tac/Quila in Palm Springs.

“My tastes veer toward the relaxed and congenial. Like a vodka martini and sand dabs at Oceans.”
Peter Bart is a journalist and film producer known for his long tenure (1989 to 2009) as editor in chief of Variety and for co-hosting Shootout with film producer Peter Gruber from 2003 to 2008. He has written a column for Deadline Hollywood since 2015.

“Le Vallauris has been my standby for 30 years, thanks to the Manhattan recipe that fashion designer James Galanos did for his friend Paul Bruggemans. The Manhattan Up is beyond divine. The steamed whitefish done on a bed of spinach in a Beurre Blanc is heaven. If they have §the chocolate volcano, it is mind-blowing.”
Michael Childers is an award-winning photographer and creator of the popular annual charity event One Night Only.

“Mine is Wilma Jean’s fried chicken at Eight4Nine. It’s made with a cereal covering. [It] doesn’t have a fried taste at all, not greasy but flavorful. My wife Diane’s favorite at Eight4Nine is the Steelhead salmon.”

Andrew Neiderman, the Palm Springs-based author of The Devil’s Advocate (adapted into a Keanu Reeves film), has written more than 40 novels under his own name, and about 90 young adult novels attributed to the V.C. Andrews Trust. V.C. Andrews (d.1986) was famous for the YA classic Flowers in the Attic. After her death, Niederman created many new series on the Andrews book.

“Eggplant Parmigiana at Trilussa Ristorante [in Cathedral City].”
Barbara Boxer served as U.S. Senator from California from 1993 to 2017. She has written two novels and a memoir, The Art of Tough. She and her husband have had a residence in Rancho Mirage since 2006.

“Eddie V’s roasted Brussels sprouts. I’m 99 percent certain they do them with Parmesan and lardons. They’re super-indulgent. I have an order while I’m there and order an extra one to go. It is absolutely my favorite thing.”
Kelly Gray, a former model and face of St. John, is a designer and co-owner of the fashion label and boutique Grayse on El Paseo and Newport Beach.

“I can’t pass up the medium rare prime rib, the lobster mac and cheese, and a glass of Liberty School Cabernet at The Steakhouse at the Agua Caliente Casinos [in Palm Springs and Rancho Mirage].”
Karen Devine has been delivering local news as an anchor and investigative reporter for more than 27 years and was recently recognized by National Academy of Television, Arts, and Sciences for her work in broadcast journalism.

“The House Corned Beef and Cabbage at O’Caines Irish Pub in Rancho Mirage is my favorite meal.”
Assemblyman Chad Mayes is a Yucca Valley native and began his career on its city council. Mayes was elected to the California Assembly in 2014 for the 42nd District. In 2019, he left the Republican Party and filed for re-election as an Independent. He now lives in Rancho Mirage.

• READ NEXT: Who Has the Best Burger in Town? Our Best-of-the-Best Voters Weigh In.