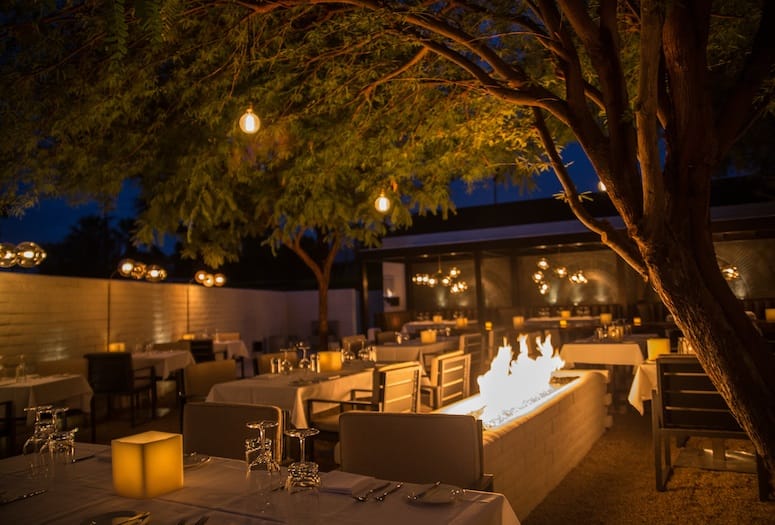 In 1952, television producer and oil baron Jack Wrather Jr. hired architect William F. Cody to design the L’Horizon compound so that he and his wife, Bonita Granville, could use it as a desert getaway for their family and friends like the Ronald Reagans, Richard Nixons, and beauties like Marilyn Monroe.

After years of genteel decline, L.A.-based designer and luxury-hotel devotee Steve Hermann purchased L'Horizon Resort and Spa and infused $5 million over two years. Among the amenities he added to complete the international destination was SO.PA (short for South Palm), an intimate, al fresco restaurant.

While there are a number of inexpensive coffee shops and restaurants within walking distance, “I think because of that former owners didn’t have a restaurant on property,” says Michael Worth, SO.PA general manager. SO.PA is intended to cater to hotel guests and Coachella Valley residents.

What Hermann wanted was a dining space that would be inviting to both valley residents and hotel guests. “There isn’t a restaurant like ours at this end of Palm Springs,” Worth says.

Former badminton courts were replaced with the romantic SO.PA space. Tables shaded with trees, lit by candles and Lindsey Adelman lights that give the SO.PA a soft glow. A central communal table has been placed for single guests or those who wander in without a reservation. And gently burbling water fountains and soft music mask the sounds of East Palm Canyon Drive, less than 50 feet beyond the restaurant’s south wall.

Atmosphere is great, but it’s the food and chef at SO.PA that sets it apart from other eateries in the valley. First, there’s executive chef Giacomo Pettinari, the Coachella Valley’s only Michelin star chef. Born in Loreto, Italy and raised on his family’s farms, Pettinari’s first kitchen lessons came from his mother and grandmother. “Where I come from we have the mountains and the sea,” Pettinari recalls. “In the fall we harvested olives and grapes on my grandfather’s farm to make wine and olive oil, and in winter we made sausage and hams from on our farm.”

At 14, his mother sent him to the Panzini Culinary School, where he spent five years learning his craft. At 19, following school, Pettinari went on to work with chefs such as Fabio Trabocchi in London and El Bulli’s Ferran Adria. He came to the States 11 years ago and has worked at several restaurants in the LA area before being chosen by Hermann to head up SO.PA. The menu Pettinari has created is fresh, seasonal, and as artistic as it is delectable.

Pettinari makes everything from the breads and butter served when you arrive to stocks and sauces for the entrees and the sorbets and gelatos that accompany his desserts in his kitchen. The menu is eclectic and curated, with the whole of the Mediterranean cuisines represented in his dishes. There are a number of sharable appetizers from Turkish Muhamarra red pepper dip; Labneh yogurt dip served with house-made naan; Kumamoto Oysters from Humboldt Bay, Calif., and veal cheeks braised in red wine.

Salads include Black Quinoa with nuts, berries, Kalamata olive oil and IP8 beer vinegar; and Compressed Melon Salad with French feta, an incredibly light red onion relish and micro mint leaves, which should also be on the dessert menu. It’s almost too pretty to eat, and delightfully refreshing on a late summer evening. As a nod to his native Italy, Pettinari has included Squid Ink Potato Pillows, with Maine lobster, crustacean reduction and tomato concasse; and Principato Lucedio Risotto with Porcini Mushrooms, butter, and Parmigiano Reggiano. The mushroom stock is made in-house and the risotto is cooked to order. It is warm, rich and satisfying, whether your diet is carnivore or omnivore. Desserts are satisfyingly sinful, like the Banana Bliss, with a base of banana blondie cake, banana mousse, Madras curry banana ice cream, alomonds and peanuts croccantino. Amazing. The curried ice cream was the perfect accompaniment to the banana flavors.

SO.PA is as much an experience as it a place to dine. And don’t worry about feeling rushed. “We want our guests to come in, relax and linger over their meal,” Worth says. “Enjoy a cocktail and dining in this beautiful space.”