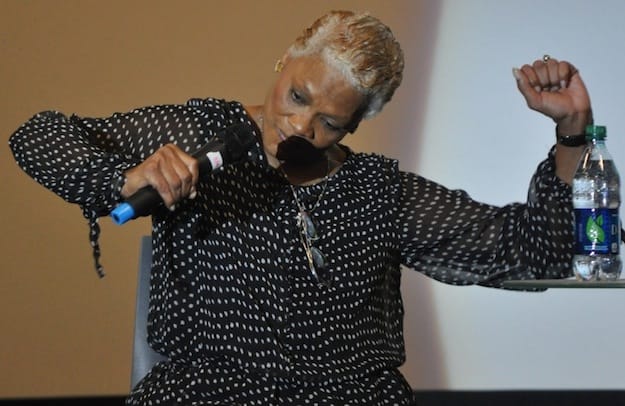 It’s already been over a year since Whitney Houston was found dead in Beverly Hills, but the marvelous voice which wowed millions of fans can be heard in footage from “Voices of Love”, which screened Thursday night to officially open the second annual American Documentary Film Festival in Palm Springs.

The four-day film festival (April 4-8) features 100 documentaries from all over the world split between two venues – Camelot Theatres in Palm Springs and Century Theatres at The River in Rancho Mirage.

Houston’s cousin, Dionne Warwick, attended Thursday night’s screening and got a chance to see the entire documentary for the first time by director Gary Keys.

“I must say, I am exceptionally pleased with what I just saw,” Warwick said to the Camelot Theatre audience in a Q&A after the screening. “When Gary approached me about being a part of this, I thought there was a reason they (her family) would not or should not. Of course I approached Cissy (Houston, Whitney’s mother) first. She felt our life is something that should be told. We have in our family an enormous amount of legacy.”

“Voices of Love” focuses on the Drinkards, which included Warwick’s mother, Lee, Cissy Houston and other members of an incredibly talented family. The gospel group, The Drinkard Sisters, provides the influential roots of both Dionne Warwick and Whitney Houston’s singing careers.

The film has what may be one of the last interviews Whitney Houston gave before her death. Even in that light and the anniversary of her death in February, Warwick found the film to be uplifting.

“It was not at all hard to watch,” Warwick said. “I have incredible memories of Whitney, but also my mother, my sister – all the members of my family who have gone on to be with my heavenly father are watching me. So there is nothing to be remorseful about. There is always joy when it comes to my family.”

As a child, Whitney and her siblings accompanied Warwick on her concert tours during the summer months of the 1970s while Cissy Houston sang backup vocals.

“Whitney loved to sing,” Warwick said. “Gospel with the entire family is and will always be her first love. It’s something we grew up with.”

Warwick, who is in the midst of her 50th anniversary World Tour, recalled her first public singing performance at her grandfather’s church in Newark, NJ, where the family grew up.

“He called me to the pulpit and I wanted to know why he wanted me to come up there,” she recalled. “He bent down and said, ‘Baby girl, I want you to sing that you song you do and lead the Sunday school class in’. So he stood me on some books so I could see over the lectern, and I closed my eyes as tight as I could get them, and I started to sing, ‘Jesus Loves Me’. Because I kept hearing, ‘Yeah, Well, Alright now’, I opened one eye to see what was going on and saw all these smiles in the congregation. Well then, I just went crazy, and I started ripping out, ‘Jesus Loves Me’. That was also my first standing ovation.”

But even given all of the pleasure music and singing has given her, Warwick responded to one question about whether she would enter the music business if she were starting out today.

“Nope,” she said succinctly. “This business is not all it’s cracked up to be. Most people think we jump out of bed with made up hair and $20 million. Ain’t so. Just like you get out of bed with your hair standing up and running to the bathroom to brush your teeth, yeah, that’s what the reality is.

“The road is not as much fun as most people think it can be,” she added. “The most fun is the 90 minutes on the stage giving you the music you come to hear. So, no, I wouldn’t do it if I was starting out today. I would be teaching.”