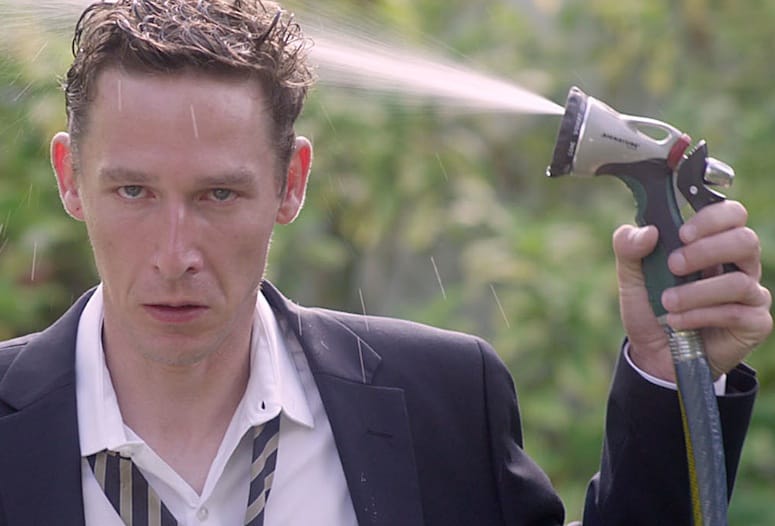 Brian To has his tomato plants to thank.

Otherwise, the making of Dry Dock may never have happened. The 10-minute short film premieres at 11:30 a.m. Sept. 21 with four other shorts under the theme, “Torn Between Lovers” at Cinema Diverse: The Palm Springs Gay and Lesbian Film Festival at Camelot Theaters in Palm Springs.

“I had all these tomatoes that I had grown in the backyard and they were sort of starting to rot, so I decided to have this dinner party,” To says.

Three of his guests wound up in his short film, which was spurred by a Canon film contest To decided to enter.

“I just decided to go for it,” says To (pictured below). “I hadn’t done something for a while. The contest was based on photos, and you would select 10 photos and design a story around it.”

The story revolves around the reunion of two friends, Vince (Vince Maggio) and Stephen (Stephen Twardokus), and the complication presented by Vince’s wife, Jen (Jen Oda). Stephen is hoping to rekindle a childhood romance with Vince, who is now married to Jen, and as the movie asks, “Does love really conquer all?”

This will be a homecoming of sorts for To, who used to shoot covers for Palm Springs Life magazine as a freelance photographer a decade ago. He answered a few questions about his film.

How did you pick Palm Springs to debut Dry Dock?
“I thought about it as actually a perfect place to premier, and there is no guarantee that I would get into any of the bigger festivals any way without really having huge names in it, which seems to be the name of the game nowadays. I had been to the Palm Springs International Shortfest with “Audit”. I just remember how meaningful that festival was to me. I stayed with Michael Childers and John Schlesinger. I think John had suffered a stroke, but I just remember how meaningful it was because he attended my first screening. At breakfast the next morning, John really wasn’t able to speak so much after the stroke, but he just blurted out of nowhere, “That was a really cute film you did.” It was such a meaningful thing to hear from such a renowned director like him toward the tail end of his life.” What happened to your film in the Canon contest?
“I knew the subject matter I chose was going to be edgy and probably too daring for their contest. We didn’t get in the top 20 entries, which was what I was hoping for but I just knew that I chose edgy and it was supposed to be kind of PG13. I wanted to do something that I saw was true to me, something I was interested in and a little bit more daring.”

The Short of this Film
• To and Twardokus wrote the script in two days
• The film was shot in two days. To used his guesthouse and pool, and a friend’s boat as the two settings. The boat owner attended the same dinner party.
• Composer Stephen Viens wrote a majority of the score after coming to the read-through.
• His next door neighbor, Leora Glass, a commercial producer, organized the film’s production.

The scene where Stephen Twardokus is handed a water hose, points it at his head and spays himself. Why was this a case of getting something great out of a mistake?
"Vince was nowhere to be seen to hand the water hose to Stephen. I had to do it, and Steven was pissed that he wasn’t in the shot. It is kind of almost like a mistake but then when he grabbed the hose he kind of squirted himself because I was sort of farther away and out of frame and he squirted himself in the face. The expression on Stephen’s face was just so like … he looked so upset. I think he was upset because I was the one holding the hose and Vince wasn’t. It wasn’t like the way it was supposed to be, but if it was the way it’s supposed to be then I would have never gotten that reaction or that shot."

If you were to make this into a full-length feature, would the story change?
“I’m thinking but it will be a little bit more like a thriller, meaning some people have died in the first act. It will seem a little bit scarier or thriller-like. Then Stephen goes to see his friends because he needs a new place to stay, and that’s kind of what this short might be a nice teaser to, that’s sort of what we are working on now and to see where that takes us."