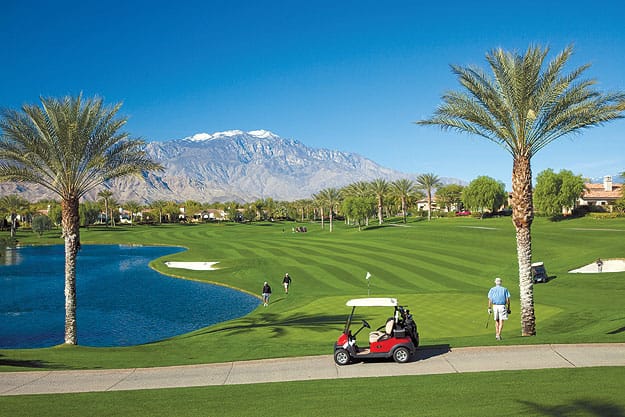 DUFFERS WELCOME!
The private Toscana Country Club in Indian Wells has added shorter tees to its Jack Nicklaus Signature South Course so beginner and skilled golfers can play together. The new tees were added in conjunction with the PGA’s national Tee It Forward. An avid supporter of the initiative, Nicklaus worked with Toscana to create the new 4,550-yard, par-72 option.

UltraStar Cinemas, which operates 134 screens at 13 theaters in Southern California and Arizona, has begun installing its copyrighted Pure Digital Cinema (digital sound and picture) at the Mary Pickford Stadium 14 theater in Cathedral City. UltraStar is investing about $1 million in converting all 14 Pickford screens to digital and has no plans to increase prices. The project began in September and enables the theater to present “alternative content,” such as Hungarian Rhapsody – QUEEN LIVE in Budapest ’86, which screened in late September. Completion of the conversion is expected in time for the holiday movie season. “It opens the doors for all sorts of additional, expanded movie experiences, such as D-BOX motion seats, 3-D, and high-frame-rate presentation,” says Damon Rubio, vice president of operations for UltraStar Cinemas.

PAVING THE WAY
Marrakesh Country Club, which will host a designer showcase during next year’s Modernism Week, recently completed Phase 1 of replacing its asphalt streets, parking lots, and entrance with interlocking pavers. A combination of Hollywood Regency architecture and Moroccan influences, the Palm Desert development encompasses 364 houses. Given the size of the project (65,000 pavers in Phase 1), Farley Interlocking Pavingstones of Palm Desert used machinery capable of installing up to 4,000 square feet of pavers in a day. SINGING A NEW TUNE
Tony-winning Broadway composer Jerry Herman sold his Mediterranean-style Palm Springs house for $1.1 million, according to HOM Real Estate Group. The new owner of the five-bedroom, six-bathroom estate was not revealed, but apparently bought smart. Herman reportedly paid $1.5 million for it in 2004.

A NEW TOURISM NICHE?
NewParent (www.newparent.com) encourages its expecting readers to “take a babymoon” at Palm Springs’ Korakia Pensione. Relish coupledom, reconnect, and enjoy some romance in “a veritable oasis blending Moroccan and Mediterranean architectural styles … and a backdrop of the San Jacinto Mountains.”