Desert Developments, Like Disney's Cotino, Raise Bar in the Valley 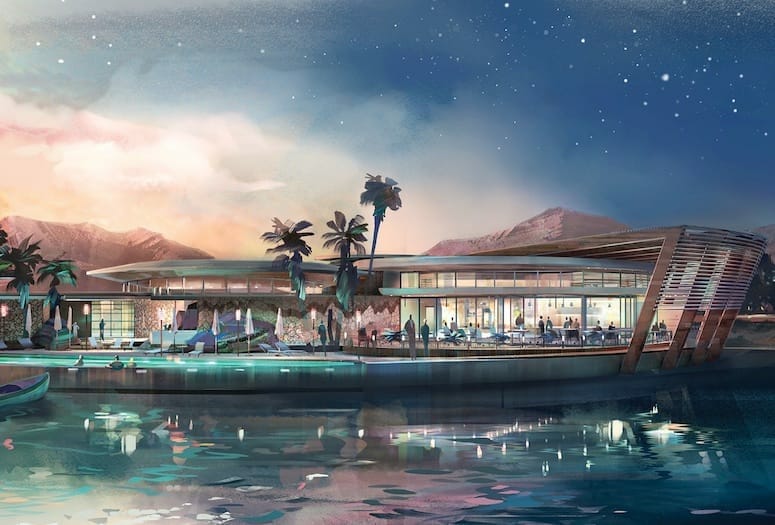 RENDERING COURTESY COTINO, A STORYLIVING BY DISNEY COMMUNITY
The member clubhouse at Cotino in Rancho Mirage.

Editor’s note: On Sept. 21 — after the publication of our October issue, in which this article appears — the La Quinta City Council unanimously rejected Coral Mountain’s plans to develop their surf club (mentioned herein). During the council meeting, residents against the development voiced concerns that primarily centered around water usage during California’s historic drought.


The allure of the desert lifestyle — clean air, constant sunshine, poolside lounging, tennis, golf, and horseback riding — captured the imagination of the rich and famous as early as the 1930s. Celebrities such as Frank  Sinatra, Kirk Douglas, Marilyn  Monroe, and Rock Hudson; political giants including Dwight D. Eisenhower, John F.  Kennedy, and Ronald Reagan; and visionaries like  Raymond Loewy and Walt Disney came to Greater Palm Springs to escape, play, and sometimes make a home.

Since those halcyon days, the popular resort destination has grown and evolved, serving successive generations of A-list personalities, but also expanding the landscape for full-time residents from many other walks of life. In keeping with the times, resorts and communities have been adapting and upgrading to meet changing expectations and sensibilities — sometimes with surprising results.

On one end of the spectrum is the old guard, familiar resorts such as La Quinta Resort & Club, established in 1926, with its five championship golf courses and  41 pools, and the 450-acre JW Marriott Desert Springs Resort & Spa, as well as luxurious country clubs, including The Vintage Club, The Madison Club, PGA West,  Bighorn Golf Club, and Tamarisk and Thunderbird country clubs. Each invests millions in renovations to their clubhouses and diversification of their social and recreational offerings to freshen their appeal to newcomers.

On the other end are smart new resorts and communities with a wild and luxurious slate of amenities — places like  Sensei Porcupine Creek and Coral Mountain Surf Resort.

“Today’s buyers want more than the usual amenities,” says John Burge, former president of Palm Springs Regional Association of Realtors, noting that many homebuyers are looking to enrich their lives. “They want easy access to hiking trails and good restaurants; and they want to know about live theater, events, and what’s in the works in each city.”

And they’re willing to pay. In the three-month period ending in June 2022, the average number of homes sold for  $1 million or more in the Greater Palm Springs area increased slightly to more than 200 per month compared to the same period in the prior year.

Along with home buyers, those vacationing in the area are also pursuing more than their parents could have dreamed. 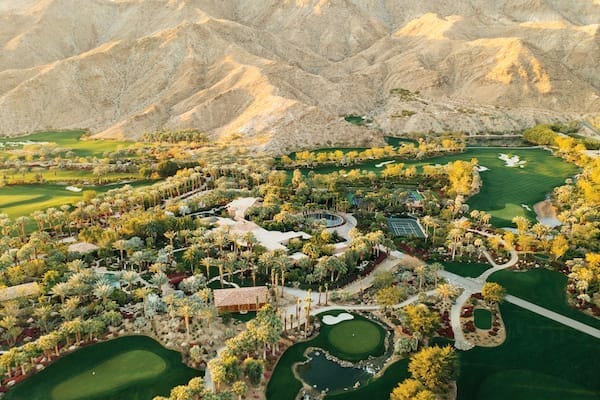 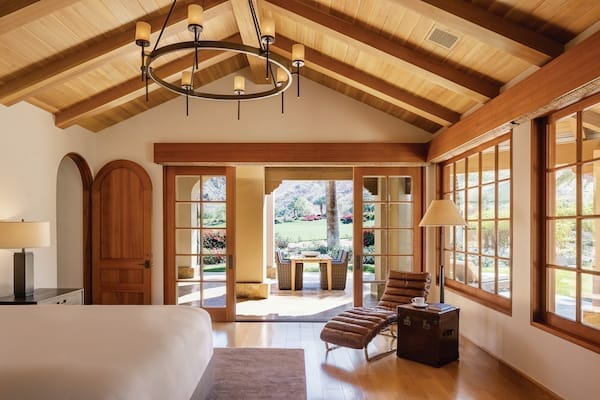 In Rancho Mirage, nestled in a cove in the Santa Rosa  Mountains, Larry Ellison’s Sensei Porcupine Creek well-being retreat offers guests a data-driven journey to healthier living. Under the direction of Dr. David Agus, professor of medicine and biomedical engineering at USC Keck School of Medicine in Los Angeles, Sensei focuses on preventative care and healthy lifestyle practices. The tranquil, lush setting alone provides ample relief, and the other amenities — world-class golf and tennis facilities, wellness activities, and the dining mastery of Nobu focusing on Sensei’s nutritional philosophy — are a bonus.

The appeal of “new and improved” — the intersection of innovative and conventional lifestyles — is the siren song of almost all marketing departments eager to appeal not only to retirees, but also to active and affluent professionals who are still working, amassing wealth, and interested in next-gen amenities.

With Coachella and Stagecoach music festivals  producer Goldenvoice leasing the Empire Polo Club property in Indio for the next 50 years, promising expanded, almost year-round live entertainment, developers are capitalizing on the opportunity to accommodate visitors. The new Strut Oasis compound of generous vacation rental estates, for example, lists proximity to the polo grounds among its many amenities.

Developers are also challenging the look and feel of  traditional communities to meet changing demographics and preferences. 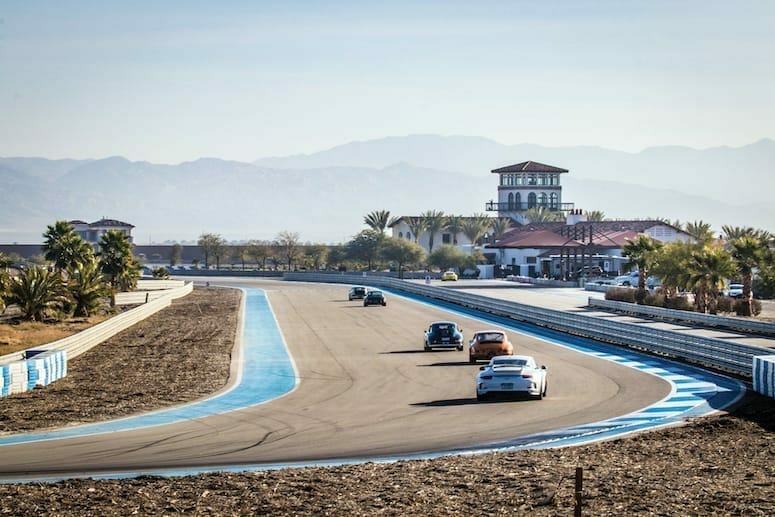 PHOTOGRAPHY BY JOHN GRAFMAN
BMW Performance Center in Thermal. With race tracks instead of golf courses, The Thermal Club caters to motorsports enthusiasts.


In many respects, The Thermal Club operates with the same tried-and-true formula as a development with a members-only golf course, except instead of endless greens, this club features a trio of racetracks with 20 possible configurations — one of few places where drivers can explore their inner Mario Andretti and not find themselves behind bars. 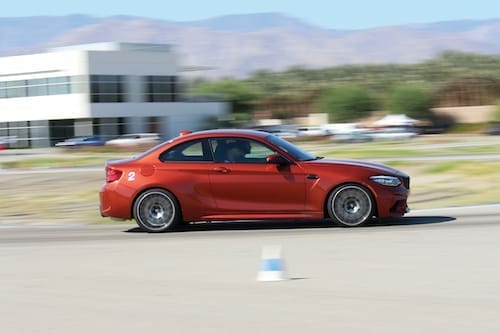 Here, the community will max out at 272 homes (50 of which are already built). Most of the luxurious, owner-occupied custom residences have garages suited to auto  aficionados. As a bonus, the nearby Jacqueline Cochran Regional Airport allows residents and guests to come and go with great convenience.

John Rogers, who co-owns The Thermal Club with his parents, Tim and Twanna Rogers, says residents pay a minimum of $1.7 million for a lot and membership before construction. They created the development for motorsports enthusiasts, not for investment prospectors, he adds. However, given the limited supply of membership racetracks in the country, this could also prove to be money well spent.

Complementing the Thermal Club is the open-to-the-public BMW Performance Center. Those with a desire to exercise a new Beemer can take advantage of the high-speed course. BMW offers schools and other learning opportunities taught by pro drivers. 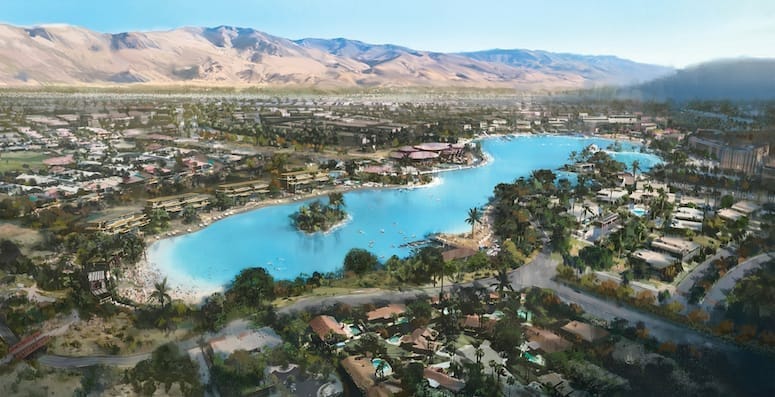 Meanwhile, Cotino, a Storyliving by Disney  Community, has broken ground on more than 600 acres in the heart of Rancho Mirage. You won’t find Cinderella’s castle here, but developers suggest the neighborhood will have that Magic Kingdom aura. Think of Tom Sawyer Island meets New Orleans Square with a touch of Jungle Cruise from  Adventureland — with activities like standup paddleboarding in the 24-acre grand oasis, shopping, dining, and live entertainment for residents and guests.

“We cannot wait to welcome the first residents in 2024,” says Thomas Mazloum, president of Disney Signature Experiences, adding that Cotino “will combine the Disney hallmarks of attention to detail, storytelling, and guest service to create a place where residents can live the next chapter in their lives to the fullest.”

Disney is partnering with Scottsdale, Arizona-based DMB Development on the massive, mixed-use community, which includes a lagoon, separate 55-and-up neighborhood, as well as a hotel property. “We are developing this new community in a way that provides a breadth of housing options, is sustainable, and shows that we have thought deeply and carefully about the area’s culture and history,” says Brent Herrington, CEO of the development company. “We want to create a community that will benefit not only residents, but also the surrounding region.”

Developers enjoying a favorable moment for new building seem fearless in their appeals to new buyers and visitors. 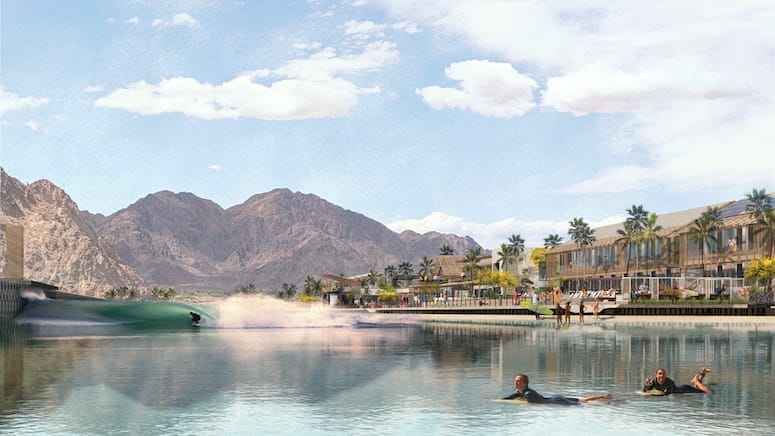 Surfers will likely have a new home in the desert with the introduction of Coral Mountain Surf Resort, offering an endless summer with nonstop waves in La Quinta.

The 400-acre resort will include tennis and pickleball courts, pump tracks, plus plenty of space for cycling, running, walking, skateboarding, says Noah Hahn, managing partner of the development firm Meriwether Companies. But the prize amenity is a perfect, manmade wave rolling out every three minutes, powered by Kelly Slater Wave Co. technology. 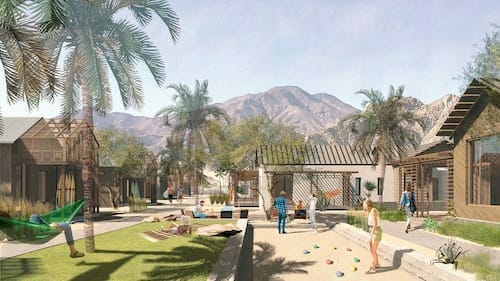 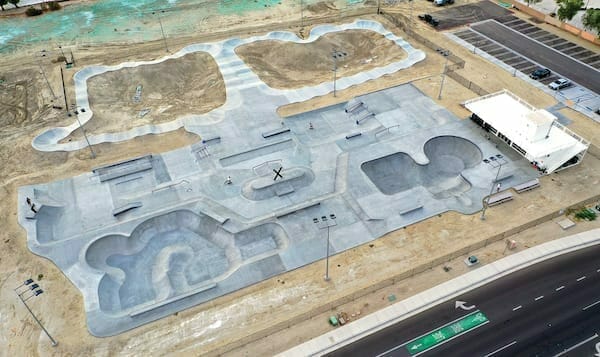 The development will feature 600 homes zoned for full-time residential use and short-term vacation rentals, as well as a hotel and retail stores. Identifying hundreds of surfers with at least $2.5 million to drop on a “beachside” villa in the desert was easier than one might think. 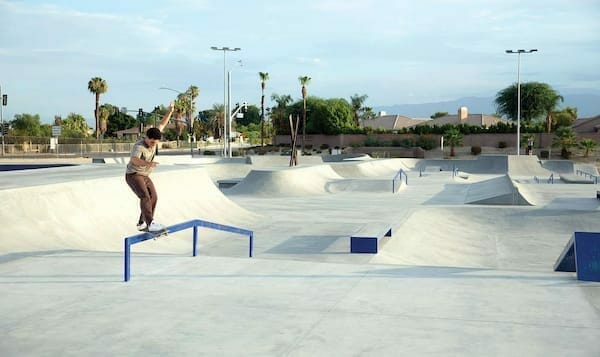 PHOTOGRAPHY COURTESY SPOHN RANCH
Designed by Spohn Ranch, the new, 40,000-square-foot X Park in La Quinta features a concrete pump track and a street course with a variety of stairs, rails, and ledges and three distinct bowls that cover the spectrum of skill levels.

“We raised all of the equity we needed to build Coral Mountain in less than a year, during a global pandemic,” says John Gamlin, president of CM Wave Development LLC. “The equity investors were motivated not principally by an investment opportunity, but by passion for the Coral Mountain vision, which embraces the lifestyle and ethos of surfing.”

Indeed, developers enjoying a favorable moment for new building seem fearless in their appeals to buyers and visitors seeking outdoor activities and adventure, just as people did decades earlier. Walt Disney, who lived in Smoke Tree Ranch in Palm Springs, loved horseback riding, playing polo, and lawn bowling. It’s comforting to think he’d be first on a paddleboard at the Cotino community that bears his name — and contributes to the radical progress of luxury resorts and communities in the Coachella Valley.