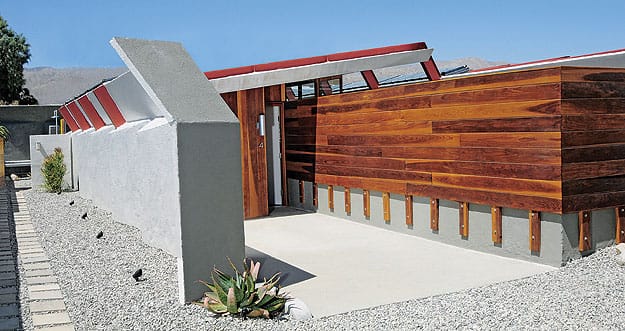 Most people don’t realize they’re familiar with the architecture of John Lautner. If you’ve seen Die Hard, Pulp Fiction, The Big Lebowski, Lethal Weapon 2, or Charlie’s Angels, you’ve seen a piece of Lautner architecture. With their bold use of angles, space, and light, Lautner’s buildings seem custom-made for the cinema. When legendary James Bond set designer Ken Adam first laid eyes on Lautner’s Elrod House in Palm Springs for 1971’s Diamonds Are Forever, he described it as “very modern and fabulous.”

So it’s no wonder Lautner’s first construction in the Coachella Valley — the only hotel he ever designed and the only Lautner building open to the public — has a Hollywood backstory. In 1947, Lucien Hubbard (producer of the first Best Picture Oscar winner, Wings), commissioned then 36-year-old Lautner to design a complex in the wilds outside of Palm Springs — a retreat for Hubbard’s movie-star friends. The four-unit structure was to serve as a prototype for a 600-acre, master-planned community of 100 buildings.

“We actually have the blueprints for the community they planned,” says Tracy Beckmann, who owns the newly opened Hotel Lautner with partner Ryan Trowbridge. “They were going to build a bunch of these little Lautner units along with restaurants and stores. It was going to be the ultimate desert compound.”

Up to that point, Michigan-born Lautner had about 20 commissions under his belt after moving to Los Angeles in 1938. He designed for Hubbard four adjoining 600-square-foot, trapezoid-shaped rooms topped by slanted roofs of Gunite (sprayed concrete used for swimming pools), supported by steel I-beams. Large wood-framed windows look out to private, walled desert gardens, making each room feel “like you’re in a cacti aquarium,” as Beckmann puts it. “Lautner put in this string of skylights against the wall that create film-noir shafts of light during the day. At night, you can stargaze up through them from your pillow.”

Karol Lautner Peterson recounts: “Each room is its own world. My father did spend time at the site, so he knew which way the sun came in and which way you could see the mountains, how the winds affected the site. … The kitchen was small and so neat. I made tomato soup for dad in the kitchen. It was like a large doll house to me as a young child.”

Despite the ingenious interiors, the complex from the outside had the aesthetic appeal of an Army bunker. Famed architectural photographer Julius Shulman, a friend of Lautner’s, said that the locals thought the building was a secret government project when it was built in 1947.

As a protégé of Frank Lloyd Wright, Lautner lived by his mentor’s organic architecture philosophy of blending buildings into their landscapes. The design of Hotel Lautner was also a deliberate act on Lautner’s part to deflect the desert sand and wind. “Most architects are grandiose from the outside. But it’s hard to spot a Lautner,” Beckmann explains. “They’re sunk into the earth and the landscape.”

Like most things that survive in the desert, the structure’s story is one of resilience. It has endured earthquakes, harsh sun, blowing sand, flash floods, and alternating years of abandonment and abuse as a low-rent apartment building. It wasn’t until 2000 that the complex received a new lease on life when the late Steve Lowe resurrected it as Desert Hot Springs Motel.

Lautner’s youngest child, Judith Lautner, was an infant when her father built Hubbard’s retreat, but praised Lowe’s renovations of the once-derelict building. “I think he brought it to the point that my father would have just been delighted to see,” she says.

After Lowe died in 2005, the property went on the market. “Ryan and I came across it in 2007,” Beckmann recalls. “We were paying homage to Lautner with a commercial building we had in Silverlake. When we found out he had done a hotel, we ran out to the desert the next day. We fell in love with it. When we opened up the door to room No. 3, we heard the voice of God!”

They decided right then and there to buy the defunct hotel and made an offer of $325,000 for the million-dollar-plus complex. “They laughed; we laughed. But we ended up getting it for $425,000,” Beckmann says.

That was the easy part. What ensued was a meticulous facelift that took three and a half years. A flash flood delayed the hotel’s opening and required Beckmann and Trowbridge to construct a wall around the quarter-acre property to protect their guests and their investment. It was a blessing in disguise, as the complex — with its large fire pit, hot tub, and patio with a grill — now has the feel of a private retreat — and can be rented as such.

To save money, the new owners did much of the work themselves. “Ryan felt like his back was broken, and I had no fingernails for years!” Beckmann laughs. Swamp coolers from the 1980s were removed, kitchens were modernized, custom beds were built, tractors delivered boulders for landscaping, and amenities like iPod docks, Wi-Fi, and flat-screen TVs were added. The materials for the refurbishing and redecorating cost the new owners just $300,000. You’d never know it, with the Frette linens, L’Occitane bath products, Heath tiles, and furniture by name designers.

“We did our best to renovate as Lautner would,” explains Beckmann, a Lautner devotee since she was a child. “But he was a huge fan of revisiting his sights and modernizing them. He would make updates for clients. He thought forward, and he renovated true to form.”

Hotel Lautner was already a resounding success upon its soft opening in March 2011. A list of around 600 people patiently waited over the years to book a room, and the hotel officially opened in September. The owners are attracting hipsters, Hollywood types, and, of course, architecture buffs. Each room is filled with books and DVDs about Lautner to educate the uninitiated.

Beckmann’s retro interior designs incorporate eras from the 1920s to the 1970s, without seeming campy or forced. A $2,500 Falcon chair may sit below an inexpensive midcentury painting from a Pasadena flea market, and it all seamlessly works.

On all of her projects, Beckmann collaborates with Trowbridge. The award-winning, Michigan-born artist and designer specializes in custom, high-end metal furniture and sculpture for restaurants, hotels, and private homes.

Trowbridge was the one who stripped the concrete walls of Hotel Lautner down to their original bare surfaces and discovered up to 20 former colors. “The wood that came with the building was ruined by paint and rot. You could push your finger right through it,” Beckmann says. He carefully reinstalled the original window glass around new redwood frames and accents, sometimes letting the wood sit and acclimatize for a whole year before installing it to avoid contraction and expansion.

Although Trowbridge owns a few commercial spaces in Los Angeles, Hotel Lautner is the first project he and Beckmann have owned together. The two met in 2005 and, although no longer involved as a couple, “subsequently became best friends and business partners,” Beckmann says. “We held on to the good part.”

They also own a quarter-acre of adjoining land and may create sister rental properties in the future. For now, they have their hands full reimagining Lautner’s vision. The architect’s daughters have visited the hotel and become Beckmann and Trowbridge’s friends, applauding them for the painstaking efforts.

“The place has had so many lives,” Beckmann says. “We want to respect it again, instead of it being the redheaded stepchild in the desert.”