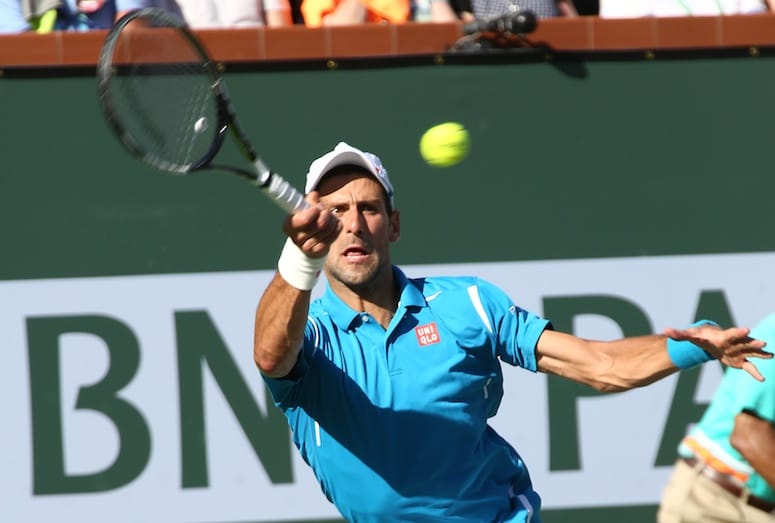 Novak Djokovic brought his A game to the desert again Saturday afternoon, and the more he does it, the more he is reducing the rest of the men’s tennis tour to a bunch of B-minuses.

He won his way into Sunday’s final, where he will have a chance to become the first five-time winner of the BNP Paribas Open at Indian Wells.

He beat a three-time champion and a player once as dominant as Djokovic is now. Rafael Nadal played hard and ran hard and fought hard and lost, 7-6 (5), 6-2.

Djokovic will play a huge-serving Canadian in the final, and if you watched Milos Raonic pulverize David Goffin of Belgium with 140 mph serves in his 6-3, 3-6, 6-3 victory, you might think Raonic has a good chance. Maybe a chance. Certainly not a good one.

Djokovic has been No. 1 since July 7, 2014. He has taken his advantage over the once-invincible Nadal to 25-23 and has beaten the always-game Spaniard now six straight times and 10 of 11. The last time Nadal beat Djokovic was in the 2014 French Open final, and as dominant as Nadal has been in that major tournament — winning it nine times, including five in a row — you might favor Djokovic this year if the two meet again. “He’s an amazing player, with a high level of confidence,” said Nadal, who was, not too many years ago, exactly that. “He feels that he is better than the rest, and that means nothing bothers him.”

Nadal said that not out of anger, but out of respect.

Djokovic now has a chance to win his 26th ATP World Tour Tennis Masters 1000 Series. That’s one behind Nadal, and, at 28, Djokovic is a year younger. Reaching the finals at Indian Wells makes that 18 of his last 19. The one he didn’t make it was because he defaulted earlier in the tournament with an eye infection.

At the moment, Novak Djokovic is too good to beat. He is so good it is almost hard to believe. Seeing him play takes care of that.

Raonic, who has not won in five previous matches with the Serbian star (he has won one set) has a healthy understanding of how impossible it is to beat him at the moment.

“His patterns are to sometimes try not to have patterns,” Raonic said.

Because of his serve, Raonic is known as “The Missile.” Be aware of possible shoot-downs in the desert Sunday. The crowd of 16,100 people delighted in Novak Djokovic's dominance.

The Raonic-Goffin match gave the Indian Wells crowd a leisurely warm-up for the match of the day, the one with all the buzz. It takes something very special to get 16,100 people to sit in 90-degree heat and bright sun for nearly two hours and, apparently, enjoy every minute.

The scene was mildly World Cup-ish. There were Serbian flags and Spanish flags and chanting between points and constant pre-point oral outbursts that kept the chair umpire busy. It was as much active fan commitment as this event has seen.

It was also amazing how something with such a predictable outcome can still create such a stir.

Much of that was the presence of Nadal, who may have faded a bit in the rankings, but whose competitive heart has never slowed down. Sports science needs to clone it.

In the first set, he got a fortunate early service break when Djokovic had trouble finding his service toss in the desert sun. Nadal saved two break points at 3-3 and kept charging after he lost a set point at 5-4. The inevitable tiebreaker found Djokovic ahead, 5-2, after Nadal had contributed three missed forehands for the first three points for Djokovic. But Nadal, as stubborn as a dog with a bone, got it back to 5-5, before yielding two points later. Milos Raonic will offer up a big serve for Novak Djokovic to deal with.

The second set was similar to the first in that Djokovic would hold serve comfortably and Nadal would battle long and hard just to do so.

Finally, serving at 2-5, Djokovic, gliding left and right like he was on a skateboard, got a match point. Nadal saved it. Djokovic got four more. Nadal saved them all. Finally, on match point No. 6, Nadal missed a forehand and the struggle, just three minutes shy of two hours, was over.

Djokovic saluted the crowd, did an on-court interview, hit three autograph balls into the seats and walked off calmly. Rumor had it he broke a sweat, but there was no independent confirmation of that.

Asked afterward if he ever amazes himself at his ability to rise the occasion at the right times, Djokovic said, with nary a degree of arrogance, “I am trained to do that.”

“If I play against him (Djokovic),” Nadal said, “it’s because I am in the semifinals and finals, and that’s very positive news.”

So not only is Djokovic No. 1 and currently almost untouchable, he has also become a measuring stick for Rafael Nadal.

No other words are needed.