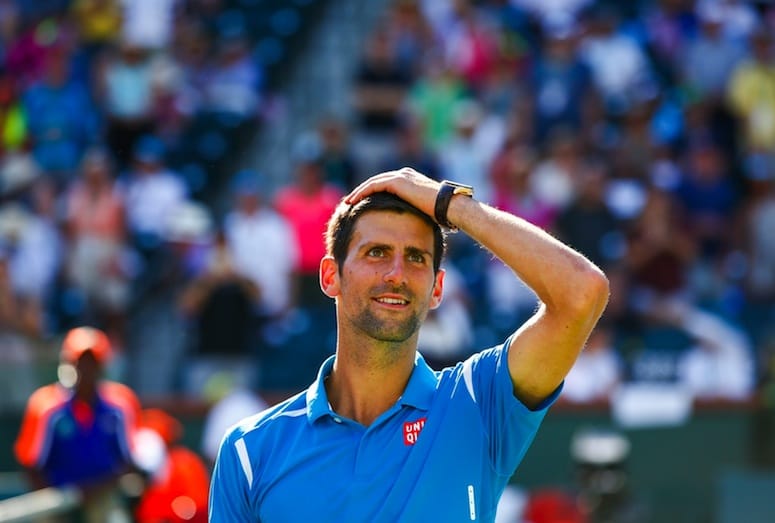 Saturday at Indian Wells will bring a classic meeting of the minds — two of the more competitive, stubborn minds in sports. Magic Johnson won’t be there, but it will be Showtime.

The men’s semifinals of the BNP Paribas Open will feature Novak Djokovic versus Rafael Nadal. This is when the pizzazz peaks. For this, you pay the big bucks and feel like you got a deal. If you have tickets for Saturday, you should have them locked in a safe overnight.

Djokovic is No. 1, Nadal No. 4, both in national ranking and seeding here. The only downer is that it is a semifinal, not the final. That’s because Nadal and his ranking have slipped a bit in recent years from a time when he was nearly invincible. Now, it is Djokovic who is nearly invincible.

Still, if the brackets say it is 1-versus-4, and that 1 and 4 are Djokovic and Nadal, the buzz is loud. These are two of the greatest tennis players ever to slip on a wristband. They have played 47 times and Djokovic has a dominating 24-23 lead. Yup, it’s that close. They got through their quarterfinals here with varying difficulty, on a day hot enough to melt the soles off their shoes.

“It’s the desert,” Djokovic said. “We know we are going to have warm days and wind. We have to accept the challenge.”

Nadal got through his match first, after getting into a hole at 1-3 and 15-40. But he climbed out, saving seven of eight break points in the first set, and effectively dominating Kei Nishikori the rest of the way. The score was 6-4, 6-3.

Djokovic had it a bit tougher, as veteran Jo-Wilfried Tsonga did what he so often does — play a great match against a great player and falter in the key moments. Djokovic served for the first set at 5-4 and Tsonga broke. That eventually sent the set into a tiebreaker, and steady Tsonga reverted to wild-hitting Tsonga and Djokovic won, 7-2.

Tsonga battled hard to get the second set into the same position, then went walkabout again in the tiebreaker, with a double fault and several flailing ground strokes. It was a 7-2 tiebreaker score again, and a mirror image final of 7-6 (2), 7-6 (2).

The tale of the tennis tape on Djokovic and Nadal speaks precisely to the proper level of anticipation for a super Saturday showdown. Novak Djokovic has been ranked No. 1 for 87 consecutive weeks now, and 189 overall.

Nadal has won 14 major titles, and shares second place all-time with Pete Sampras, behind Roger Federer’s 17. Nadal has also won all four majors at least once, a career Grand Slam, as well as an Olympic gold medal. Djokovic, with 11 majors, was one match shy of filling the one gap on his tennis resume when he lost in the final of last year’s French to Stan Wawrinka. He won the other three Grand Slam tournaments last year.

The Indian Wells tournament is one of a series of big events given status a notch below the Grand Slams. Most recently, they are called the ATP World Tour Masters 1000 Series. The tennis suits will meet in the off season and change that descriptor again, making sure the fans continue to be confused.

In those Masters Series events, Djokovic has won 26 times and Nadal 27. Federer is next with 20. Nadal won eight straight Monte Carlo titles, usually as he warmed up to win the French Open. Djokovic has won 10 of the 18 contested in the series in the last two years. Djokovic lost to Nadal in the 2014 French final, Nadal’s most recent major. Rafael Nadal lost to Novak Djokovic in their most recent meeting.

They have played just three times at Indian Wells. Nadal won the 2007 final, and Djokovic the 2011 final and the 2008 semifinal match.

Nadal was asked about the 6-1, 6-2 rout he underwent at the hands of Djokovic in Doha, in their most recent match. Djokovic has won the last six, and nine of their last 11 matches.

“Was easy for him, no?” he said …” Novak played unbelievable, and when he plays that way, it is so difficult to stop him. Nothing to say about that match other than to offer congratulations to him.”

He was also asked about their personal relationship, known to be a good one.

“At the end of the day, as I said hundreds of times, that’s the game. That’s sport. Relationship and friendship is more important than anything.”

So, Saturday, two friends will come onto a huge tennis court, with all 16,100 seats likely to be filled, to match up in a game of tennis, wits, and willpower. Expect 30-stroke rallies. Expect jaw-dropping shots and spine-tingling comebacks. Expect crowd noise that tests the decibel meter.

But until it is over, don’t expect friendly.