Do You Have The Look? 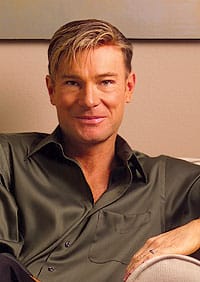 William Squire started his parents in the modeling business when they were in their 70s. Now in their 80s, the Salt Lake City seniors still field calls to appear in print ads and TV commercials. Their resumés include an appearance in Duran Duran’s music video for “Come Undone.”

“It isn’t just a young person’s game anymore,” says Squire, who at 45 is working as much now as he did in his 20s. A resident of Palm Springs, Los Angeles, and Maui (he visits each a couple times a month), Squire generously shares what he learned the hard way. He teaches a variety of classes at modeling schools and agencies and is co-author with Laura Boulay of The Model’s Workbook. In February, the professional models/authors held a two-day workshop at the Miramonte Resort in Indian Wells.

“You see so many people attempting this career and going about it the wrong way,” Squire says.

Classically trained in ballet from age 8 and dancing professionally with Salt Lake City’s Ballet West by age 17, Squire segued into modeling at 18. “It was one of those great things where I was sitting at [an agent’s] desk when she got a call that a male model didn’t show up.”

Despite being in the right place at the right time, Squire says that on his way to success, he committed every mistake highlighted in his and Boulay’s book.

After dancing with Ballet West, touring in off-Broadway musical comedies and performing in the Lido show at the Stardust in Las Vegas, Squire left dancing to pursue modeling full time at age 23. He moved to Los Angeles, the epicenter of agencies, and signed on with Max Talent Agency, a division of Wilhemina Talent Agency, and Judith Fontaine Modeling Agency. (He now has agents in New York, Los Angeles, Salt Lake City, and Palm Springs.)

Squire walked the runways for Yves Saint Laurent (his favorite designer), Versace, Armani, Calvin Klein, and other major collections. He traveled the world and walked the catwalks at the premier Fashion Week in Paris. His face and figure have appeared in nearly every major fashion magazine.

With his experience, he suggests, Squire can teach anybody to walk like a runway model. In addition to the two-day workshops, he and Boulay are launching America’s Catwalk Challenge — a Web-based nationwide competition that collects votes and awards the winners a donation to the charity of their choice.

That’s for fun and a good cause. His classes and book are serious.

“[Modeling] has to be a career, and you have to treat it like a career,” he says. “You have to take the necessary steps to make sure that you are successful.”

That’s the theory behind The Model’s Workbook, which eschews a completely narrative format for a workbook with blanks to be written on. It guides potential models through selecting a photographer, creating a portfolio and resumé, finding an agency, preparing for shoots and auditions, and managing a modeling career.

Squire says modeling got “a bad rap” in the late 1980s and early ’90s, when misperceptions took hold that only the tall and waiflike could be models. In fact, he says, there’s a lot of money to be made by all types of people and classic looks play a smaller role than believed — witness his own parents.

Squire developed sections of The Model’s Workbook as he guided his parents through the process of becoming models. The book identifies a variety of model categories: high fashion, editorial fashion, catalog/product, runway, specialty, commercial, petite, and plus size.

A consultant for Chanel, Squire models and conducts demonstrations for Saks Fifth Avenue when he is in Palm Springs Valley. When he’s not working, he focuses on a visual context you’ll never see on the catwalk. “I gaze at the [natural] beauty,” he says. “I love it. I know I will eventually end up here full time.”