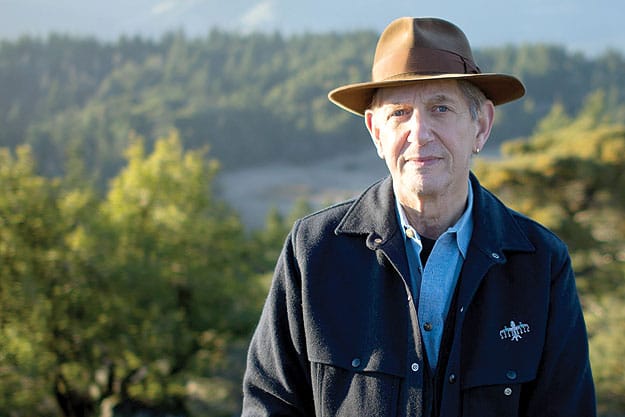 Someday, someone, somewhere will create a fascinating documentary about the life of Peter Coyote. Until then, he’s happy working from the other side of the camera.

Coyote will be feted in absentia at the American Documentary Film Festival, beginning April 4 at Camelot Theatres in Palm Springs. Coyote will receive the Making a Difference, One Film at a Time Award for his contributions to documentary film. Coyote was scheduled to appear at the event and read from his autobiography, Sleeping Where I Fall, but a film project has taken him abroad.

“Peter, of course, thought it was a unique award and was extremely flattered, especially that we are acknowledging him specifically within this genre,” says festival Director Teddy Grouya. “In this genre, Peter Coyote tops them all.”

At the event, Grouya will show footage of Coyote speaking with him and accepting the award. “I’m going to film him with the award, so we can play it for the audience,” Grouya says. “Peter also has told me he will do voiceover for our ads leading up the event.”

If Sleeping Where I Fall is ever adapted into a documentary, it will be endlessly fascinating. The book, published in 1998, details the wild life of a spiritual seeker and formerly restless rebel who has found peace of mind as a Zen Buddhist priest.

Coyote, who appeared in movies ranging from E.T. The Extra Terrestrial to Sgt. Pepper’s Lonely Hearts Club Band, is among the most sought-after narrators of documentary films. He has narrated more than 165 films and has been the voice of the Academy Awards.

Coyote was born Rachmil Pinchus Ben Mosha Cohon on Oct. 10, 1941, in New York. After moving west to Marin County in 1964, he became a countercultural figure as part of a radical, anarchist street group called the Diggers, who distributed free food, provided free medical care, and sponsored free concerts in Golden Gate Park. They also burned money. “We imagined a world in which we could live authentically, without the pressures of economics dictating our personal choices. We made it real by acting it out,” he recalls.

Like many seekers beginning to feed their heads and souls at this time, Coyote was developing his political consciousness. These stranger-than-fiction tales make Sleeping Where I Fall an amazing journey.

While the book is a stellar achievement, Coyote’s transcendent speaking voice earned him the most acclaim. He is the voice of many of Ken Burns’ documentaries and the winner of a 1992 Emmy for narration. He also narrated the opening ceremony of the 2002 Winter Olympics.

Coyote first achieved notoriety as an actor, director, and screenwriter with the San Francisco Mime Troupe, a radical political street theater whose members were arrested for performing without permits in parks. Coyote directed the first cross-country tour of The Minstrel Show, or Civil Rights in a Cracker Barrel. Authorities in several cities refused to allow the Mime Troupe to perform their uniquely shocking play.

Coyote was introduced to Zen Buddhism through the work of the Beat poets, especially Jack Kerouac. After reading about it, Coyote began to meditate regularly. He moved into the San Francisco Zen Center and was later ordained a lay priest in the Soto tradition. Coyote performed the audiobook recording of Shunryu Suzuki’s Zen Mind, Beginner’s Mind and narrated the documentary Inquiry Into the Great Matter: A History of Zen Buddhism.

Coyote became a member and chair of the California State Arts Council in 1975. After his first year, Coyote was elected chairman by his peers and remained chair three years running.