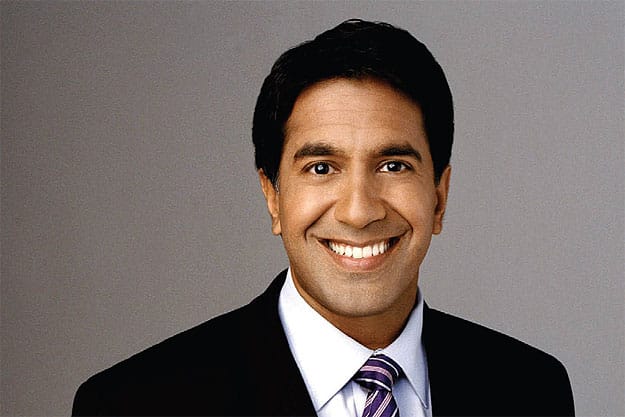 Healthy behaviors are as infectious as the flu, Dr. Sanjay Gupta says.
CelebMirror.com

He performs warzone neurosurgery, advises top politicians like Hillary Clinton, and wins Emmy Awards for CNN. For Dr. Sanjay Gupta, this is all in a day’s work — sharing his knowledge for the greater good. Forbes recognizes him as one of the top influencers, Time cherishes his regular column, The New York Times lists him as a best seller, and Palm Springs Life caught up with the doc who never lets his brain rest — which is sort of the point of what he told us. He prescribes simple advice to pump up your vitality.

So many health problems are largely related to what we eat. What dietary tips can you offer?
• In Japan, you push your plate away when you are 70 percent done with your food. The longest-lived cultures have smaller plates, which trains and tricks the brain into eating less.
• Avoid confusing thirst for hunger. The part of your brain that tells you when you’re hungry and when you’re thirsty is the same. A lot of times, you walk around dehydrated, and you think you’re hungry.
• Your stomach tells your brain you’re full 15 minutes after you finish eating. So wait before going for a second helping; you can either become full in that short amount of time or cram down a lot of calories.
• Low fat seems to be synonymous with eating healthy, but low fat means adding sugar, and sugar can hurt your body — and quickly. Cut back on sugars and sodium.

What “superfoods” are good for the brain?
Take fish oil every day. It’s one of the only things that can help brain inflammation and heal its delicate tissues. If a major pharmaceutical company were producing it, it would be a billion-dollar company, but because it’s natural, it’s rarely taken as seriously. Fish oil is relatively cheap, with a potentially huge impact on our brain.

Is forgetfulness inevitable as the brain ages?
The brain is like any muscle. If you don’t use it, it will atrophy. But at any age, that can be reversed. It is trained, and it can be retrained. Babies are born with 90 percent of their brains developed, and they start to disconnect what they don’t use and start growing the parts that they do. So if you discourage or encourage a child, the same will happen. You have to keep your brain active. Learn another language, open a cookbook, do some gardening, and try to exercise your brain in as many new ways as possible.

Do you think doctors prescribe drugs more often than needed?
Yes. It’s easier to write a prescription than to spend time with a patient. Eighty percent of the world’s pain medicine is prescribed in the U.S.A., and it’s no coincidence that there is an accidental drug overdose every 19 minutes. Many countries, like Costa Rica and Thailand, are outliving us, and they don’t take all the prescriptions, have the facilities, or spend the money we do.

What are blue zones, and what makes people live longer in these regions?
Dan Buettner has done amazing research in longevity hot spots that he calls blue zones. Places such as Sardinia, Italy; Okinawa, Japan; and Icaria, Greece are places where the people are living longer than Americans, and their quality of life and overall health is remarkably better. People are three times more likely to reach their 90s. Older people have half the rate of heart diseases and a third less cancer than we do, and their minds stay sharp as well. These blue zones have a lot in common. Families are close, hard work is the norm, and there is no such thing as retirement.

How do you combat stress?
Studies show people who nap five times a week have less heart disease. For me to take a nap is next to impossible, but finding ways to get rid of every day anxiety can be as simple as a meditation, a walk, or a prayer. Healthy behaviors are as infectious as the flu, and loneliness can be as bad for you as a smoking habit. So surround yourself with good people and try to get six hours of face-to-face interaction everyday. As a whole, we are not as communal as we use to be. Fifteen years ago, on average, we had three good friends each and today we only have 1.5.