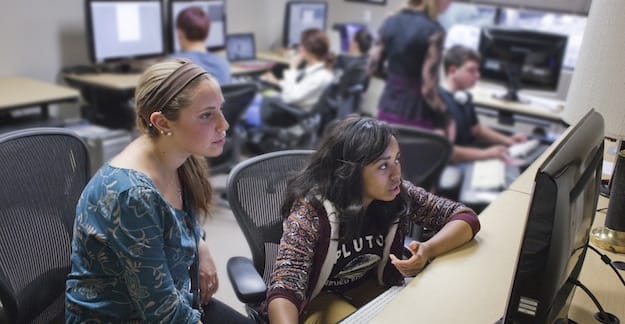 Many high school graduates have no clue what they want to do or where they will be in five years.

Unless you are Katherine “Tia” Kearns.

The 18-year-old is already an accomplished film director whose short documentary, “ A Family Like Mine”, will screen at the highly regarded Palm Springs International ShortFest, which runs June 18-24.

"I am very exciting and so honored to be selected for the ShortFest,” Kearns said. “I am happy people like the film and are willing to see it. I’m thrilled it’s getting out there and giving a different view of what gay families are like.”

Her documentary began as a high school project at Idyllwild Arts Academy, and explores the issues and experiences growing up in a gay family.

“ I was in a documentary class at school and I’ve always been interested in families like mine,’ Kearns said. “I also wanted to show people what my own family was like.”

Adopted as a baby by a white, single, gay father with HIV, Katherine’s story is both personal and poignant.

“Ultimately, I did not make this film to change people minds about gay families, but to bring awareness so that they can make their own decisions,” Kearns said. “I did not want to be preachy, but give a real insight into the love shared in gay family.”

Her film speaks volumes in demonstrating that her family is not so unique. Speaking with Katherine, personally, you are reminded that despite her poise, intelligence and talents in film production, she is in some ways a typical teenager with a great sense of humor, big dreams and a strong love for her father.

Were you ever made to feel different because you had a gay father?
“Yes, in both positive and negative ways. I was lucky to go to progressive schools and meet nice people, and they are more accepting that I have this cool family. But at the same time, I sort of wanted to meet others like me and not be so different. When I was younger, I wasn’t fully aware of my family situation and I was uncomfortable explaining to people. People ask rude questions or approach you differently. I’ve learned from this, though.”

What would you say was your biggest challenge growing up with a gay dad?
“Honestly, my biggest challenge is still trying to get my Dad to stop singing show tunes in grocery stores. You know, Liza Minnelli down aisle seven can be embarrassing!”

Your father, Michael Kearns, is a well-respected actor, writer, director, and teacher.  How has growing up with a gay dad that is also a public figure influenced you?
“My Dad is awesome. I think him being in the performing arts and a well-known activist in the LGBT community inspires me because he has done so much, and he is respected. He’s always been open about our family. Any questions were answered honestly with an open minded and positive response. I think as a parent you have to be open minded and love, and be willing to encourage your family so others will be open, too.”

Did your Dad’s artistic background inspire you to go into the arts?
“I definitely thought it would be really cool for both of us to be actors. Then, I found I liked working behind scenes, creating and making stories.”

Were you nervous interviewing your Dad for the film?
“I think it’s weird for anyone talking to parents about important things and with a crew it was certainly awkward. But Idyllwild allows you to express yourself and it went really well. I also learned more about my Dad. I was moved by his story about being a child sent to the psychiatrist because his Mom thought he might be gay and the psychiatrist saying that he knew that my father just really wanted to be a Dad. And he really is the best Dad ever.”

What is the message you would like your audiences to take away from the film?
“I want people to know that gay families are just like other families. That love is love no matter what.”

Katherine has just finished a comedic short film, “The Amazing Allen”, and will attend Bournemouth Arts University in the fall where she will pursue film production with a specialty in directing fiction films.

"A Family Like Mine" screens at 5 p.m. June 19 at Camelot Theatres in Palm Springs as part of an LGBT evening of short documentaries. The 2013 Palm Springs International ShortFest features 330 films. For more information, visit www.psfilmfest.org