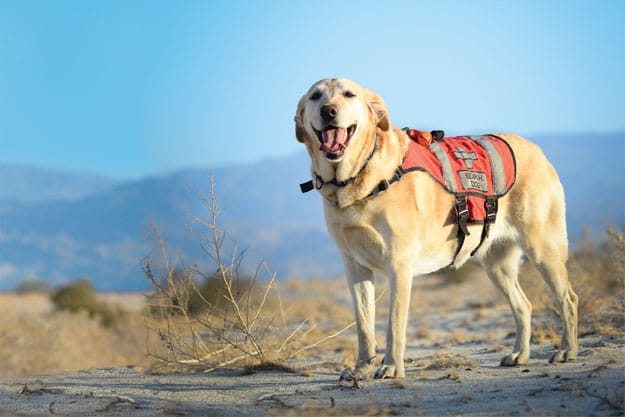 Dogs perform some tasks better than people do. With sharp minds, strong spirits, and fit bodies, dogs can get a lot done in a day’s work. They give unconditional, immediate affection to people who need it most. They use their acute sense of smell to locate people, bombs, illegal drugs, and even cancer. They act as eyes for blind people. Dependable, loving, and loyal, dogs work to please. And when you see them in action, it’s much easier to understand the phrase “working like a dog.”

Palm Springs Life set out to meet some of the most impressive canine employees in the desert, and they were eager to show their mettle.

Cache (seen above), a 4 1/2-year-old golden retriever/Labrador retriever mix, jumps up and down with excitement because she knows she’s about to receive a command to “find.”

“Search and rescue is a big game of hide and seek for our dogs, and Cache loves to play the game,” says Terry Bierfreund, Cache’s human companion, who rewards the dog with praise and treats when she finds someone. When given the command, Cache takes off like a gunshot.

“Even though I have been doing search and rescue for more than 10 years, it’s still so exciting to see dogs work,” says Bierfreund of Cathedral City. “I can actually see her catch scent in the air and work out where it’s coming from. I see her body language change as she gets closer to the missing person. When she makes the find, her whole body wiggles. Then she runs back and sits in front of me to let me know that she has made a find.”

Bierfreund and Cache volunteer for several government agencies, and they’re on call 24/7. Cache holds certifications in area search, or air scent; trailing (wearing a lead and harness and searching for someone after sniffing an article of their clothing); and searches for the deceased on land (even buried in rubble) and in water.

In this field, the dog and handler must trust each other — especially when the adventure puts them in uncomfortable or unfamiliar places, such as in a helicopter or on a boat. To stay sharp, Cache and Bierfreund train once or twice each week with members of the Search Dog Resources team. On the oncology floor at Eisenhower Medical Center in Rancho Mirage, Scruffy, a cairn terrier mix, visits a cancer patient who has lost all of her hair as a result of chemotherapy. Scruffy leaps onto the bed, walks behind the patient’s head, and licks her earlobes. Surprised, Scruffy’s owner and handler, Richard Waxman of Palm Desert, tells the dog to come down. But with joy showing on her face, the patient says, “How does Scruffy know that my ears are so sensitive from the chemo? Please don’t make him stop. I haven’t felt this good in weeks!”

Waxman says that therapy dogs are “very special people.” In 2000, he founded Paws & Hearts (www.pawsandhearts.org), a volunteer group of amazing dogs and their owners, who offer a special kind of therapy to hospitals and other healthcare centers. Pet therapy, experts say, is a remarkably effective element of recovery.

Scruffy — “with Toto’s head and a body by Buick,” Waxman beams — is a 9-year-old with an intuitive understanding of what each patient, whether a child or an elderly person, needs to gain a measure of comfort and happiness. Like all good therapy dogs, he is a great healer by nature, knowing instantly whether to be gentle or playful. “Therapy animals understand human frailties better than humans ever will,” Waxman says. With a distinctive spring in his elegant stride, Alex the Afghan hound is the picture of perfection for his dignified breed. The 7-year-old champion show dog won best of breed at the Kennel Club of Palm Springs Dog Show in January.

Alex, who was born in Australia, was winning shows in Sydney when he was only 4 months old. He was shipped to Kerry Pope of Rancho Mirage when he was 7 months old.

“I’ve owned, shown, and bred Afghans for more than 40 years,” Pope says of the aristocratic sighthounds. “It runs in the family. My mother owned Alex’s grandmother Lola, the top-winning female Afghan hound of all time in Australia.”

Pope knew Alex was special the moment they met. Much friendlier than most Afghans, Alex warmed to Pope immediately, and they’ve since been inseparable, competing throughout the United States and Canada. The American grand champion has sired three litters of puppies, all of which have become successful show dogs.

Pope bathes Alex every five days to keep his long, silky coat in perfect condition. “It takes about five hours to bathe and blow-dry his coat,” he says. But for Pope, it’s a labor of love — and befitting of a breed that the American Kennel Club calls “a king of dogs.” Palm Springs Police Officer Luciano Colantuono has been working with his new partner for almost a year. Four days a week, they are inseparable on the job. They face all kinds of danger, difficulty, and adventure and help each other through thick and thin. But unlike many officers in the department, Colantuono’s partner is a dog: a 2-year-old Belgian malinois named Kane.

Intelligent and trainable, the breed is popular with police and military for its strength, agility, and strong desire to work. “Kane is all work, and he doesn’t [have an interest in] making friends,” Colantuono says, noting that his alert, high-energy partner responds to commands given in German and English.

Palm Springs Police Department recruited the Czech Republic-born dog because of his extensive training in criminal apprehension, handler protection, and many types of tracking. A day in Kane’s life as a patrol dog can be demanding. He may be called upon to handle anything from an alarm call to the pursuit of an armed felon.

Each day, the partners train hard in a range of drills that simulate crime scenarios. Lithe and keenly alert, Kane sprints when given the command to chase a decoy or leaps through a ring that might be hard even for a circus performer to clear. Kane follows strict commands at all times and performs at the highest level, even when he is exhausted.

Kane goes home with Colantuono every night, and their bond has grown beyond partnership into companionship. Greg and Peggy, both 2 years old, are in the second of three phases of their guide dog training — and they love their jobs.

“When we’re choosing a new puppy to train, the two most important attributes we look for are confidence and work ethic,” says Emily Goodland, Guide Dogs of the Desert’s orientation and mobility specialist and personal trainer to Greg and Peggy. “Greg, the yellow lab, will turn himself into knots just to make you happy. Peggy, the golden retriever, focuses intently on her work, with her ears pinned back, strutting in her harness.”

As puppies, the dogs learned basic obedience and socialization in a home environment. When they were 18 months old, they came to Guide Dogs of the Desert’s Whitewater campus for about six months of formal training with Goodland. Next, they’ll complete a month of intense training on campus with their own visually impaired handler. After dog and handler graduate, they become an official team for the life of the dog.

During their time off, Greg and Peggy enjoy playing with each other and the other dogs in training. They may be heroes with highly specialized skills, but in every other way, they’re like regular dogs. Their favorite activities include retrieving toys, playing in the water, rolling in the grass, and getting lots of love and affection from their trainers.