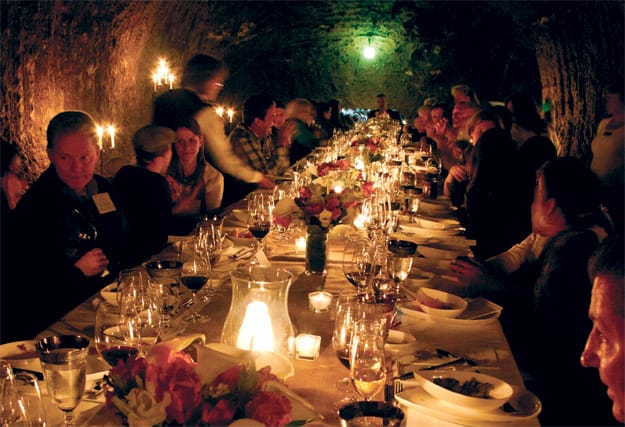 Firm grip. Elbow locked. Look out, not down. Forty-five-degree angle. Follow through. Smile.

This is a scene from a camp unlike any other: Camp Schramsberg, a two-day educational experience in Napa wine country. Opening a bottle of sparkling wine with a saber harkens back to the days of Napoleon (though, Peterson notes, he probably did it on horseback). It’s not a necessary skill for understanding sparkling wine, but it’s a great “party trick.” And learning the sabering technique is best with someone else’s sparkling wine (there was some bottle loss).

Here’s another scene that dispels any visual evoked by the word “camp”: oysters on the half-shell, caviar-topped potato “roses” on a skewer (“stem”), and flutes of 2005 Brut Napa Valley Carneros. Those elements, followed by a candlelit dinner in the Schramsberg wine caves with more wine (including a 2004 library cabernet sauvignon — the winery’s only still wine), marked the Friday-night reception when some 30 campers met each other, Schramsberg Vineyards owner Hugh Davies and winemakers Keith Hock and Sean Thompson and received their Camp Schramsberg ballistic nylon bags filled with goodies and their camp notebook.

After a gourmet breakfast at the luxurious Meadowood Napa Valley resort in St. Helena the next morning, spring campers (Schramsberg also offers a fall camp) board a bus to the chardonnay vineyard of 95-year-old Jack Tognetti, who sells his grapes exclusively to Schramsberg. We’re going to learn how to prune vines to yield the best crop possible. It rained Friday and throughout the night, so the ground is wet, to say the least. But this is camp. So, after a brief talk on what we’re expected to do, we retrieve gloves and clippers and soldier into the mud on either side of an unpruned row of vines (the one row saved for Camp Schramsberg).

We’re shown how to select which vines to cut and where (two buds up). But we’re tentative, knowing (because they tell us so) that mistakes can cost a year’s time in a vine’s productivity. Sure it’s just one row among the 146 acres from which Schramsberg culls chardonnay grapes. Nevertheless, Tognetti has graciously entrusted us with at least a small portion of his livelihood. I noticed the cold only until I began pruning; I’m still cognizant, however, of the mud filling the treads and coating the sides of my heretofore-white sneakers.

When our work is done, we pour ourselves cups of hot Starbucks Pike Place coffee, thoughtfully set out on a vineyardside table. One suspects the professional pruners (two brothers who work this vineyard) are not afforded the same luxury. But then they get paid to prune; we’re paying to prune.

Back on the bus (donuts and muffins provided), we head to the Schramsberg winery in Calistoga. Part I of our tour there ends among fermentation tanks, where we learn that the liquid sugar added to create secondary fermentation in the bottle is the same sugar used to make Jelly Bellys, which perhaps explains why I like Schramsberg sparkling wine and Jelly Bellys (a pairing, I note to myself, worth exploring at a future date).

Then it’s back to work. We sit around tables in “the barn.” Before us are five glasses identified A, B, C, D, and E: unfinished chardonnays from stainless steel tanks, each from a different vineyard. These are not wines you want to swallow. In fact, I’m wondering about the advisability of even subjecting my taste buds to them. But our job is to discern specific characteristics in the aroma and palate and rank them in order of our preference. Next we do the same with chardonnays from barrel lots. A hush hovers over the room as campers devote their full concentration to the task. While I strive to write intelligible comments in my notebook (I’m only accustomed to finished wines), I’m drawn to marvel at the skills required of professional winemakers.

The top vote getters from the tank and barrel chardonnays will be blended with pinot noirs (selected the following day) to serve as the core of Schramsberg’s 2010 vintage of the wine we enjoyed at Friday night’s reception. Future campers will see our names on the camp alumni list (provided in the notebook and dating back to 2001). While I know the winemakers will not let us fail (after all, their own reputation is on the line), I can’t help but think how nice it would be to have my name associated with the winery’s “best Carneros brut yet.”

Back at Meadowood, our labors are re-warded with a three-course lunch paired with 2004 extra brut and 2007 crémant demi-sec made primarily (67 percent) of flora grapes (a cross of sémillon and gewürztraminer). Then Peterson guides half the campers through sabering the bottles we’ll be drinking in the next stage of our education: pairing foods with chardonnay-based sparkling wines.

We sit with three wines before us: blanc de blancs, brut rosé, and the premium 2004 J. Schram. A tasting tray includes tarragon, toasted almonds, cream, smoked salmon, lemon, roasted pear, green apple, puff pastry, choux puff, and seared ahi tuna. Guided by Peterson, we test the 30 possible permutations to learn what characteristics the foods bring out in the wine. After a short break, we face the dessert setup: three wines (crémant demi-sec, blanc de blancs, and brut rosé) with tastes of wedding cake, crème brûlée, strawberries, chocolate mousse, lemon curd tart, melon, and almond tuiles. Some combinations evoke the famous café scene in When Harry Met Sally; a few elicit comments such as “It looks good on paper, but just don’t do it” or “like a fish trying to ride a horse” (the latter from Peterson herself).

As if we haven’t been given enough food and wine throughout the day, an optional dinner features a gourmet meal and library wines (including a 1986 crémant demi-sec). Camp life can be rough.

Day Two begins with another gourmet breakfast and bus ride back to the winery for the blending of the chardonnays we chose the day before with pinot noir. We begin by judging ratios of stainless to barrel chardonnay; then we judge ratios of the top vote getter with pinot noir. When the final votes are tallied and winemaker Keith Hock finds the winning combination differs from his favorite, he says, “This is where some executive decisions have to be made.” (See? I knew the winemakers would save us from potential disgrace.) Whatever the final result, I feel vested in the 2010 vintage of Schramsberg’s Brut Napa Valley Carneros. If the other campers share my sense of affinity, when the wine is released in 2015, I’m sure Schramsberg will sell at least 30 bottles. I wonder if I should buy futures.

With our blending duties completed, we embark on Part II of our winery tour. Davies offers some historical perspective before we head into the caves that date back to the 1860s when Chinese laborers used picks and shovels to carve out 10,000 square feet. The caves have since been expanded; at the end of harvest, they may hold up to 2.7 million bottles, Davies says. I do some quick math and determine that I could “lay low” in these caves for a long time.

But for now, it’s back to work. After a demonstration of riddling (the process of rotating bottles in a rack to coerce the yeast into the necks for disgorgement), we don safety glasses and prepare to execute the rhythmic pattern we’ve heard and seen executed by the pros.

Having observed our lack of proficiency with riddling, I’m not surprised the disgorgement demonstration is not a hands-on one. After the bottle necks have been run through a machine to freeze the yeast gathered there, the cap (like you find on soda) is popped and the pressure in the bottle shoots it out cannonball-esque.

Back in the caves, we learn how sparkling wine evolves through a vertical tasting that begins with the just-disgorged 2009 Brut Napa Valley Carneros, then taste both a pre-dosage and finished 2005 vintage, finishing with the 2001.

After a group photo with the winemakers in the rain, we board the bus for the last time (box of freshly made cookies on the front seat) and head back to Meadowood. After the second half of the campers saber bottles, Peterson leads us through a pairing of pinot noir-based sparkling wines (blanc de noirs, brut rosé, and 2003 reserve). In addition to a tasting tray with crème fraiche, pancetta, toasted hazelnuts, lemon dressing, basil, and raspberries, we have lunch items (mushroom tart, frisée with champagne shallot vinaigrette; two preparations of salmon; and berries with sabayon, pomegranate sorbet, and blood orange sorbet) to pair with the wines.

To round out the experience, Camp Schramsberg returns to a traditional camp activity: team competition — though this is more cerebral than physical. Each team must devise a scenario and multicourse menu featuring five sparkling wines we’d tasted over the past two days. Peterson and Davies select the winners and then present every camper with a Camp Schramsberg certificate of completion tucked into Sparkling Vineyards, a coffee-table book signed by Davies that his parents wrote about the winery’s early days. As I reflect on camp and read about the trials the Davies overcame to realize their dream, I recognize that I may never have the fortitude (let alone financial resources) to make my own sparkling wine. But I can open a bottle with a saber — and that’s enough for me.