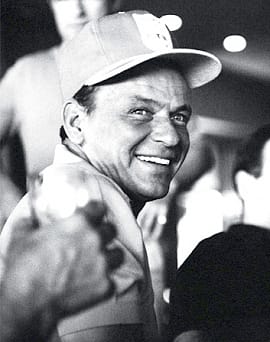 In recognition of 20 years of golf and parties for a worthy cause, Palm Springs Life asked Barbara Sinatra to reflect on the history of the event begun by her and her late husband.

How and why did the tournament get started?
Frank always loved to get together with friends; we both golfed and were active in the community. At the time, we were involved with the Barbara Sinatra Children’s Center, which had opened a few years before at Eisenhower Medical Center. We were also involved with Desert Museum [now Palm Springs Art Museum], Temple Isaiah, and Desert Hospital [now Desert Regional Medical Center]. Our plate was pretty full. Frank had thought of getting together some buddies — Sammy Davis Jr., Dean Martin, and others — and putting on a charity golf tournament, with proceeds split between the Children’s Center and Desert Hospital, a nonprofit at the time. We organized things and had fabulous support from celebrities, golfing friends, and the people at Canyon Country Club. On a windy day about 20 years ago, we played golf; had great laughs; Frank, Dean, Sammy, and others entertained at our “gala” in the clubhouse; and a tradition was born. It was never a problem getting friends to support or help organize, which is very gratifying. We didn’t realize it then, but the tournament would grow beyond anything we could have imagined.

Frank loved, absolutely loved, being with friends — preferably if they were Italian! We entertained quite a bit when we were in the desert, most often small groups at casual dinner parties. We started with drinks in the kitchen, with Frank sometimes at the stove — he making sausage and peppers and me fixing a pot of pasta. Nothing makes a party more successful than good conversation and dear friends. We wanted the golf tournament to have the feeling of our dinner parties — a little party in the desert.

Your husband was quoted as calling the tournament his “little party in the desert.”
One year, Frank gathered his buddies and decided they would cook all the food for the gala. He called Dominick from Dominick’s Restaurant, Vito Musso, and a few others. They all went into the kitchen at the Canyon Country Club, put on their big chefs’ hats, and began to cook for 800 people! Frank had the guys making “sauce” and meatballs, and of course it was delicious and everyone had a fabulous time. It was very gratifying to see the energy and enthusiasm, all to benefit the Children’s Center and Desert Hospital.  That’s the type of entertaining we liked to do.

One of the most fun tournaments was a performance by Robert Wagner and Mike Connors at our nightcap party for Platinum Circle golfers. R.J. and Mike Connors were known on the Beverly Hills party circuit for their riotous rendition of “Our Love is Here to Stay,” a normally touching and beautiful love song. It was a treat for our guests that they could not experience anywhere else.

I’ve read that Frank Sinatra’s last performance in front of an audience was at a party on the closing night of the 1995 tournament. Did people have a sense of its significance at the time?
I don’t think at the time we thought it might be his final performance. He had just returned from a concert in Japan with Natalie Cole. Frank had been working since he was a boy, really, and looked forward to spending more time at home — quiet time doing crossword puzzles, painting, playing with our three King Charles spaniels, listening to his opera records, entertaining, and going to local restaurants.

We liked to spend time together, whether it was watching television, reading, or sitting by the pool. And we were both more than ever devoted to the Barbara Sinatra Children’s Center. Our life was full. Tournament time and the months leading to the event were — and still are — very hectic, but very rewarding. Our home on Frank Sinatra Drive was the hub of the operation, and we loved it. He liked to know everything that was going on. His performance at the 1995 gala was flawless and a very special experience for everyone in the room. The stage was Frank’s home in so many ways, and nobody did it better. The audience may have sensed his performances might be more infrequent; but that night, Blue Eyes dazzled them!

Was there any consideration during the final years of your husband’s life or immediately after his passing of not having the event anymore? If so, what led to the decision to continue?
Frank was the tournament, and our golfers loved being in the same room with him — breathing the same air. It was like that the world over. We knew we wanted to continue the tournament, but weren’t sure what type of response we would receive from our golfers and supporters. Well, their love for my husband and respect for his commitment to the Children’s Center were stronger and more enthusiastic than I could have hoped. Frank and I always wanted our tournament guests to have a first-class experience, and we have not wavered on that. The amateur and celebrity golfers at each tournament since 1998, when he passed away, are family. They are passionate about our event — generous and loyal. Countrywide, our title sponsor, is as committed as ever. I love Angelo Mozilo and David Sambol, both with Countrywide, for their advice and dedication. We have gained sponsors in recent years and are more profitable than ever. All is good. Frank would be proud.

How were the first tournament and related events after your husband passed away any different, by design or not, from past events?
Since Frank passed away, we have more of an emphasis on his Italian American heritage. He was so proud of being Italian. John Salamone, executive director of the National Italian American Foundation, is a great supporter. Communities with large Italian populations, where Frank was greeted like a hero at concerts, are well represented: Providence, Philadelphia, New York, Buffalo, and especially Chicago — all great cities — have golfers and spectators at the Sinatra Countrywide event.

There is a great expression that says “Frank Sinatra songs are the fabric of our lives.” That fabric had become, both by design and not, the essence of our golf tournaments.

This year is the 20th anniversary tournament, and we will have more of an emphasis on Frank than ever before: his music, the movies he made, foods he loved, philanthropy, and friends. And you’ll see a lot of orange — his favorite color.

How has the tournament changed since the early years, and how has it stayed the same?
The tournaments are bigger each year: larger gallery, more golfers, more sponsors, and a larger donation to the Barbara Sinatra Children’s Center [proceeds are no longer shared with Desert Regional Medical Center, now owned by Tenet]. All tournament proceeds are now directed to the Sinatra Center. But, the camaraderie, personal attention to our guests, creativity, commitment to being first-class all the way, and stellar entertainment have not changed — and never will. These qualities are what we have become known for; they are what Frank would expect. Golfers tell us last year’s tournament was one of the best ever, if not for having Frank with us. And many fabulous plans are in store this year: Thursday night’s Concerto Karaoke and Pasta Alla Sinatra party and Friday is Frank’s Favorite Foods Buffet, among other great plans. We are excited to have Liza Minnelli perform at our gala. She toured with Frank, Dean, and Sammy all over the United States and overseas for “The Ultimate Event.”