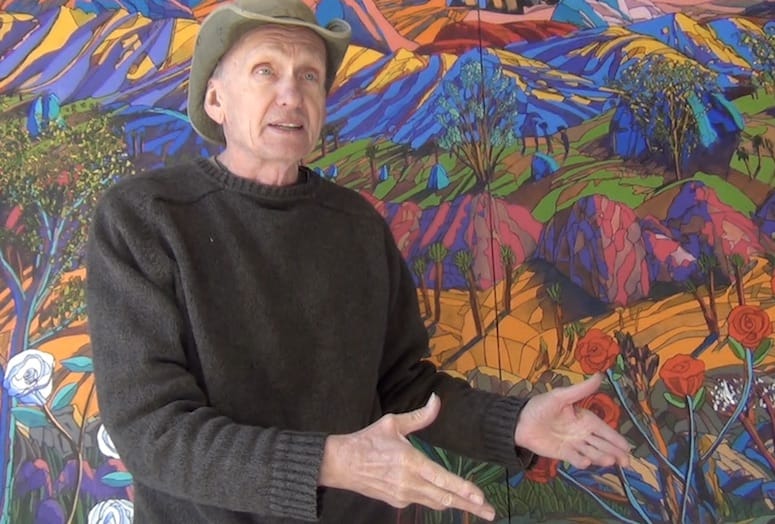 Don McPherson doesn’t have to go far to be inspired.

The Yucca Valley artist has a Joshua tree growing outside his front door, and beyond the dead end street he lives on are trails leading out into the desert. When he sets out each day for a walk, McPherson is exercising more than his pet Rottweiler. He’s discovering his next work of art.

“I like a more natural environment,” McPherson says of his attraction to the desert life. “I take my dog for a walk before the sun comes up and after the sun goes down, just kind of like night walking. I study these plants that I put in my pictures. I don't take pictures of them, but I've been doing these walks for 17 years with different dogs. That's what I paint. It's my interpretation of it.

McPherson is a classically trained artist who received his education at the Rhode Island School of Design and the Art Center College of Design in Los Angeles. McPherson’s recent work revolves around scenic oil paintings of the desert environment he lives in.

“It’s a kind of grid or spiderweb, all the lines are interconnected visualizing a spiderweb…” says McPherson when describing his style of scenic painting, “…like interlocking lines to go all the way to the edges of the canvas…” McPherson’s paintings have a stain glass-like appearance giving his scenic work a unique look that stands out.

McPherson credits his invention of flat color combined with pointillism for his art’s uniqueness. “They are opposite experiences which causes the eye to really react to this (the painting).” These opposite experiences McPherson refers to relate to seeing something that is visually simple right next to something that is visually complex. In the case of McPherson’s work, this is when he puts an area of flat color right next to an area of thousands of tiny dots to create an extreme contrast between the two.

McPherson will showcase his work at the 32nd annual Southwest Arts Festival, Jan. 24-27, at the Empire Polo Club in Indio. The fest features more than 250 artists presented by the Greater Coachella Valley Chamber of Commerce and the Indio Visitors Bureau.

McPherson sat down with Palm Springs Life to talk about how he keeps his work original, and what goes into preparing for an art festival.

How far would you say your interest in art goes back to?

I did a portrait of myself when I was 5 years old. It was fairly comprehensive, I think, as I recall. I wanted to do it. When I was a very young child, maybe 4, 5 years old, I'd walk into a room, the thing I would see would be the pictures on the wall. My interest would go immediately to every picture on the wall. I was fascinated by them.

Would you say the valley inspires more of your scenic work?

All I have to do is walk out the door of my house, and there's a giant Joshua tree right in front of me, so it's really easy for me... In fact, I could be painting a picture and I might say, well save it. I'll go outside and look at my own tree. Then I'll come back in and put it in the picture. I like the terrain up there. I like desert vegetation.

How do you keep your work fresh and original?

I'm trying to improve it or develop it. Art has to be developed. I hate to say it in case it's not accurate. I think it was Van Gogh who said to Gauguin, "It takes so long to develop an art form that once you get it, you forgot why you wanted to do it to begin with." It's sort of like that. You get to the end of this thing, and a few pictures, and that starts to unravel a little bit. Then you've got to step it up again. I just keep changing things and developing and making things better. I won't do exactly the same thing for very long.

How do you decide what kind of work you want to show at the Southwest Arts Festival?

It is inadvisable to show more than one's style at an art fair like that, even though I have a lot of styles in reality. It just confuses the visitor too much. You see, they have a lot of people to look at. I'm just one person. They're coming by, and it has to be simple, clean, but inviting at the same time.