In 1954, only four years out from earning his Bachelor of Architecture at University of Minnesota, Donald A. Wexler came to Palm Springs from Los Angeles (where he worked under Richard Neutra) to work in the office of William F. Cody. There he met architect Richard A. Harrison and the two formed a partnership. Then, he needed a family home.

For Wexler and his young bride, Marilynn, the architect was sketching a flexible blueprint designed to live in right away and expand later as needed, one where he could eventually raise his children and host pool parties with the Harrisons, captured in grainy home movies. For Greater Palm Springs, Wexler was making a career commitment. From his custom yet inexpensive home base, completed in 1955 and featured in the Los Angeles Times Home magazine in 1958, he helped sculpt the face of the city, dropping in modern archetypes in glass, concrete, and steel. 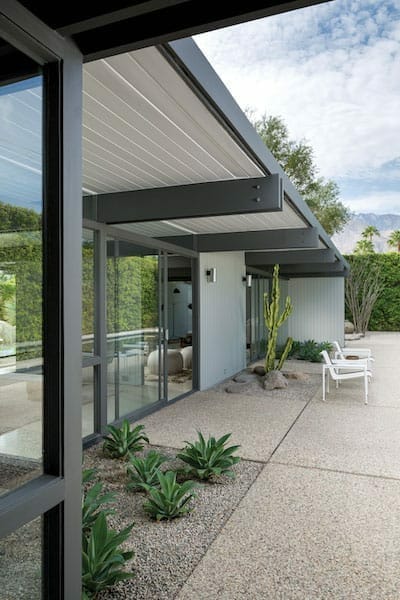 His flat-roofed, L-shaped house “is a fine example of Wexler and Harrison’s signature midcentury modern post-and-beam style of the period,” notes Steven Keylon, who wrote the Class 1 Historic Resource nomination on behalf of the Palm Springs Preservation Foundation. It was unanimously approved last November. “The home has remained remarkably intact and was restored by Lance O’Donnell of o2 Architecture in collaboration with Wexler himself.” Distinctive modernist characteristics from lack of ornamentation, and floor-to-ceiling glass shielded by deep overhangs to the use of natural materials supported its Class 1 candidacy. “As far as an architect’s own home being designated Class 1, the only other is Albert Frey House #2.”

In 2019, the sole home Wexler designed for himself was listed in the National Register of Historic Places. “The residence was one of a group of important Wexler-designed buildings nominated at the same time by Palm Springs Modern Committee that included the Dinah Shore Residence, the Steel House Historic District and its seven contributing dwellings, and the Palm Springs Airport Terminal,” notes Peter Moruzzi, who wrote the nomination. The airport entered the register last November.

“Our home was easily adaptable, easy to expand, and it looked seamless,” says son Gary Wexler, who grew up in the original two-bedroom, two-bath abode and saw it evolve. “It gives me a lot of pride to show the house to my daughter and the generation that never lived there, knowing it’s going to be around for generations to come. Now that it’s protected, it is probably going to look just as beautiful 50 years from now as it did then.”