Of all the technical achievements to come out of World War II, the most underrated may be pre-fabricated buildings. After the war, these techniques were adapted for civilian use, one of which was the construction of steel-framed classrooms to house the “baby boom” of students in the late 1940s and ’50s. Though little more than rectangles, the classrooms could be lowered onto pre-poured concrete slabs and be ready for finish work in just a couple of days.

These innovations were not lost on a young Minnesotan named Donald Wexler, who came to L.A. to work with his architectural idol, Richard Neutra. Like Neutra, Wexler was a pragmatist and eschewed prevalent modernist ideologies in favor of environment and materials. He eventually came to the desert to work with William F. Cody; there, he met and formed a partnership with Richard Harrison. In 1960, Wexler and Harrison embarked on an ambitious project sponsored by U.S. Steel to create a 40-home development in what was then the hinterlands north of Racquet Club Drive. A partnership with structural engineer Bernard Perlin of CalCor and the local Alexander Construction Company, the project kicked off in 1961 with construction of seven model homes.

The houses were composed primarily of glass, steel, and concrete — materials relatively impervious to the desert’s destructive elements. Neutra and Albert Frey were also using such materials locally, but what set the Wexler houses apart was a pre-fab central core containing bathrooms, kitchen, laundry room, mechanical room, and hallway. This innovation opened up the structure so the other living areas didn’t feel cramped — despite the fact that the houses averaged 1,400 square feet. Depending on amenities and lot, they sold for $14,000 to $17,000. The interiors were designed by Arthur Elrod. 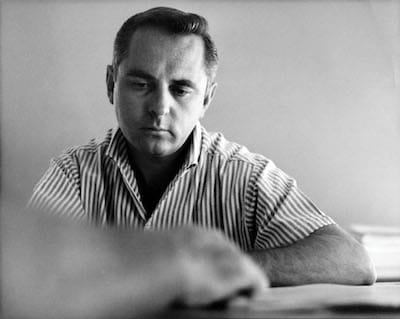 Donald Wexler at the drawing board.

Rising steel prices ultimately doomed the development, and the burgeoning community fell off the map until 1993, when a creative director from a New York–based men’s magazine bought one of the homes. It was not long before word of the “discovery” got out, and soon the Wexler steel homes were being purchased and renovated … often with the advice of Wexler himself.

Eventually, the homes were given Class 1 historic status (forever saving them from bulldozers and steel scavengers). In 2012, Steel House #2 was added to the National Register of Historic Places. It was the fitting cap to the career of Wexler, who died in 2015 and did much to shape the Palm Springs modernist landscape.