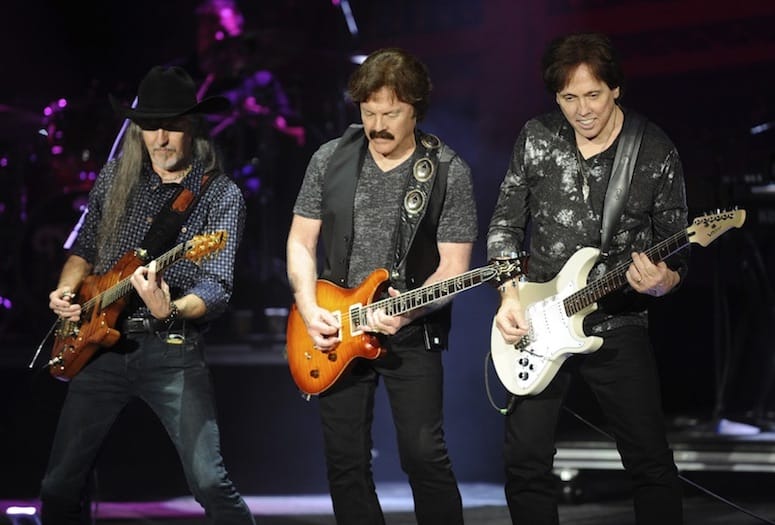 The Doobie Brothers are one of the most popular groups in the history of rock ’n’ roll, having enjoyed three distinct eras of hit-making fame and selling in excess of 40 million albums over the course of five decades. And yet, the band remains on the outside looking in when it comes to the Rock & Roll Hall of Fame, which has inexplicably inducted far less successful and arguably less influential artists in recent years.

Founded in 1970 in San Jose, California, the Doobies remain a staple of classic rock radio thanks to their unique blend of rock, folk, country, R&B, and soul. The group’s numerous hits include “Black Water,” “Listen To The Music,” “Jesus Is Just All Right,” “Rockin’ Down The Highway,” “Long Train Runnin’,” “China Grove,” and “The Doctor.” In all, the band has racked up five top-10 singles, and seven platinum albums along the way. Their 1976 compilation, Best Of The Doobies, has been certified diamond having sold more than 12 million copies.

• Bryan Adams Talks about His Sept, 13 show at  Fantasy Springs

Led by co-founders Tom Johnston (vocals, guitar) and Patrick Simmons (guitar, vocals), along with longtime multi-instrumentalist John McFee, the Doobies return to Fantasy Springs Resort Casino’s Special Events Center on Sept. 14. In a recent interview, McFee discussed his pre-Doobies band Clover, how it feels to get on a rocket ship, and the groundswell to get the Brothers inducted into the Rock and Roll Hall of Fame.

Prior to the Doobies, you were in a band called Clover, which was a precursor to Huey Lewis & The News. What was that experience like and how did the group come to back Elvis Costello on his debut album?

Clover was really like a family to me, and I really believed in the band and the guys in it. When Huey & The News hit it big, it felt very gratifying to me personally, like Clover finally made the big time. We worked really hard for years as a band, and all those years were part of the “overnight success” of Huey Lewis & The News. I was lucky enough to play on several of their albums as well, including the mega-hit album Sports, and still stay in touch with those guys — and in fact played a little on their latest as yet unreleased project. The Elvis Costello thing was an amazing bit of serendipity, as Clover had moved from the Bay Area to England, and were working on our own album when our managers approached us about backing up a new artist they had just signed for their new record label, Stiff Records. We asked to hear the material and were astounded at the incredible songwriting, and the singing was quite good, too. It was a young lad named Declan MacManus, and we liked his music so much that we said, “Sure, we’re in.” It turned out that Declan wanted to work with us because he was a fan of the music we had recorded for Fantasy Records, so it was a good fit. He came down to the place we were living in south of London in Hampshire — a huge country estate called Headley Grange, and in fact it’s pretty famous as the place where Led Zeppelin recorded most of their albums, and we rehearsed the material there. We would go up to a little 8-track studio in London to record the day after each rehearsal, and did three half-day sessions to make the My Aim Is True album.

In 1979 you replaced Jeff “Skunk” Baxter in the Doobies. How were you recruited and what were your expectations at the time?

That all happened as Clover had moved back from England and our British record contract had expired, and our managers were going through a somewhat contentious splitting up of their management company. They were having some serious disagreements about who would continue managing which of their artists, and we were caught in a legal limbo where we couldn’t book shows and couldn’t record, or basically do anything having to do with moving forward with our career. This was also right as my son was born and I felt an increased level of responsibility in my life, so I started taking work to generate income — I did some touring with Carlene Carter, started gigging with my good friend Norton Buffalo as part of his band, and things like that. All the time I was hoping for some solution to the situation with Clover so that we could start doing things again, as I still believed in what we were trying to do and considered the band to be my family. One day my wife was speaking with [drummer] Keith Knudsen’s wife about things and Keith’s wife mentioned that the Doobies were looking for a replacement for Jeff, and that Keith had thought of asking me but that because I had turned down some other high profile gig offers because of my commitment to Clover, he hadn’t done so. My wife told her that the current circumstances were perhaps different and that maybe he should speak with me, so Keith talked to me about it and I ended up going down with him from Marin where we were living to the Doobies rehearsal house on the coast south of San Francisco to feel things out. I played a number of songs with the band and they said I was in if I wanted to be, and that was how it all started. I was totally stoked, as I had always been an admirer of the band’s music and feel truly fortunate to have found such a great musical home. My expectations had mostly to do with how cool it was to become part of a musical group that incorporated so many musical styles into its material, and where the music came first — my expectations were met and if anything, surpassed. This, my joining the group, was all happening as the band’s new album, Minute By Minute, was starting to climb up the charts and ended up being the most successful album the band has ever made — biggest sales, multiple Grammy awards, etc. So it was kind of like getting on a rocket ship…

In 2010, the Doobies released World Gone Crazy, which reunited the band with producer Ted Templeman. How satisfying was it to have it be so well received both critically and commercially?

Getting back together with Ted Templeman was pretty amazing, even just that it actually happened. One thing that isn’t at all unusual when working on a project is to have no idea what other people will make of it, and we get so inside of the process sometimes that it’s impossible to have any real objectivity about it. When World Gone Crazy was mixed and sent for the audio mastering process, we were actually shocked at the reaction from the mastering lab. They were blown away, started bringing out the vintage mastering gear that they save for “special” projects, and we were surprised at the level of the positive reaction to the music; this kind of reaction continued when others and eventually the public heard the project. People really seemed to identify it with the old magic of the combination of Ted Templeman and the Doobie Brothers, so much so that it honestly caught us off guard a bit.

In recent years the Doobies have toured/performed with Journey, Santana, Steve Miller, Steely Dan, Fleetwood Mac, Chicago, and the Eagles. Tell us about the camaraderie among those ’70s-era contemporaries.

It’s a wonderful thing to have been fortunate enough to be around long enough to have all these musical friendships going back so many years. All the groups you’ve mentioned, there is an incredible amount of interconnection with and it’s always a pleasure to work with them. One example of the interconnection for me personally is that I’ve recorded with several of these artists – Steve Miller on “Fly Like An Eagle,” Chicago on “Naked In The Garden Of Allah,” Timothy B. Schmit of the Eagles on his Leap Of Faith solo project — and there are many other connections with these acts as well. Steely Dan, for example, has even had members in common with the Doobie Brothers, Jeff Baxter, Cornelius Bumpus, Michael McDonald. We just finished doing some extensive touring with Santana, and all of our members got out to jam with Carlos in different combinations quite a bit, at Carlos’ gracious invitation.

The Rock and Roll Hall of Fame inductions are not actually decided either by musicians or the public, so that explains a lot. The Doobie Brothers are not the only ones left out in the cold, so we are proud to be there with the likes of Peter Frampton, to give just one example. We just try to stay focused on our music and let it speak for itself. It is, nonetheless, possible that we will be inducted sooner or later, but again, these things are not decided by either our fellow musicians or by the fans.

Looking for more to do in the desert? Check our Things to Do page.