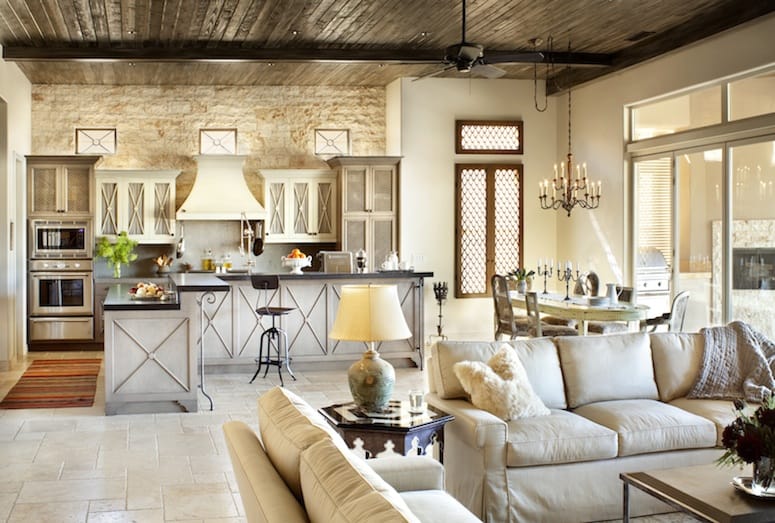 VIDEO: Watch this time-lapse video of the courtyard remodel at this La Quinta home.

Not every new home comes with built-in character, but a talented interior designer can infuse any home with character to spare. And that’s exactly what Dorothy Willetts of Willetts Design & Associates did with this plain Jane of a home in La Quinta.

Willetts is originally from the East Coast and after college was accepted at the School of the Art Institute of Chicago for Interior Architecture. While still in school, she worked for well-known designer Bruce Gregga. She moved to the desert 13 years ago and opened her firm in 2006.

“We are a boutique interior design firm that works with clients in the Coachella Valley, and have completed work in Canada, the Seattle area, and the Chicago area,” says Willetts. For this project, Willett’s biggest challenge was working with the existing architecture of the 3,800-square-foot, two bedroom, two-and-a-half bath home — including a guest house — that was built in 2005.

“I added a lot of details to give the eye something to look at — rubble stone on some interior walls, wall coverings, Venetian plasters, tongue and groove ceilings which I then had faux-painted, wood flooring, and some crown and base moldings,” she says. “The client and I both wanted to design a home loosely based on the French Moroccan style, but with a more Berber, or tribal twist to it.” LIBRARY/ BEFORE & AFTER: The library has a custom wall treatment and features a side table from Las Palmas. Willetts designed the walnut bookshelves.

“I also had to build-out one of the existing walls in the library so that the bookshelves would actually be deep enough to hold books,” she adds. “And I redesigned the layout of the kitchen along with flipping and reshaping the island to give us more space in the living area.”

In addition, she completely revamped both the backyard pool area and the front courtyard, so that the homeowner — a single man, originally from Chicago, who relocated to the desert from Northern California — had additional dining and entertaining areas with flooring to coordinate with the new stone on the interior.

MASTER BEDROOM/BEFORE & AFTER: The wallcovering in the master bedroom is a grasscloth by York. The nightstands were custom-made.

POWDER ROOM/BEFORE & AFTER: “We kept the original Kohler sink and I added an antique mirror from William Laman, which is Bruce Gregga’s shop in Montecito,” says Willetts. The wallcovering is from David Goldberg.

For the back patio, Willetts installed a crenelated retractable awing and continued the travertine flooring from inside to the edge of the pool. BAR/BEFORE & AFTER: The wallcovering is by Lori Weitzner and the countertop is 11-gauge, cold-rolled steel.