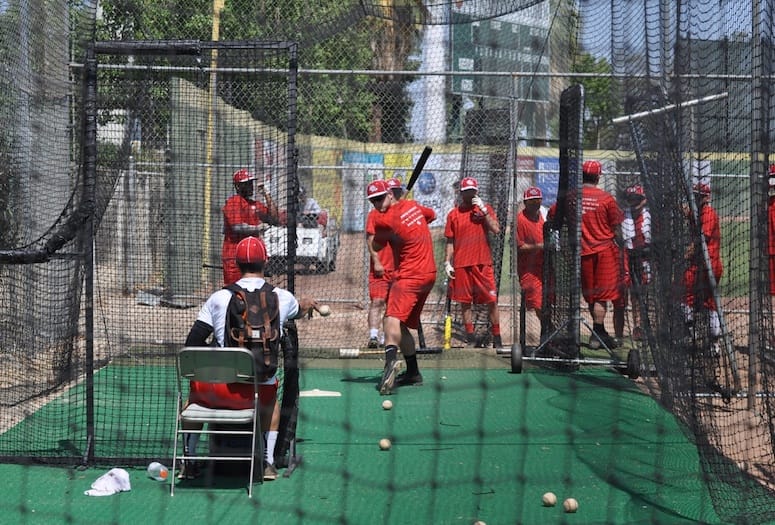 Palm Springs Power players take their turn at batting practice in anticipation of opening its season this weekend at Palm Springs Stadium.

The Palm Springs Power will begin its quest to reclaim the Southern California Collegiate Baseball League (SCCBL) title that eluded them for the first time in five years in 2016 with a season-opening series starting June 2 against the So Cal Catch at Palm Springs Stadium.

And typical to a roster that features players from all parts of the country, this season’s features a pair of Bayou boys.

Last season’s top two leading hitters for the Power, outfielders John Mauldin and Cody Ducote (last name rhymes with his first) are a pair of Louisiana natives who are both returning to Palm Springs for a second summer with the club.

Ducote, a Kenner, La., native who will play his senior season of college ball at the University of New Orleans, is swinging to repeat a team-best .373 batting average authored in 21 games last summer. As for his Bayou brother Mauldin, a native of Baton Rouge, La., the desert faithful may not enjoy his talents for long, as there’s expectation that the strapping slugger may be selected in the Major League Baseball draft beginning June 12.

VIDEO: John Mauldin explains why he is back to play for the Power.

Should Mauldin not be drafted or opt to maintain his amateur status, he will seek to mirror a stellar 2016 stat line which saw him hit .360 with a team-leading 19 doubles and 19 steals. He would then attend the University of New Orleans alongside Ducote.

Champs of the SCCBL from 2011-15, the Power welcome manager Casey Dill to the dugout. A veteran coach and scout, Dill was part of the 2016 Power staff and fills the spikes of longtime Power skipper Harry Gurley, who retired after last season.

Akin to season’s past, promotions abound across the Power schedule in 2017.

Opening night June 2 against the SoCal Catch features a post-game fireworks display which can again be enjoyed after the team’s game against the Southern Nevada Coyotes July 4.

Throughout the season, the Power will offer “Dollar Beer Night” every Tuesday and “Dollar Admission Night” on Wednesdays, along with a slew of special, nightly promotions across the summer schedule.