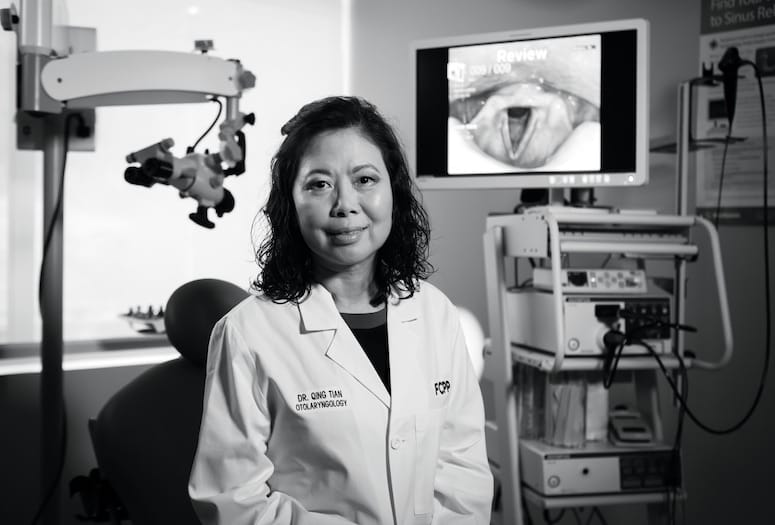 Growing up in China, Dr. Qing Tian got to know a certain ear, nose, and throat doctor rather well: her mom. “There were casual discussions on a daily basis, and I became familiar with that world,” says Tian, whose father is a thoracic surgeon. “I was just drawn to the anatomy of ENT.”

A few decades later, Tian serves as an otolaryngology head and neck surgeon at JFK Memorial Hospital and Desert Regional Medical Center. Like many local residents, she began vacationing in the area while living and working in Los Angeles, then bought a second home here and, four years later, moved in full time. “I started to really like the valley,” Tian says. “It’s beautiful.”

One thing she didn’t like? The lack of access to technology to perform the less-invasive three-dimensional-imaging-guided functional endoscopic sinus surgery (FESS) she had mastered in L.A. So, she began coordinating with JFK’s staff and CEO to procure the equipment to bring FESS to local patients, meaning less downtime, faster recovery, and better preservation of nose function.

“With old-style sinus surgery, you make a cut between the gum and upper lip and chisel the bone. In some cases, you have to make external cuts. With this surgery, you avoid all of that,” she explains. “Now JFK has the equipment that’s equivalent to the national standard.”

Chronic sinus issues and infections often stem from allergies, and Tian works to medically manage those before turning to surgery. For patients suffering from sinus-related problems that can range from poor sleep to severe headaches to breathing problems, it’s the results that matter most. “After the sinus infection is treated, the majority of the patients say those symptoms are greatly improved or cured and their quality of life is much better.”