Dream On - the Vegas-caliber cirque show in downtown Palm Springs 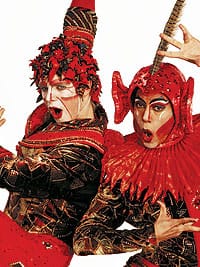 The tent is high and so is the suspense. The crowd at Palm Springs Pavilion Theatre gasps as Elise Barbeau and Veronique Rivet uncork a trapeze duet. Minutes later, holding onto oversized fabric sashes, Dreamflyers Jean Chiasson and Joanna Fassl perform an airborne ballet soaring above the front rows.

“It’s the end result of five years of experimenting,” says producer-director Neil Goldberg, the show’s creator. “It’s about creating a true spectacle. One thing we all share here is a passion to express ourselves creatively.”

The show includes a kaleidoscope of exquisitely designed costumes, lavishly detailed sets with extraordinary lighting effects, and the athletic, graceful movements of performers whose feats often seem to defy the constraints of anatomy an the laws of physics.

Goldberg created the concept for Cirque Dreams around “what you see when you have a dream,” he says. At least it’s what might slalom through his brain when his eyes are closed.

“The show begins with a blank canvas, as blank of the backs of your eyelids before you dream,” he continues. “As the show unfolds, the dreamscape develops.”

“In my heart, I want to be back on Broadway, involved with shows again,” he says. “But I’ve always been attracted to visionaries, to people like Dick [Taylor, the Palm Springs show’s promoter] who are as passionate as I am.”

Taylor — who in only five months created a 1,000-seat, climate-controlled venue and signed an agreement with Goldberg — estimates that the show must average between 600 and 700 patrons nightly to break even. “We did some research and determined that the Coachella Valley gets 3 million visitors between November and May,” he says. “I feel my odds of doing well are pretty good.

“Cirque Dreams blends all aspects of theater and design,” Taylor continues. “There’s not a bad seat in the house, and the last row is less than 80 feet from the stage.”