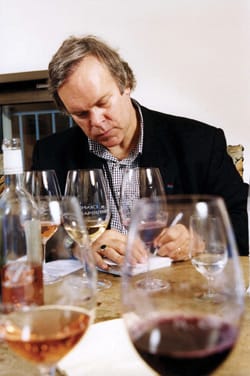 If you were a bottle of wine, you might be asking, “Who is Robert Parker, and why is he saying those terrible things about me?”

Comparatively speaking, it appears Parker wields more power than our chief of state (taking into account the fact that he doesn’t have to answer to other “branches” of his dominion). A word — or, more precisely, a number — from Parker can make or break a wine.

Cruise a wine retailer’s shelves and you’ll likely see tags touting 90+ points by Robert Parker (and occasionally an 89, though the one-point gap is more akin to crossing the Gulf of Mexico than the Rio Grande).

Parker came to power not because he grew up in the vineyards (a lifelong resident of Maryland, he was a lawyer for 10+ years), but simply because he was the first to introduce a 100-point system to rate the quality of wine and in 1978 started publishing a bi-monthly wine-buying guide called The Wine Advocate.

Of course, we (the wine-consuming public) fell for this approach hook, line, and sinker — and we still do. When we open a bottle to impress guests, we “nonchalantly” mention, “Parker gave this wine a 94.”

While wine trade competitions continue using the University of California at Davis’ 20-point scale, Wine Spectator embraced the 100-point system in 1980, followed by Wine Enthusiast Magazine and Wine & Spirits. Technically, these ratings should be called 50-point systems; every wine mentioned starts with 50 points, apparently by virtue of the fact that someone went to the trouble of turning grapes into alcohol. In fact, Wine Enthusiast and Wine & Spirits report only wines that rate at least 80. “We only have so much [editorial] room. Why waste it on telling people what we didn’t like?” says Wines & Spirits Managing Editor Tara Thomas.

It’s Parker, however, who remains the foremost authority. Some wineries — assisted by chemists and computer scientists — began creating blends specifically to suit his palate. The danger is apparent: the homogenization of an entire industry. Fortunately, the more stalwart winemakers follow their own noses and palates.

“The ones he falls most in love with are the ones doing it on their own merits anyway,” says Greg Poirier, a  sommelier certified by the Court of Master Sommeliers and a professional wine coach.

Still, you have those numbers on store tags and in advertisements — and they particularly impact the “completely ratings-driven” secondary market, says Patrick Alles, general manager of Los Angeles Wine Co. in Palm Desert. As an example, Alles says the 2000 Lafitte Rothschild that garnered a perfect score from Parker sells for $650 to $1,000, while a 2000 Chateau Mouton Rothschild that earned 97 points sells for $550 to $700. Both were released for $400.

In his wine shop, Alles uses ratings tags to help customers who may not trust his opinion make selections based on a known critic’s opinion. However, he advises wine lovers to cross-reference Parker’s ratings with others’ and learn which ones most closely match their personal tastes. Additionally, he thinks different critics have different fortes. In his view, Parker does a reliably good job with Australian wines, which tend to be fruit forward. “He doesn’t look for elegance, whereas [Wine] Spectator does,” Alles says.

But probably no one can beat the one-step-ahead Parker when it comes to marketing. In 2004, he unveiled an electronic gadget called Parker in Your Palm, allowing users to download his ratings and tasting notes into their PDAs (potentially covering more than 55,000 wines with 1,000 added every two months). He now also offers a cell-phone service to access his database.

According to Money magazine, Parker samples 10,000 wines a year, and his approval raises a wine’s price as much as 15 percent. Bordeaux producers have been known to wait for his ratings of new releases before setting their prices.

Of course, nothing substitutes for your own opinion. But — as much as you might like to — are you really going to taste 10,000 wines a year? Who has the time or money? And that’s one reason we continue to rely on Parker, who provides consumer confidence.

“It’s a rather small minority of the public, I believe, that can assess the difference between a 99 and a 95 on their own,” Poirier says. “They want the confidence to know someone else has given it his blessing.” That gives Parker a lot of power for one man.

“As much as The Robert Parker Principle can be annoying on a philosophical level, in the big picture he has contributed more than there are things to be negative about,” Poirier says. “I give a lot of credit to Robert Parker, because he woke up the wine-producing world to focus on things that are of value to the consumer, such as not to rest on their laurels, their reputation, versus the quality of their wines year in and year out.” And, he adds, Parker’s 100-point scale gave consumers a user-friendly system “that looks like our report cards.”

However, Poirier points out, it’s important for people to learn about their own wine preferences independent of Parker.

“I have never disagreed with a wine he has really liked, but I have found wines that I like that he doesn’t like as much,” Poirier says. And there’s the price factor. The Gigondas wine from the Rhone Valley is no less extraordinary than the more famous Chateauneuf du Pape, which costs up to 30 percent more for basically the same wine, Poirier says.

“The best values, dollar for dollar, are the ones that haven’t been rated by anyone — that you discover.”