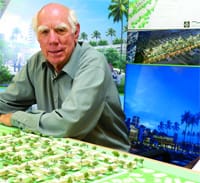 More than 150 years ago, Horace Greeley advised, “Go west, young man, go west.” In today’s Coachella Valley, the rush is east, where land is plentiful and rapidly rising in price and real estate developments are the new gold mines.

Acres and acres of farmland have fallen to developers’ bulldozers. Rows of rooftops have replaced rows of fruits and vegetables in Indio and Coachella.

The changing landscape particularly strikes people who have lived and worked in the East Valley for many years.
“Our young kids growing up today won’t see a date tree around here,” says Bruce Clark, who has owned Clark’s Travel Center in Indio for 28 years. “You have to go all the way to Thermal.”

“It’s easy to get lost down here,” says John Powell Jr., a third-generation farmer and president of Peter Rabbit Farms in Coachella. “It doesn’t look anything like it did even five years ago.”

According to the California Department of Finance, Coachella added 4,243 citizens to its rolls from May 2004 to May 2005 and Indio added 5,115 during the same period.

Rooftops are just part of the push east. All those residents need places to dine, shop, and enjoy recreation close to home. That need fit Wells Marvin’s dream of building his own downtown.

“People used to say La Quinta’s too far [to go],” says the Old Town La Quinta developer. “Now they know it’s the place to be.”

Marvin began his project with 60,000 square feet of shops and restaurants on six acres of land purchased 10 years ago. “We made a conscious decision to replicate the 1926 La Quinta Resort,” he says, describing his plan to make the new seem not so new. “Old Town is laid out as it could have been in 1926.”

Of course, in 1926, La Quinta didn’t have the population to support his project. That’s not a problem now. Phase Two — another 60,000 square feet — is slated to open this month. It includes art galleries, a hair salon, and a Peppertree Bookstore that is twice the size of its downtown Palm Springs flagship location. A wealthy populace, Marvin says, drives the demand.

Powell, on the other hand, sees basic necessity as the mother of expansion. “This is a good place for service workers to live,” he says, referring to the labor force on whose shoulders the agriculture, hospitality, and gaming industries rest. “You have great access here. … Coachella will be redefined as this expansion continues.”

Some worry about a disappearing agricultural industry, but not Powell, whose grandfather started Peter Rabbit Farms in 1950.

“There is already a lot of over-production in farming,” he says. “Most of what we produce here could move east to Imperial Valley. They have plenty of water there and plenty of land.”

Although Powell has no immediate plans to sell off the family farm, he realizes the economic advantages of doing so.

“Land used to be cheap in Indio,” Johnson continues. “Now there are $400,000 to $800,000 homes there. The traditional farm laborer idea of Indio and Coachella and Thermal is going away as housing prices go up. Farm workers are moving farther east and south.”

Indio is so busy trying to keep up with development that it has no time to develop a master plan. Instead, the city has created a “hot spot” approach targeting streets, public safety, retail, parks, and getting water to the massive housing developments north of Interstate 10.

“We have to move fast,” says hard-driving City Manager Glenn Southard. “Our population is already at 70,000. By 2010, we will have achieved our population numbers projected for 2030. There’s no time for niceties … just ‘No, we’re not doing that.’ People … want the best value they can get. They’re beginning to see the progress we’ve made and understand my style.”

Nearly a quarter of a billion dollars in financial commitment from the private and public sector and hands-on work by citizens and officials alike have meant progress in everything from lowering crime and collecting 40,000 tons of trash over the summer to supporting pioneering multiuse projects like the $450 million Polo Square along Highway 111.

The 1.5 million-square-feet project is the dream of architect-turned-builder Bill Swank of La Quinta, a 17-year veteran of world-class hotel construction in Asia and the Middle East who built the World Mark Resort. “This will be a delightful place to live, work, and play,” Swank claims.

Polo Square plans include two hotels (one luxury and one long-stay), loft apartments, single-family homes, high-end retail, two decks of underground parking, and 10-story condos. The model shows airy structures, full of glass to catch the view. Nothing like this exists in the valley.

“It’s what’s being built everywhere else in the world,” Swank says. But desert dwellers resist tall buildings. “We’ve tried to be respectful of the neighborhood,” Swank says. “We’ve put our low-rise structures next to existing single-family homes. You won’t have that long expanse of solid wall you have with shopping centers.”

“Three years down the road, you’re going to see traffic and congestion in the East Valley,” Johnson predicts.

“And that’s why you need to go vertical. … There’s actually less congestion [because people will be able to park and walk to multiple locations]. Indio is leading the way in this kind of building, and others will follow.”

Today, La Quinta’s primary image as a secluded desert haven is receding as the city undergoes a metamorphosis of major proportions — driven primarily by its attractively priced housing and the explosive growth in the eastern end of the Coachella Valley.

Mayor Don Adolph attributes the population boom to the lifestyle the city affords. “La Quinta’s unique features create an ambiance second to none,” he says. “We offer an abundance of parks, a state-of-the-art library, an active senior center, award-winning schools, quality housing, the best in public safety, fine shopping and dining, a variety of community events, and incredible golfing and recreational opportunities.”

La Quinta has long been recognized as a prime golf destination. Robb Report recently named the city “the best place to live for golfing.” Part of that status derives from La Quinta Resort & Club and upscale country club communities such as PGA West, The Tradition, The Hideaway, and Trilogy at La Quinta, which will host next month’s PGA Skins Game.

Adding to the city’s resort appeal is the 525-acre, public access SilverRock Resort, which features an 18-hole tournament course designed by golf legend Arnold Palmer. After addressing drainage problems revealed by an unusually wet winter in 2005, the city is planning SilverRock’s second phase, which includes a permanent clubhouse and second golf course. City officials anticipate a development agreement to be completed by yearend for a luxury boutique hotel, a resort hotel, and a retail village.

Meanwhile, Casitas Las Rosas, 144 vacation villas at Santa Rosa Plaza, will be joined by Embassy Suites before the end of the year. The 14.5-acre resort will offer 146 hotel suites and a 5,000-square-foot spa. And Homewood Suites by Hilton is scheduled to open this winter at Washington Street and Miles Avenue.

Construction also is underway at upscale residential developments. They include Andalusia at Coral Mountain, The Tradition, The Quarry/Quarry Ranch, The Hideaway/Madison Club, Mountain View, and Griffin Ranch. The city is focused on affordable communities, such as Watercolors, a moderate-income senior residential complex. The Center Point, which will offer 40 moderate-income homes, is in design phase. Other planned affordable-housing ventures include Vista Dunes Courtyard Homes and Coachella Valley Housing Coalition’s 218-unit rental project. More housing projects are under review.

La Quinta’s phenomenal growth has been a boon to the retail sector. As residents and visitors flock to Old Town
La Quinta for dining, boutique shopping, art exhibitions, and special events, the Spanish-style village prepares for its Phase Two launch, which includes Peppertree Bookstore; Embellish, an upscale salon and clothing boutique; and two art galleries.

Commercial and retail development are flourishing as well. A 136,000-square-foot Sam’s Club joins a Wal-Mart Supercenter along the Highway 111 corridor. A Henry’s Market and Bed, Bath & Beyond joined Best Buy in The Pavilion, and a 150,000-square-foot Costco will attract crowds on the south side of Highway 111, west of Jefferson Street.

La Quinta also champions a thriving cultural and educational environment. Entering its second season, La Quinta Playhouse, which set up a tent at Old Town La Quinta for its first season, secured a new location on a vacant parcel on Calle Estados, as well as a city grant of $50,000. Opened in the summer of 2005, La Quinta’s 20,000-square foot library at the city’s Civic Center offers children’s activities, reading programs, book clubs, and special events.

With no end to the upswing in sight, city officials are actively responding to the demands of growth. “We have significantly improved our public safety program by adding a fire station in the northern section of the city, a paramedic squad that responds quickly to medical emergencies, and a Citizens on Patrol volunteer program,” says City Manager Thomas Genovese.

“Our challenge,” Adolph says, “is to ensure that residents and visitors continue to enjoy cultural, recreational, and educational benefits as we continue to provide for a diverse, unique, and growing community.”
— Jan Silver Maguire