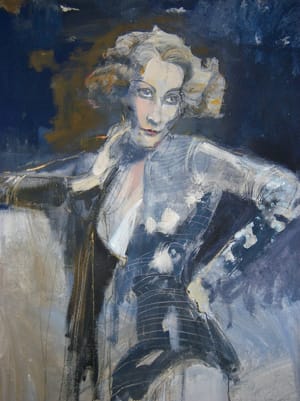 An improbable romanticism permeates Eberhard Hueckstaedt’s figurative paintings, both on paper and canvas. The 70-year-old German artist survived World War II bombings of his hometown, Potsdam, and neighboring Berlin and grew up defiantly happy at his grandparents’ home in the grim postwar Mecklenburg in the former East Germany. After apprenticing there and establishing a foundation of art skills, he studied mural and panel painting in Dresden and opened his own studio, albeit under the watchful eye of the Communist government, which suspected he was a dissident and confiscated much of his work.

The artist moved his family to Hanover and began exhibiting his deft mixed-media works throughout Europe. The Hart Gallery in Palm Desert has twice dedicated its entire space to Hueckstaedt, who spoke to Palm Springs Life through an interpreter.

Palm Springs Life: Do your childhood experiences enter your paintings?

Eberhard Hueckstaedt: I lived through the end of World War II as a 9-year-old and was quite aware of what was going on around me, like the occupation by the Red Army. I grew up a stone’s throw from the Caecilienhof Castle, where the Potsdam Accord was signed. I remember the nights in the bomb shelters. I remember women being chased and raped by Russian soldiers. My own mother was raped. Some of my works directly reference some of these events. An example would be a sort of picture book I made for my youngest son, Malte, who is also studying art. Other than that, these experiences have an indirect influence on my work in general.

PSL: Your initial success with the figure while enrolled in a technical school for the arts led you to the tradition-rich Academy of Fine Arts in Dresden, which emphasized the figure, but in realist execution. Did you feel restricted by traditionalism?

EH: When I came to the Dresden Academy in 1958, I was 23 years old and not at all conscious of the fact that I was enjoying the privilege of studying at one of the most beautiful art academies in Germany, maybe even in all of Europe. I’m referring to the architecture and the extraordinarily spacious layout. I never felt constricted, but I had no basis of comparison. There were always important artists teaching at the academy — artists we revered and held in high esteem. Once upon a time, Oskar Kokoschka and Otto Dix taught there. Dix still came every year to print his lithographs at this outstanding workshop.

Our education was extremely thorough. We were almost drilled. At the time, we students kind of resented this dogmatic approach. Only much later did I appreciate this training. Today, I value it even more, especially since I gained insight into the paltry training at our current art academies.

PSL: You attended “evening nude” sessions with other artists in Dresden. What were these sessions, and did any of the artists influence your work?

EH: We attended willingly and joyfully. Imagine an auditorium with tiered seating where seasoned professional artists work alongside students. One would look over the shoulders of the elders, in a sense, “stealing” with one’s eyes. I can’t name any names. The more prominent artists had their own models and studios. I would like to mention Gerhard Kettner, who always reached beyond the rules of academia to encourage us students to grasp the beauty of the human body with our senses, not only our eyes, and not to overcorrect but to favor a living line over a perfectly constructed but lifeless drawing.

PSL: Was there a pivotal moment or body of work that took you to expressionism and abstraction?

EH: Yes, there was such a moment. After the first five years of study, the nude as a subject for portrayal was lost to me; it was blocked somehow. It took one and one-half decades to re-emerge. The catalyst was, of course, my love for a beautiful woman, my wife, who became my model and muse. The decomposition of the figure, the expression — those came with experience and heightened skill.

PSL: You deal with so many surface issues, working in mixed media on paper, as well as on canvas. Could you talk about the materials you use, particularly how you use them to achieve technical and aesthetic effects?

EH: When I first started working on paper, I was a purist, working with watercolor, until 1986. That is when I experienced a break from my old habits and work aesthetics. I was dissatisfied with my work and decided that the “line” must play a significant role in the creative elements of my work. And thus it happened: I drew with charcoal into the not-yet-dried watercolors. I used opaque white. Later on, I added pastel chalks, elements of collage, and more. I found all of these new elements very enriching, stimulating, and invigorating.

To answer the second part of your question is not easy. The use of material is not a decision that is made with the head, but rather with the gut, so to speak. I recently read an impressive quote from a statement made by German painter Gerhard Richter, which echoes my experience: “The painting of pictures consists of a number of ‘yes’ and ‘no’ decisions, and of one ‘yes’ decision in the end.”

I seldom start my work on a completely white canvas or white piece of paper, hence my preference toward using “old” paper. When I work on canvas, I try to bring onto the larger format as many elements that are important in my works on paper. I work with French acrylic paints that have the effect of tempera or even Leimfarbe that satisfy my idea of a matte surface that has an almost fresco effect. Added to that are the pastel chalks and areas in collage, like my works on paper. Basically, I prime every canvas with a background color, providing a transparent surface. The fact that I am painting on canvas at all is owed to the encouragement of my gallerist Eva Hart.

PSL: Please comment on the significance of the vintage, handwritten documents that appear beneath so many of these pieces.

EH: I find them in antique stores and flea markets. They are mostly legal and business forms, documents, handwritten letters, ledgers, music scores, etc. They have a great aesthetic appeal to me, especially the ones that have little or no writing on them. It is paper that provides a surface that is alive with traces from the past. Toward the edge there may be yellowing, crinkling, even tears. Sometimes I find a seal or parts of a seal. I’m inspired to draw or paint upon such a surface. In order to stabilize these old papers and render them durable and long-lasting (archival), I mount them on costly watercolor cardboard.

PSL: You are revered for painting portraits of literary and music icons such as Mozart, Bach, and Tolstoy. How do you choose the personalities you paint? What do you strive to communicate in an artistic appropriation of a particular personality?

EH: I live intensely with music, literature, and theater; and therefore it is understandable that I occupy myself with, for example, Mozart, Bach, and Handel. The portraits, if I may call them that, are an attempt to get close to these immortals, as Hermann Hesse refers to them. Each attempt is a sort of encircling: What might he have been like? What might he have looked like? So it is always my Mozart — a Hueckstaedt Mozart — my Bach, or my Pushkin.

EH: Yes. I would like to say something about the American public. I am always surprised at the ability of the American people to express themselves about my work in such a direct and deferential manner. I don’t find this with the same intensity in Germany.

Palm Springs Life thanks Christian Hohmann and Eva Hart of The Hart Gallery for translating our interview with Eberhard Hueckstaedt.

This article was originally published February, 2007 and updated for the web June, 2007.