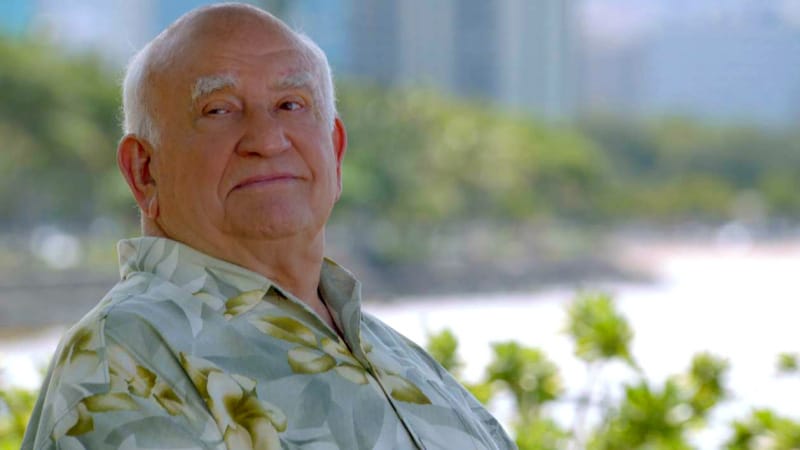 In 1961, Ed Asner and his wife Nancy hit the open road on a trip from New York to Los Angeles.

Asner was about to put his career fortunes on the line, believing the move west would open the door to greater acting opportunities and a chance at a plumb role that had eluded him.

Asner never had to regret that decision. By 1970 as Lou Grant in “The Mary Tyler Moore Show, Asner found the role that made him a household name.

The road traveled, both literally and figuratively, can hold such promise and inspirations. That's just one message from the documentary, "American Road," which premiers at 7 tonight (June 14) as part of AMFM Fest at the Mary Pickford Theater in Cathedral City. The 83-year-old Asner lent his voice to speak as Walt Whitman, and will make an appearance along with Sean Stone, son of Oscar winning director Oliver Stone, who provided the voice of the late literary giant, Jack Kerouac, in the film.

The seven-time Emmy Award winner can’t recall the last time he was in Palm Springs. But he does remember the heat.

“I was shooting a film in a motel with Meredith Baxter Birney,” Asner said earlier this week from his home outside Los Angeles. “It was hot as hell. I thought, ‘Good, I’ll be inside the room with air conditioning’. They had to get the lighting inside to equal the lighting outside. It was a very bright sunny day. So they roasted us inside without the benefit of air conditioning. It was horrible.”

His “Mary Tyler Moore” co-stars, Gavin MacLeod, who lives in Rancho Mirage, is about to release his autobiography, and Valerie Harper also recently published hers. Asner said he tried several times to put his life into words, but the process left him with a bad taste in his mouth.

“It has been disgustingly unsatisfying. So I’ve had it,” he said of any further attempts.

What stays with you from that cross-country drive in your 1961 Chevy Impala?

“When we got to Zion National Park, finally I said to my wife to take over because I was bushed. When we got down out of Zion, she kept saying, ‘Ed, it’s hard to brake’. When we got down to the bottom of the mountain, she woke me up. I took over, got behind the wheel and pumped the brakes and there weren’t any brakes. So going down all through that mountain, she was working her foot right and left just to get it to stop anywhere. We pulled into Albuquerque and got the brakes realigned.”

You appeared in the Broadway play, “Grace” with Paul Rudd, after 25 years since your previous New York stage appearance in the 1989 revival of “Born Yesterday”. Was that on your list of things to do?

“In the reviews from ‘Born Yesterday’, they sliced me up one way and down the other. I had no desire to get even because I didn’t believe them. I kind of went on Broadway to see what they were like. To see if the animal had changed. I was with three great actors and a great play. Rigorously directed. The audiences loved the show. I felt very rewarded to take my bow with the rest of the cast and see their look of pleasure at what they were applauding. We had a little bit of limited run to begin with. The reviews were mixed; they weren’t terrible. Then comes the Tony Awards and that show didn’t get one mention, and I thought they are still the same stingy sons-of-bitches. They have a Jones for anything out of the west coast. If we had come out of Chicago, it would have been different. It was worth going back to do it.”

In the roles you have taken since “Lou Grant”, including the play, “FDR” and even the animation work like “Up”, was there a conscious decision on your part to find parts so that people would not confuse those roles with Lou Grant?

“I’ve had that feeling from the beginning. When I succeeded with Lou Grant on ‘Mary Tyler Moore’, my agent and I desperately sought out freelance pieces that were opposites of Lou Grant. Sometimes we succeeded. I always look for differentiation. Most of the time people don’t want differentiation. They want what I did as Lou Grant. They want to insert it into their little show. I do it so people will know I’m not playing myself constantly and that I’m an actor. Nothing pleases me more than the fan mail that says I can do this and I can do that.”

You had a scare in March where you were taken off the stage just after starting a performance of “FDR” in Gary, Ind., and spent a few days in the hospital. Have you slowed down or changed your schedule?

“I got a couple of good doctors. I haven’t changed anything else. I need to get back to my exercising which I sorely demonstrate the need for. Otherwise, I’m taking other jobs as they come along.”

Are you at a good place in your life?

“I don’t think I’ve ever been really happy. It’s not in my nature. I’m as happy as I suppose I could be. I’m always looking for something better.”

Where can people see you on TV or on the screen next?

“I’m doing a role for a Lifetime Christmas movie where I play 'Papa Noel' in Louisiana. It’s a short piece but effective. Then I do a Disney movie in Argentina, which is conventionally straight. Not Lou Grant. Not anything else, as a grandfather. Then back to FDR for a couple of months.”