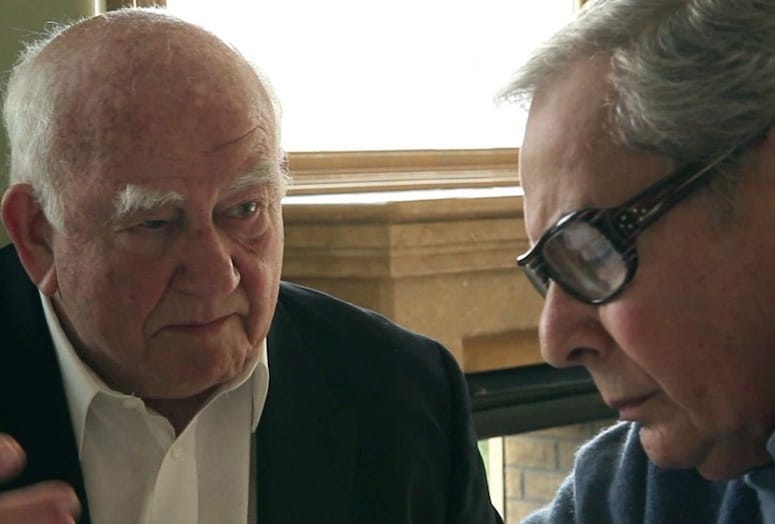 There he was riding horseback.

Only the horse had a mind of its own, leaving Ed Asner bouncing around trying to wrestle control back during a scene in the 1960s television series, The Virginian.

“They switched horses on me,” Asner recalls. “They took a plug that I was riding and put in a charger that looked just like him.”

While the cameras rolled under the directorship of Mark Rydell, Asner chased the suspect, who made a right turn. Asner’s horse followed, but went under a low-hanging branch that knocked Asner to the ground.

“I was a little cut in the face,” Asner says. “I got up, filled with embarrassment, got back on the horse, people were laughing their ass off, and Mark said, ‘That’s alright Ed. Most people wouldn’t get back up there.’ That restored my heart, and I’ll always be in his debt.”

Some 50 years later, Rydell has a slew of directing credits including an Oscar nomination for On Golden Pond, while Asner collected a record seven Emmys for The Mary Tyler Moore Show and its spinoff, Lou Grant, the miniseries Roots and the TV movie, Rich Man Poor Man.

The duo are back together as co-actors in a 12-minute movie, Good Men, and a one-act play, Oxymorons. Both actors will appear to both perform the play and answer questions about the film Nov. 13 at the Mary Pickford Theater during this weekend’s AMFM Fest in Cathedral City.

The film and play help kick-off the second annual fest, which celebrates art, film, music and other artistic expressions with panels, performances, exhibitions, and screenings. Asner was part of the last year’s inaugural event for the voiceover work he did on the documentary, American Road. Ed Asner will recreate his role of Santa Clause for an animated version of the movie "Elf" in a NBC project called "Buddy the Elf".

Did you vote today?

"I will later after I do a voiceover, an animated feature for NBC (on Dec. 16) called Elf: Buddy’s Musical Christmas.  It’s a perpetuation of Elf (the movie). Only in animation."

So you get to play Santa Claus again?

"I guess so. They are wearing me down with all the bag toting and climbing down all those chimneys. I’ve been requested to do Santa Claus quite a few times. So it’s becoming old hat, but I love the way he was written in Elf, and love to do it that way every time."

The film, Good Men, is a discussion between two elderly Jewish men on the Holocaust, conspiracy allegations and the 9/11 attacks on the World Trade Center.  Where does the chemistry between the you and Mark come from?

"I like his style. He’s confident. He’s sure of himself. He argues a position and he acts it appropriately. He’s a good buffer for me to bat against."

Can you compare it to any other chemistries with actors you’ve had before?

"Ted Knight (from The Mary Tyler Moore Show). He was a good buffer."

You’ve been very outspoken about 9/11, and the conspiracy theories of who was responsible. Did making this film create any conflict for you in terms of what the script was asking you to say and what you believe, or was there some commonality?

"It only went to a partial extent of what I was always talking about. It never became as extreme as I. I certainly approve of what it was trying to say. I don’t know how much it has influenced people. People run like chickens at the thought of challenging the government. They like to bitch about it. But saying the government lies, they could never do that."

Is that the message from the movie?

"Question authority. Challenge authority. Try to vote for somebody who is squeaky cleaner than the next guy. But I don’t think that is possible. I think they are all tainted."

Is Oxymorons cut from the same cloth as Good Men?

They plan to celebrate your 85th birthday during the Festival on Nov. 15 (1 p.m. at Mary Pickford). Do you feel as passionate about acting as you did 5 or even 10 years ago?

"I certainly feel as passionate. I get frustrated in my inability to physically pump up my chest and perform that passion. I’ve had seven hip operations. I’m ready to indict most orthopedic doctors."