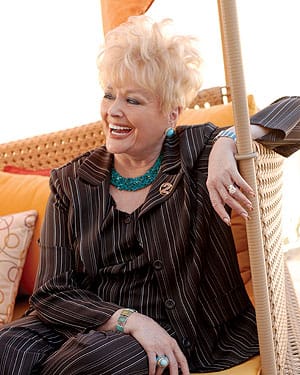 The first invitation I received after taking my place as editor-in-chief of Palm Springs Life came with a handwritten note from Jackie Lee Houston. She welcomed me to the Palm Springs community -— and to sit next to her at her table at Pets on Parade, the luncheon event benefiting the Humane Society of the Desert and Pegasus Riding Academy for the Handicapped.

It was there, at the Doral Desert Princess Resort in Cathedral City in 2002, that Jackie Lee (she insisted I call her by her first name rather than Mrs. Houston) told me not to blink, because soon she would give the Coachella Valley its own CBS affiliate on the coveted channel 2 position. Today, KPSP Local 2 is an integral part of not only the news media, but also of the community itself.

As the Palm Springs Life staff was putting this issue to bed, we learned that Jackie Lee had died. The “Guardian Angel of the Desert” — who founded, supported, led, and helped countless charities — was gone, leaving us to carry on her singular mission: to continually help improve the lives of desert residents and organizations in need.

How will we ever measure up? Jackie Lee was always raising the bar. She made giving cool. To be friends with Jackie Lee, you, too, needed to assert a giving spirit. That came with surprising ease, because hers was infectious.

Jackie Lee was especially kind to Angel View Crippled Children’s Foundation, helping to establish 18 residential properties, as well as Stroke Recovery Center (which has the popular Jackie Lee’s Thrift Shop), and F.I.N.D. Food Bank, a vision that took more than 20 years to realize. Today, Lisa Houston, daughter-in-law of Jackie Lee and her husband Jim, is chief executive officer of the valley’s only food bank, which serves the young and old, as well as the working poor.

While reviewing the pages of Palm Springs Life and by attending fundraising luncheons and black-tie galas, I continually marveled at Jackie Lee’s generosity with her time, money, and compassion.

Personally, I was mostly exposed to her leadership in the arts, especially her involvement with the Palm Springs International Film Festival, McCallum Theatre, and Palm Springs Art Museum, where — at the bottom of the main-entry steps — her star appears as part of the Palm Springs Walk of Stars.

Her impact on the desert’s arts and culture scene seems as immeasurable as the number of lives she affected. Even if you are familiar with Jackie Lee only by name, she surely influenced your life through her superheroic gifts. All the time and every dime she and Jim gave were solely to improve the lives of their neighbors. “Make no mistake,” KPSP Local 2 General Manager Don Perry said in the station’s on-air tribute. “Jackie Lee will be missed by everyone in this valley, because she touched everyone, whether they knew it or not.”

It’s impossible to list all of the charities, organizations, and individuals she helped and all the honors and accolades she received for her commitments.

Who will fill that void? That remains the challenge for our community.