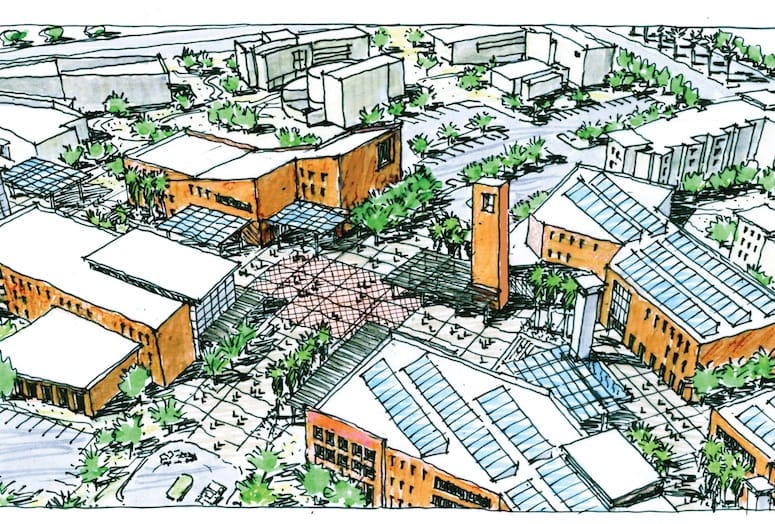 Google recently announced it is launching a certificate program to teach students the foundational skills to do in-demand jobs in as little as six months, and the model could shake up the way the education system instructs and achieves in the future.

In an interview in Inc. magazine, Kent Walker, Google’s senior vice president for global affairs, said college degrees are simply out of reach for many people, and that should not preclude them from economic security. “We need new, accessible job-training solutions — from enhanced vocational programs to online education — to help America recover and rebuild.”

Local institutions appear to be steering into this trend, as the CSU San Bernardino’s Palm Desert Campus could potentially become the online education center for the entire CSU family of campuses, “the Southern New Hampshire University of the West,” suggests CVEP’s Joe Wallace, a member of the university’s advancement board.

• READ NEXT: The Desert We Want Stories Start Here.

Wallace is bullish on higher education to raise the skill level of the local workforce, and says the Coachella Valley and surrounding areas have the critical mass to support a state university: CSU Palm Desert.

“The Coachella Valley and the commuting area in the High Desert and east to the Banning area have a population that exceeds 600,000,” he says. “Most of the land grant universities in middle America are in places like Athens, Georgia; Lexington, Kentucky; and West Lafayette, Indiana that have less than half of the population of the Coachella Valley. We can support a thriving community college called the College of the Desert if we can foster an atmosphere of continuously improving the value of human capital. It is incumbent upon the leadership of the valley to cast the ‘nothing but fun and games’ narrative aside and get on board with the continuous elevation of our people.”

Meanwhile, CSUSB’s Palm Desert Campus is rolling out new programs in hospitality management, cybersecurity, and entrepreneurship, and College of the Desert is doubling the capacity of its Indio campus (see “The Best Laid Plans,” page XX) and in the design phase for its West Valley campus in Palm Springs.

All K–12 public schools in Riverside County started the academic year with distant learning, while at press time, at least three private schools in the Coachella Valley had applied for waivers for in-school instruction.

When all schools go back to the classroom, expect them to do it slowly, grade by grade, and with a hybrid model. Under the Palm Springs Unified School District’s A–B model, says superintendent Dr. Sandra Lyon, “Fifty percent of students who opt for in-person instruction would come to school Monday and Tuesday, and the second cohort would come Thursday and Friday. We’d leave Wednesday for deep cleaning. Keeping the cohorts together helps reduce exposure and the spread and allows for better contact tracing.”

The Desert Sands and Coachella Valley districts also favor a hybrid model — even while all three districts each serve more than 1 million meals a year, as a majority of students across the valley qualify for free or reduced-price meals.

“The forced transformation to distance learning has further exposed an ongoing national crisis regarding equity and access … [and] gaps in academic achievement may widen as schools rely increasingly on distance learning.”

Students can only hope they’re on the right side of the digital divide. Although the three local districts have provisions for most students, Desert Sands superintendent Scott Bailey says, “The forced transformation to distance learning has further exposed an ongoing national crisis regarding equity and access … [and] gaps in academic achievement may widen as schools rely increasingly on distance learning.”

Before COVID-19, in a public-private partnership, DSUSD assessed broadband coverage, identified areas of inadequate coverage, and retrofitted outmoded school microwave towers with broadband transceivers. Students can check out a MiFi unit and connect to the district’s filtered Wi-Fi network. Likewise, PSUSD pays for Wi-Fi hotspots for students otherwise unable to connect at home and runs a “tech depot” for students to go with other technical problems. All three local districts issue computers to students, largely through monies made available through the California Education Technology Fund.

Alternative funding, such as grants and donations, has become vital for the districts, as parents expect more from them. “We live in a community where so many people do not have school-age children, yet so many of them support what we do by volunteering and with donations,” Lyon says, noting that the PSUSD foundation has has raised six figures to help put school supplies in homes. “They’re willing to give back. That’s very important to us.”

“This forced transformation is a learning opportunity,” Bailey says. “We have been doing school for decades in version 1.0. We unexpectedly had to move to version 2.0 overnight. I am hopeful we will keep what we liked about version 1.0 yet adopt many of the things that worked in version 2.0 so we land on school version 1.5.”