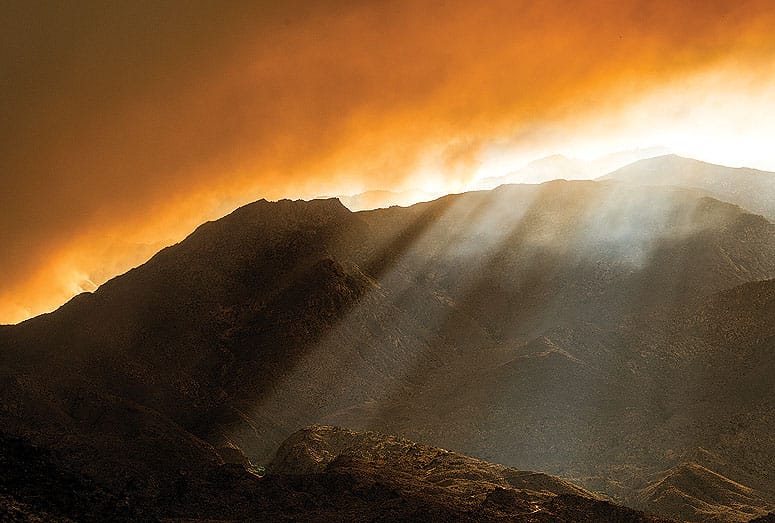 The Mountain Fire that burned almost 30,000 acres in Mountain Center near Idyllwild colored the sky above the San Jacinto Mountains, drawing the attention of onlookers in the Greater Palm Springs area.
MILLICENT HARVEY

In the late afternoon on July 16 — the second day of the Mountain Fire that started as a result of an electrical equipment failure on private property in Mountain Center and ultimately burned almost 30,000 acres — photographer Millicent Harvey posted herself at Bogert Trail, near the Indian Canyons in South Palm Springs.

In awe of the scene above the city, she watched from 4:30 p.m. until sundown.

“Toward the end of my time there, the wind shifted dramatically, and the smoke became too much to sit there any longer,” Harvey says. While there, she ran into a friend — a plein-air painter — who observed with her. They marveled at the beautiful luminance of light and color shifts created by the wind and smoke, which “were changing constantly and revealing so much detail of the vegetation deep in the mountains.

“The composition came out of these observations and from the overall undeniable power and force of Mother Nature: amazingly beautiful and ominous at the same time.”