Though cancer remains a life-threatening diagnosis since first recorded more than 5,000 years ago, Kamal Patel, M.D., shines a positive light on treatments for the disease.

“We have had significant and dramatic advances in oncology,” says the medical director of Eisenhower Bighorn Radiation Oncology Center. “The analogy I offer is how cell phones were in the ’80s and ’90s and their revolution in terms of capability and ease of use. That’s where we are at in cancer care, especially in radiation oncology. We focus on cure but are equally concerned with a patient’s quality of life. I am fortunate to be part of a multidisciplinary team of healthcare workers ensuring the best outcomes. Our radiation oncologists are part of the team, but we have administrative support, surgeons, medical oncologists, and support staff who are all key components.”

Patel identifies two goals that Eisenhower oncologists have for patients: (1) to be aggressive with the “localized core” of their cancers and (2) to maximize their long-term quality of life.

“One in eight women will be diagnosed with invasive breast cancer within their lifetime,” he notes. “The good news is that radiation-treatment time is shorter. It used to last six to seven weeks. Nowadays, many early-stage breast cancer patients, who comprise most of the cases we see, can be done in three and a half to four weeks.” 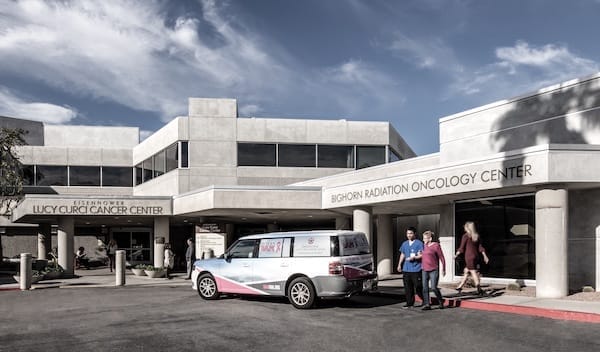 Bighorn Behind a Miracle’s BAM van.

A linear accelerator uses microwave technology to speed up electrons, thus producing high-energy X-rays. The machine then shapes the X-rays to conform to the patient’s tumor, resulting in radiation beams that are customized so that they destroy cancer cells while sparing surrounding healthy tissue. 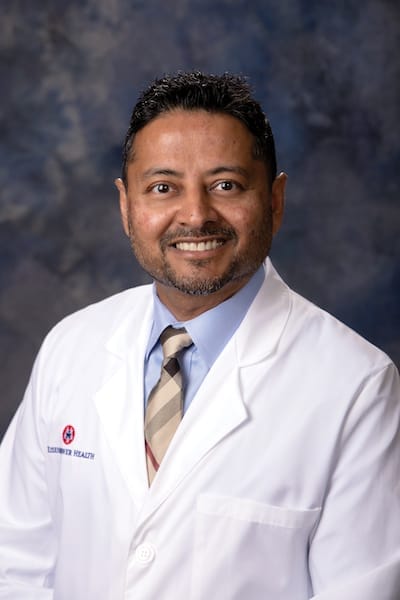 “When a person takes a deep breath, the breast moves away from the heart. When patients come for a mapping session [not requiring the standard method of tattooing], we make a mold so they’re positioned the same way for every treatment,” Patel explains. “When they come in for their treatment, we have them take a deep breath and the machine will start treatment. When they let go of the breath, the machine automatically turns off. Then they can take another deep breath and the radiation resumes. We can ensure a high level of focus in terms of maximizing the treatment and minimizing the risk of long-term heart problems. They’re on the table for about 10 minutes, but the treatment is only for a few minutes, constantly going on and off as they breathe.”

Ablation uses computed tomography, ultrasound, or magnetic resonance imaging to position a needle probe into a tumor to kill the abnormal cells by “burning” or “freezing” them. This treatment is most effective for tumors 3 centimeters or less in size and easily accessible through the skin. The most common cancers treated this way are lung, liver, and kidney.

The $4.4 million machine was funded by Alvin and Ruth Siteman; Mary Lester, in honor of her late husband, Howard Lester; and BIGHORN Behind a Miracle.

Patel further brightens the prospects for those receiving cancer diagnoses.

“There’s a very exciting development that has emerged particularly in the last three to five years,” he begins. “We used to think there were only two sets of cancer patients: those with localized tumors, thought to be curable, and metastatic, thought to be incurable. Now there’s growing information on a third group, called oligometastatic, which has a limited amount of metastatic cancer. That’s a patient population we are seeing more and more.”

A 2018 article in The Journal of Targeted Therapies in Cancer states, “Emerging data indicate that patients with metastasis to a limited number of sites may have improved outcomes with the use of locally ablative therapy. … It becomes theoretically possible to treat all detectable tumors with curative intent.”

Additionally, Patel notes, “With advancements in imaging, we are able to detect cancer at a much earlier state, so it is more likely to be cured.”

“The imaging capability we have today allows us to be more accurate and precise — to target cancer and minimize radiation to normal surrounding tissue,” adds Monica Khanna, M.D., an Eisenhower Bighorn Radiation Oncology Center radiation oncologist. “I have been with Eisenhower for 27 years and seen how philanthropy has allowed us to purchase state-of-the-art equipment so we can provide high-quality care to our community. It has been a privilege to practice in this community. It’s not uncommon for me to run into former patients. I ran into a woman recently who said, ‘You treated me 20 years ago.’ It’s wonderful to be able to provide a range of services so people don’t have to leave the area for their healthcare.”

• READ NEXT: Eisenhower Patients Can Tap Into Subscription-Based Options.