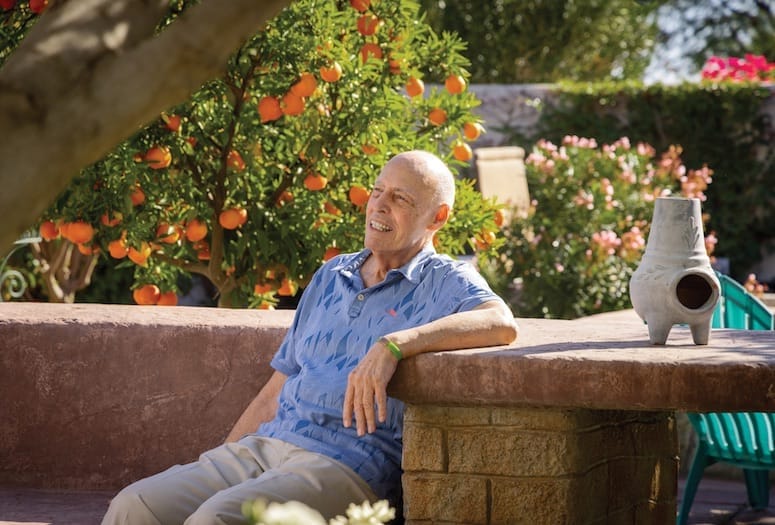 Thomas Hanes has been living with a heart condition for 40 years and sees progress in care options.
PHOTOGRAPH COURTESY EISENHOWER HEALTH

When Thomas Hanes met Andrew Frutkin, M.D., he told the Eisenhower Desert Cardiology Center interventional cardiologist, “You will find that I am a challenge and will be very interesting.”

Hanes might have sounded bold in making such a claim to a Stanford School of Medicine grad working at a highly awarded medical institution, but he was justified. He was an avid bicyclist who had lived through four open-heart surgeries, including one complicated by kidney failure that required hemodialysis; aorto-bifemoral bypass surgery; a coronary stent-implant procedure; and two cases of pneumonia. Since meeting Frutkin in 2016, he has undergone two minimally invasive procedures for heart conditions.

“My maternal grandfather passed at about age 50 from a heart attack. My mother had a heart condition and died of a heart attack when she was 80,” the Indio resident says in attributing his own weak heart to heredity.

His first three cardiac operations took place in San Jose. After moving to the desert and seeking treatment for continued malfunctioning of his heart, he was referred to a cardiac group in Los Angeles that, he says, specialized in complex cases such as his. “Each surgery was more difficult as far as recovery is concerned,” he says. “On the third one, my kidneys stopped working, so I was on dialysis for 10 days.”

On the fourth occasion, doctors performed a “beating-heart” surgery instead of putting him on a heart-lung machine.

“The recovery time was astronomically different,” Hanes recalls. “I had surgery on Wednesday and came home on Sunday.”

In 2015, Hanes received a coronary stent implant to treat angina. Within two years, he developed a severe restriction of blood flow out of his heart. Given his surgical history, he was a candidate for transcatheter aortic valve replacement. In 2017, he was the 82nd Eisenhower Health patient to undergo the TAVR procedure. However, the complexity of his vascular disease and prior aorto-bifemoral bypass surgery required vascular access through his bypass graft.

“It was done on a Wednesday and I came home on Friday and felt fine,” Hanes reports. He returned to an active schedule, riding his Tour de France-style bicycle 10 miles two or three times a week.

Hanes earned Frutkin’s respect for his proactive approach to health, but nevertheless suffered a progression of heart-valve issues. In August 2019 and May 2020, he was hospitalized with a combination of pneumonia and heart failure. Serial echocardiograms revealed a concerning drop in his heart-pumping function due to a backflow of blood from his heart toward his lungs.

“Again, his previous heart surgeries and recent heart failure made him a poor candidate for any surgical treatment. Instead, we did a minimally invasive mitral valve repair with MitraClip,” Frutkin says of the procedure he performed on Hanes in November — in Eisenhower Health’s new hybrid suite.

“Being that I have had a heart condition for 40 years, I have seen major improvements in what they can do cardiac-wise, from open-heart surgery to beating-heart surgery to ‘the hell with surgery, let’s go in intravenously and put in a stent or do whatever,’” Hanes says. “The advances in cardiac treatment are absolutely phenomenal. And to have a local group like Eisenhower Desert Cardiology Center is one of the reasons I stay here. They’re on the forefront of cardiac treatment.”

After a quick recovery from his MitraClip procedure, Hanes took to riding a stationary bike, racking up 400 miles from June through December with a regimen of riding 40 to 60 minutes a couple of times a week. He credits his resilience in part to maintaining a positive attitude, but also acknowledges the role cardiologists like Frutkin have played in extending his life.

“I am still going,” he simply states.