Two decades deep into his career as a practicing gynecologic oncologist and faculty member at University of California, San Diego, Steven Plaxe, M.D., “had the bright idea to get an MBA and learn about management,” he says. That strategy afforded him a different insight into healthcare.

“I became increasingly aware of the need to bring university-level care and clinical trials within the reach of more patients,” says Plaxe, who now serves as director of Eisenhower Lucy Curci Cancer Center.

An affiliation between Eisenhower Health and UC San Diego Health Cancer Network, established in January of 2018, represents what he considers “an opportunity to apply the lessons I learned in business school to help offer more services to patients — to help them get access to super subspecialties they might not have locally.” UCSD’s Moores Comprehensive Cancer Center is a National Cancer Institute Designated Cancer Center.

“We have a great quality of medicine here, but not an abundance of academics, which is required to develop some high-quality programs,” he says. “My role is working with both institutions to figure out areas of shared need and interest. We have had resident doctors go to UCSD on rotations and residents from UCSD come here for rotations. We hold multidisciplinary conferences and discuss challenging Eisenhower patient cases in shared tumor boards.

“The molecular tumor board, for example, is really an extension of the personalized-medicine approach, with a genetic analysis of each individual’s tumor,” Plaxe explains. “The concept is that you can achieve better outcomes if you match drugs to the particular mutation and determine the best combination and dose. It’s really a new way to approach cancer care. The multidiscipline discussion helps patients a lot, because you get broad input from a variety of doctors. Eisenhower doctors have the opportunity to Zoom link in with UCSD and present cases.”

While Eisenhower’s cancer center conducts six to 10 tumor boards a month internally, the UCSD affiliation offers access to a wider spectrum of expertise with a university holding dozens of tumor boards a month. The alliance further affords Coachella Valley residents access to local treatment for bone marrow transplants. “Transplants in general are complex, with lots of potential complications, and demand highly specialized care,” Plaxe says. “It is important to do a significant volume of transplants to offer high-quality care. Most community hospitals, even good ones and big ones, don’t have that volume. It’s a great example of an opportunity for partnership. If Eisenhower doctors have patients who might be transplant candidates, they can consult with UCSD’s Dr. Ayad Hamdan. He comes once a month to the Lucy Curci Cancer Center. The patient gets tests here, goes to San Diego for the surgery, and then gets follow-up care here. We have done seven such bone marrow transplants over the last couple of years.” 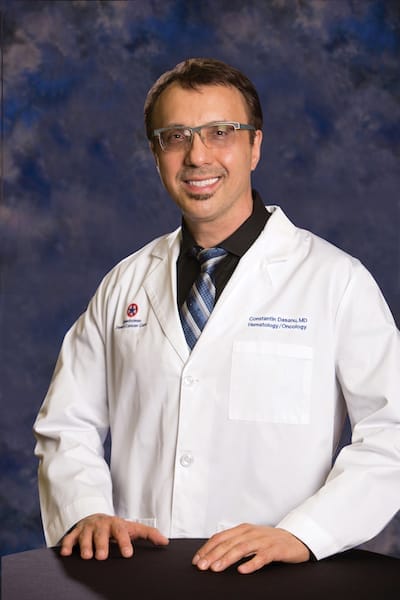 In December, Eisenhower began offering fertility preservation for patients of reproductive age undergoing radiation and chemotherapy, which can damage the uterus and ovaries; UCSD has offered oncofertility for many years. Other new services aided by the affiliation between the two institutions are care for relatively uncommon orthopedic cancer and pancreatic cancer screening clinics.

Constantin Dasanu, M.D., an oncologist and director of research at Eisenhower Lucy Curci Cancer Center, enthuses over what lies on the horizon in cancer care. “Talk about lung cancer, for instance. What used to be six months to a year [of longevity for patients] is now five, six, or more years because of advancements in things like immunotherapy. We are curing rare diseases and helping people live longer.”

Much of this progression derives from clinical trials, which Coachella Valley residents are increasingly joining through the Eisenhower-UCSD relationship. Dasanu states that when he came to the desert in 2014, Eisenhower participated in “a couple of clinical trials” run by pharmaceutical companies and, after January of 2018, “Every doctor picked up two to five studies in which they would be interested in enrolling patients.”

The array of clinical trials now available to Eisenhower patients include ones initiated by UCSD physicians, trials run by pharmaceutical companies that may only be available through the nation’s largest and most highly specialized cancer centers, and those supported/funded by the National Cancer Institute.

“UCSD has some of the best molecular biology specialists in the country,” Dasanu says. “They discuss our cases and help us improve the lives of patients and keep them alive using molecular pathways. They offer services not offered here, including CAR-T [chimeric antigen receptor T-cell] therapy, which is a new way to fight cancer by collecting a patient’s cancer cells and changing them in the lab.”

Cancer treatment, Dasanu proclaims, is advancing “not month by month or week by week, but day by day.”

The National Cancer Institute funds 71 Designated Cancer Centers in 36 states, most of those centers being tied to university medical centers. NCI states that it “supports the research infrastructure for cancer centers to advance scientific goals and foster cancer programs that draw together investigators from different disciplines. The rapid pace of discovery and the improved cancer treatments that NCI-Designated Cancer Centers have helped pioneer over the decades have increased the number of cancer survivors in the United States and improved the quality of patients’ lives immeasurably.”

• READ NEXT: How Eisenhower Schnitzer/Novack Breast Centers Are Technology Leaders.