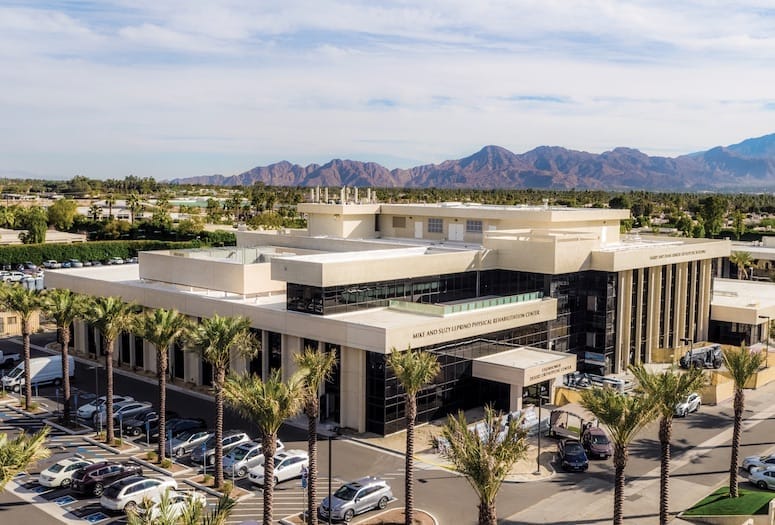 The centers at Desert Orthopedic reflect the name of donors such as the Leprinos, Renkers, and Traitels.
PHOTOGRAPH COURTESY EISENHOWER HEALTH

During Eisenhower Medical Center’s early years of mending people, a little boy in Wisconsin stayed busy taking apart objects. As he grew older, he shifted from a focus on plant biology to zoology to human biology. In retrospect, Scott Gering, M.D., sees a link between his youthful interests.

“I am essentially a human-mechanical engineer,” the surgeon says.

As vice president of surgical services, Gering oversees the functioning of operating suites — ensuring that doctors have access to rooms and equipment, developing new service lines, and recruiting surgeons to meet patient volume. Over his 20-year career in medicine, he has witnessed dramatic changes — not the least of which is how advances in technology have created a paradigm that demands rethinking physical spaces.

“The idea of how minimally invasive surgery should work has really evolved,” Gering says. “We are doing bigger cases with robotics, so we are doing more in the outpatient arena.”

That means spaces for surgical procedures, including auxiliary services and pre- and post-op areas, need to be created or reconfigured for optimal efficiency. Concurrent construction over the past year involves two distinct components with that singular goal.

Anticipated for completion by the end of March, a $70 million expansion of Eisenhower Desert Orthopedic Center adds north and south wings totaling 46,000 square feet. The orthopedic group began in the early 1980s with 4,000 square feet in the Wright Professional Building on the Eisenhower campus. After outgrowing that space, the six-doctor contingent relocated in 1992 to occupy all 55,000 square feet of the Harry and Diane Rinker Building.

“We have had two small operating rooms,” says Stephen O’Connell, M.D. “With the expansion, we will have eight. The six new ones are larger and allow for robotic equipment and big tables needed for spine cases. We will be able to accommodate many patients that otherwise would have their surgeries in the hospital. We will have the ability to have overnight stays, but the majority will go home the same day.”

O’Connell estimates that 80 percent of orthopedic surgeries can be done in the newly created spaces.

“That helps the hospital, because we use 40 percent of its operating space,” he says. “We will be able to move the majority of those procedures to the new facility, which will allow for other surgical specialties to fill the inpatient space.”

O’Connell notes that the surgery suites in the orthopedic center will be named in honor of his in-laws, Phillip and Elaine Schlosser, in recognition of their stepping forward with an initial contribution to help fund the expansion.

“Since then, other people have committed. We have very generous donors to whom we need to be very grateful,” O’Connell says. “We live in a resort community, but that doesn’t mean you shouldn’t have access to the best medical care.”

Areas of the expansion being named to recognize substantial contributions, in addition to Phillip and Elaine Schlosser Surgery Suites, are the Mike and Suzy Leprino Physical Rehabilitation Center, David and Joan Traitel Orthopedic Surgery Center, Jack and Patti Grundhofer Physical Therapy and Rehabilitation Services, and Samuel and Ann Ginn Reception.

Planned for completion by year’s end, the second surgery project involves a 10,450-square-foot renovation of the 30-year-old Dolores Hope Outpatient Care Center. While the $20 million Andrew Allen Surgical Pavilion, which opened in 2000, updated and expanded Eisenhower’s 30-year-old operating-room arena, this $20 million renovation addresses the shift to outpatient surgeries afforded by the increase in minimally invasive procedures led by robotic technology.

“They are essentially designed for robotic surgeries,” Gering says, adding that the other four operating rooms are being enlarged and modernized. The project further updates and expands pre- and post-op rooms.

The building will bear the name Dolores Hope Building/Jerry and Kathleen Grundhofer Surgery Center. Another substantial gift to the project came in honor of Bill Daniels through The Daniels Fund.