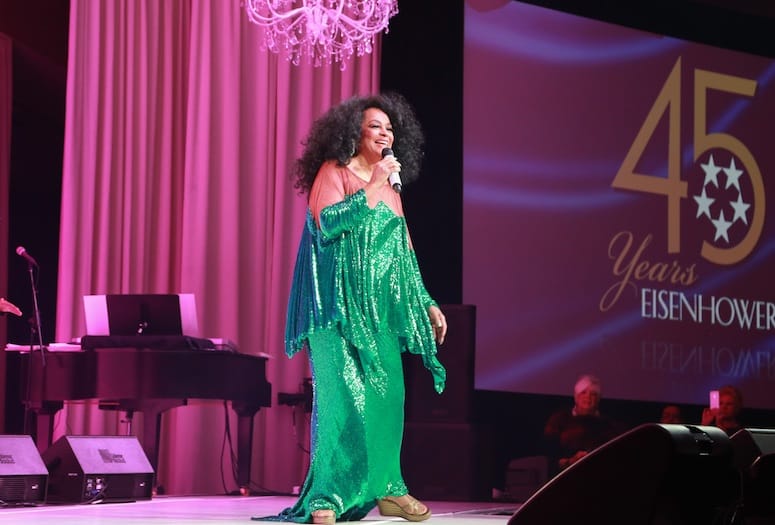 Diana Ross in shimmering emerald green thrilled 850 supporters after a sumptuous dinner at Eisenhower Medical Center’s 45th Anniversary Gala on Jan. 16. Couples raced to dance as Ross belted out hits such as I’m Coming Out, Ain’t No Mountain High Enough, and I Will Survive.

Landes gave special thanks to Nancy Harris and the Coeta and Donald Barker Foundation Board of Directors for the $150,000 gift which enabled EMC to reach their $2 million fundraising goal. Other $100,000 donors are John and Carol Curci, Janet Curci and the John Curci Family Foundation, Alan and Helen Greene, John and Anne Marion, JoAnn McGrath, Greg and Stacey Renker, Bob and Karen Rishwain, and Mike and Mary Sue Shannon.

Landes and Serfling emphasized the Legacy of Philanthropy and Leadership and the excellent patient care that helped EMC grow from a local hospital into a health system with a teaching hospital and network of clinics from Palm Springs to La Quinta. After Ross’ surprise appearance, attendees partied to the music of Impulse. Greg and Stacey Renker dance to the music of Impluse. photo by david a. lee

Diana Ross received a warm welcome from the gala audience. The crowd reacts to the sounds of Diana Ross. (From left) Jeff and Leslie Koby with Cydney and Bill Osterman.