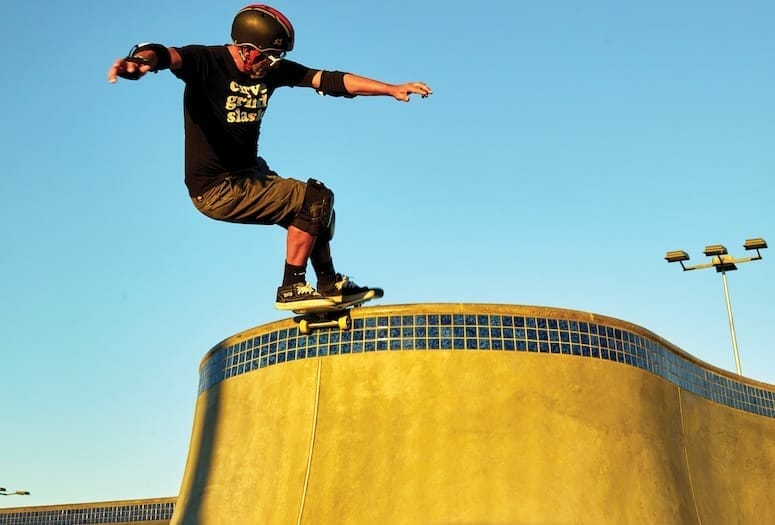 Basketball has Magic Johnson. Baseball has Jackie Robinson. Golf has Arnold Palmer. In every sport, there are pioneers and those who follow. These legends carve their names into the history books by developing new moves, obliterating existing records, and generally making unexpected choices that further the possibilities of their sports. They can emerge in any era, but there is a certain nostalgia surrounding those who came up during the so-called “early years” — in particular, in the 1970s and ’80s, decades known for daring and a sense of bygone glamour that simply can’t exist in the age of 24/7 livestreams.

“I wanted to make sure that the history of skateboarding didn’t get looked over,” says two-time world champion skateboarder Eddie “El Gato” Elguera, a Palm Desert resident and the founder of El Gato Classic. “I wanted to do something to honor the past yet champion the future. That’s kind of the tagline of the event, to bring honor to those guys, because when you’re a pioneer, you don’t get the recognition and acknowledgement [that athletes see today]. Social media wasn’t a thing back then. Somebody would invent a trick, and it would take three months before people around the world would see it in a skateboard magazine.” And that’s assuming a quick-fingered photographer was there with an arsenal of film.

El Gato Classic launched in January 2015 and was held at the Palm Springs Skate Park four times through 2018. Over the years, an impressive slate of skate icons — names like Steve Caballero, Christian Hosoi, Dave Hackett, Tony Hawk, and Scott Foss — have convened for demos, competition, and a legends talk, where they shoot the shit onstage about the good ol’ days.

After a three-year hiatus, the event returns Nov. 11–12, 2022, at the newly opened X Park in La Quinta. The change in location is significant not only because the 40,000-square-foot outdoor facility can accommodate increased attendance, and the pump track paves the way for an exciting slalom-style race pairing legends with amateurs, but because it’s a sort of unveiling for the pros. Elguera, along with fellow pioneering skateboarder Lance Mountain, helped to design the park’s Desert Combi bowl, a tamed replica of the mythical Combi pool at Pipeline Skatepark in Upland, which was torn down in 1988. Many of these legends skated there. In effect, Elguera’s involvement at X Park revived El Gato Classic and gave the former champ an excuse to once again gather the troops. “It’s like a family reunion or a high school reunion,” he says. “It brings back the nostalgia.” It also happens to be Elguera’s 60th birthday weekend. 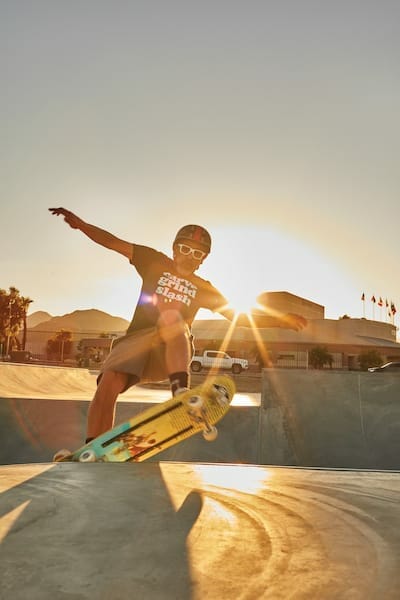 The idea for El Gato Classic surfaced around 2013.

“Skateboarding was progressing, it was growing. There were more corporate sponsors, and the X Games were big and popular,” Elguera recalls. “There’s a documentary called Dogtown and Z-Boys, about when they started skating in swimming pools [in the mid-1970s]. Then there’s a documentary called Bones Brigade that talks about Tony Hawk, Steve Caballero, Mike McGill, and those guys [in the mid-1980s]. There’s an era in between that was missed, which is really vital to where skateboarding is today, because a lot of the foundational stuff — tricks, the history — was founded in that era. A lot of the guys from the Bones Brigade, like Tony Hawk, were amateurs during that era; he learned a lot of his skateboarding skills then.”

At the cusp of the ’70s and ’80s, during that period in between those captivating skate films, El Gato rolled into the spotlight.

“He was my original skateboard hero,” Hawk said of Elguera in 2016, when the latter was inducted into the Skateboarding Hall of Fame. “He was the guy I looked up to the most because I thought he was the most innovative, the most creative, and he was doing these things at a time when skateboarding wasn’t popular. But he was breaking new ground for all of us … inspiring me as a kid, teaching me frontside rocks, teaching me that new tricks can be cool and that you can inspire people maybe that you don’t even realize.” 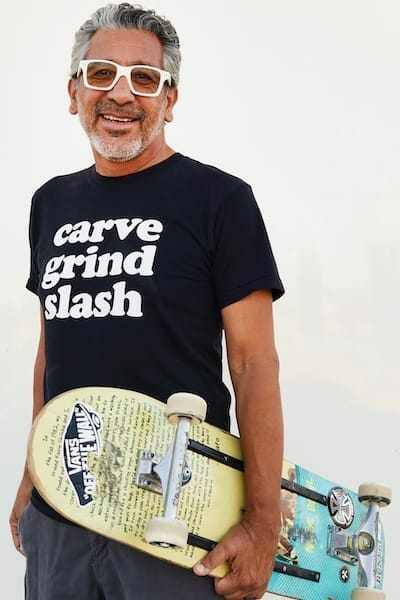 Born and raised in Lake Arrowhead, Elguera picked up his brother’s wooden Hobie board in 1970 at age 8. He remembers flipping through skateboard magazines, wanting to appear in their pages. Within a decade, Elguera had turned pro, clinched his second championship title, and was responsible for originating such tricks as the frontside rock ’n’ roll, the fakie ollie, and the Elguerial (an inverted 360-degree handplant named in his honor).

“He continues to inspire through his youth work [and] through El Gato Classic, where he honors all the legends of our sport and the new generation,” Hawk said at the induction. “And he’s still killin’ it, still skating, still ripping, and still doing frontside rocks.”

With the 2022 opening of X Park, Elguera is glad to see opportunities expand for local youth. “I’m grateful for the skate parks,” he says. “I used to drive out to Palm Springs — it’d take me 30 minutes — because that was the best skate park. There are two in Desert Hot Springs; there’s a little one up in the [La Quinta] Cove. Now, there’s this nice one in the East Valley. I think [X Park] is definitely going to help continue the growth of skateboarding in the valley.”

• READ NEXT: X Park Marks the Spot in La Quinta.