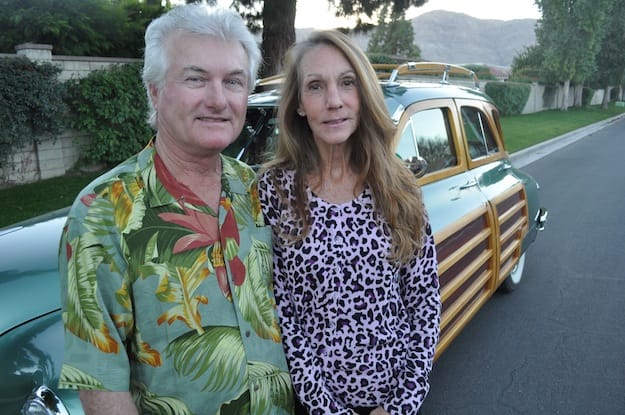 When he attended last year’s Dr. George Car Show in Indian Wells for the first time, Jerry Martin wasn’t sure what to expect.

Boy, was he floored after seeing 900 classic and vintage cars dotting an open field at the Indian Wells Tennis Garden with thousands of fans in attendance.

“I couldn’t believe it, Martin said. “That’s it. We’re gonna launch it.”

‘It’ is “El Paseo Cruise Night”, which debuts Friday evening on the street best known for its opulent shops. Martin and Lockwood are veterans of car shows, but growing up in southern California left them itching to do the best part of owning a classic car – drive it.

“El Paseo is a perfect place to have people come out and drive their cars,” Lockwood said. “People in the desert have cars. You would see them, but never together except at a car show.”

The inaugural event starts at 4 p.m. with drivers meeting at the east end of the upper deck of The Gardens on El Paseo, across from Sammy’s. CBS Local 2 weatherman Patrick Evans will oversee a short program before the car owners are ushered out to start cruising between Portola and Monterey avenues.

Martin isn’t sure how many cars will show up the first night, anywhere from 50 to possible more than 100. The level of interest has significantly increased as the word has spread. Rancho Mirage resident Sheri Kyser will be there with her 1948 Packard Sedan Woody.

“Are we going to get jackets?” Kyser asked as Martin looked appreciatively at her car.

Martin and Lockwood plan to hold the cruise events every other Friday into May, possibly later depending on the level of interest.  At this point they know they can count on the number of snowbirds who flock here with their classic cars every season.

“The whole concept was to have fun and to get car lovers to get more involved with each other,” Lockwood said. “Driving will be more fun than sitting by your car at a car show. They will meet people outside their circle.”

The couple encountered little in the way of roadblocks from the city to gain approval, discovering along the way that they were often preaching to the choir of fellow classic car owners.

Lockwood and Martin look forward to the site of the cars cruising up and down El Paseo. That’s right, the couple who organized the event won’t be driving at least the first night. Martin is in between classic cars, and they want to use the first event to gauge public interest from a spectators viewpoint.

“This is a good weekend to kick it off with the Humana (golf) Challenge in town,” Lockwood said. “I want everyone to have fun.”