Jerry Martin grew up in the San Fernando Valley and bought his first car before he even had a driver’s license. “It was a 1948 Ford Woody,” he says. “I got it for $50. It took me over a year to fix up the car, before I was able to drive it to school for the first time.”

Years later, Martin is still a station wagon man. Not too long after starting El Paseo Cruise Night in 2011, Martin found himself without a vintage car. His wife Judy found just the right one in Texas. “I flew down to Texas, took a look at the car, bought it and shipped it home,” Martin says. “It’s a 1954 Chevy Woody.”

Take a look at the El Paseo Cruise Night website, and you’ll see a drawing of the Woody with a pair of surf boards hanging out the back. “I grew up surfing up and down on the coast, all over California, Mexico, and Hawaii. I was part of the surf scene. It's never left me. That was the perfect car for me,” Martin says. 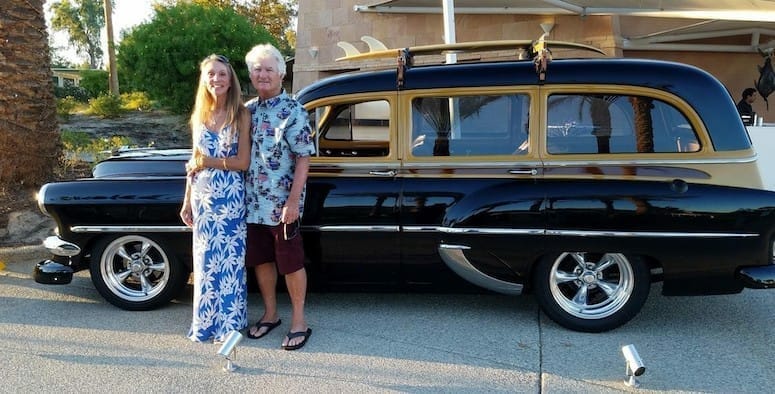 Jerry Martin and his wife Judy with the 1954 Woody Wagon.

You can see the Chevy Woody on Jan. 5 when Martin and his vintage car cronies mark the group’s 10th anniversary with a special dinner party and car show at Casuelas Café in Palm Desert. The event is open to the public and includes music from Lisa and the Broken Hallelujahs, a Mexican buffet dinner.

The 10th anniversary ride down El Paseo will happen on Jan. 7. The group meets once a month on Fridays in November and December, and increase it to twice a month from January through April. 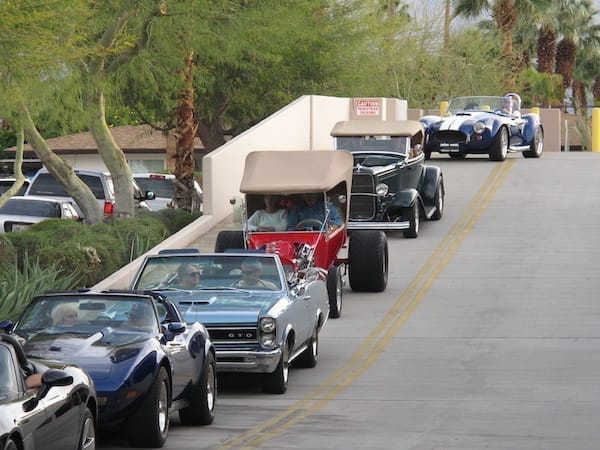 Cars exit the parking garage at The Gardens on El Paseo to begin the cruise down El Paseo.

Palm Springs Life further spoke Martin about the origins of  El Paseo Cruise Night and what has kept it it going.

What was your motivation to start El Paseo Cruise Night 10 years ago?

I went to the big car show (Dr. George Charity Car Show)  that takes place every February at the Indian Wells Tennis Garden. I have been involved with cars forever. I couldn’t believe it, there were hundreds, thousands of people. They were viewing the cars, there were probably over a thousand cars there. But this particular time, it really sat home with me. I thought wouldn’t it be cool to see the cars driving. 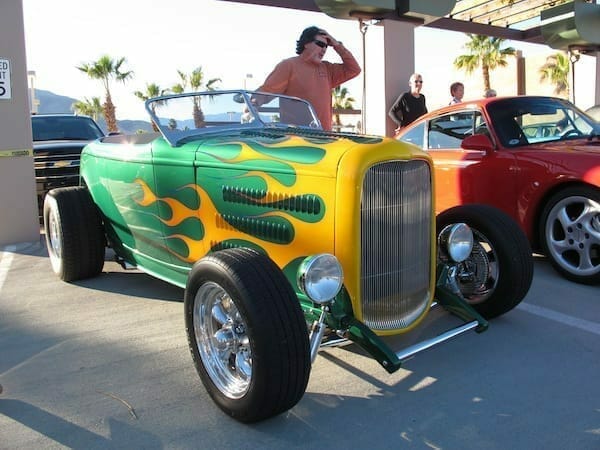 Hotrods and more are on display at the parking garage at The Gardens on El Paseo before heading out to cruise.

How long have you lived in Palm Desert? Why did you come here?

We moved to Palm Desert in 1995. We were living at the coast in La Costa, before we moved. It became so crowded over there, and we got tired of the traffic. The developers were building more and more houses, and the traffic was unbelievable

Did you had any challenges to overcome while organizing the first El Paseo Cruise Night?

I had a lot of meetings to go through. And it was just going through the process because nobody had ever done anything like this before. There was a lady at the city. Her name was Ruth Ann Moore. It took me some phone calls until I found her and was able to introduce myself and told her about my plans to bring people and vintage cars to El Paseo. She really liked the idea and suggested we should meet in person. Moore arranged a meeting with Stephanie Green, who admitted she loves cars, and said she thought it would be great for the city of Palm Desert. I had to go to the El Paseo Merchants Board, which is now called the El Paseo Parking and Business District, and make a presentation in September 2011. And they all loved the idea. The board approached us to start El Paseo Cruise Night at The Gardens on El Paseo. They gave us the upper parking lot to stage the event and start cruising from there. We've been there ever since.

What have been the keys to it lasting 10 years?

I think that car shows are great. And they're usually for a good cause, part of your entry fee goes to some kind of charity. But when you go to a car show, you pretty much park your car and you sit there. Once the trophies are handed out or the awards, then the show's over and everybody leaves and you go on your merry way. I didn't want this to happen with my event. I didn't want a car club. I didn't want it to be a car show. I wanted an event that people could come to,  without paying. I thought it would be fun if they could hang out watching all the cars. Then we would drive the cars up and down El Paseo and show off all the cars. The car owners love for people to come out and watch them cruise. It's also a major benefit for the merchants as well because we're bringing people to help a sale that probably wouldn't come.

Was there a particular event that took place when you said to yourself: "This is going to work. People will come to this."

I had no idea. I didn't know if we would get one car to show up on that first night or 10 cars. I think we must have had close to 150 to 175 cars that first night. It turned out that the flyers we handed out worked and by word of mouth the news of this new event spread throughout the valley.

When did you start partnering with restaurants and venues, like Desert Willow, on your events. Why do you think that was able to happen – what did they see in your event that made it a good match for them?

It was kind of along the same lines that we started El Paseo Cruise Night. We wanted to have an event tied in with food and ‘50s, ‘60s, and early ‘70s music. That's when we got the bright idea to partner with Las Casuelas and Desert Willow. We're going to be doing one out at Trilogy the third week of February. And it took off very successful. They pretty much sell out really quick because people like to come and show off their cars, have dinner, and listen to music.