Elaine Mathews Paints the Coachella Valley with Passion and Precision 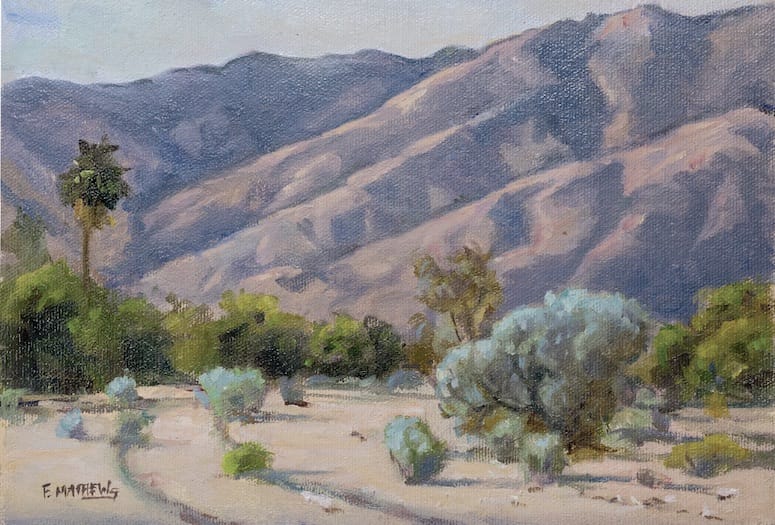 Elaine Mathews seeks out places like Araby Wash (shown) where the raw beauty of the desert looks the same as it did a century ago.
PHOTOGRAPHS BY COLBY TARSITANO

Elaine Mathews would have felt perfectly at home in early-1900s Palm Springs. Like the impressionist painters of the time, she’d take her easel into the raw desert, find a compelling vantage point, and begin composing until the sun reached a spot where it could give her scene that fleeting hallelujah moment. She would exhibit her landscape paintings at Nellie Coffman’s Desert Inn Gallery alongside others by James Swinnerton, Gordon Coutts, and Agnes Pelton. Perhaps they would discuss the distinctive ways they depict the jumping cholla, puffy smoke trees, skirted palm trees, and dramatic San Jacinto and Santa Rosa mountains. She would even teach a few painting classes.

None of this would be a stretch, because this way of life resembles Mathews’ own in the 15 years since she and her husband, Steve, moved to the desert from Buena Park, where she taught art and science at Savanna High School and belonged to the Laguna Plein Air Painters Association.

“Coming here made a tremendous impact on my output,” she says. “Look outside. We live in paradise. I had always wanted to live in a pretty place, to be able to look out and see something beautiful to paint. That’s what the early California painters did. Early morning and evening in the desert, I was inspired. You can see all the way; there’s not a house in the way. That’s why I like Araby Wash. It looks like a Sam Hyde Harris painting. It’s still the same; the canyons never change. Even the abstractionist artists are inspired by the scenes here.”

Mathews’ canvases hang on and lean against almost every wall of her Rancho Mirage house. Some even sit, drying, on the furniture: large- and small-scale works showing her reverence for not only familiar desert locations — Box Canyon, Whitewater Preserve, Joshua Tree National Park — but also her other favorite painting spots, including Big Sur and Sedona. In the living room, a painting of the Yuba River is the odd scene among others depicting the Coachella Preserve, La Quinta Cove, and Snow Creek. The river proved an exhilarating subject for Mathews. Pointing out the brushstrokes that capture the action of the water, she says, “I wanted it to look like it makes a lot of noise, because it does, that rushing sound.”

But it’s the painting on the floor in the foyer that will become familiar this month in the desert. The vertical canvas with its tall palm trees — clearly painted in the Indian Canyons — was selected as the official poster art for the 36th annual La Quinta Arts Festival (March 7–10), a juried event that for the past several years has garnered top national rankings for attendance and sales.

“It’s springtime,” she says, describing the painting. “It shows the Washingtonia filifera and the brittle brush. I painted a small one and then painted a big one from the smaller one. La Quinta Arts Foundation [producer of the festival] has an online gallery, and I posted it on there. They saw it and asked to use it as the poster for the festival this year.”

“Coming here made a tremendous impact  on my output.
We live in paradise. I had always  wanted to live in a pretty place, to be  able to look out and see something beautiful
to paint. That’s what the early California painters did.”

“Elaine is deserving of this recognition for her artistic talent alone,” she says. “We selected her first because of the outstanding quality of her painting but also for her dedication to the arts in the Coachella Valley as an instructor and mentor to many.”

Mathews, an Ohio native, has earned praise for her paintings since her parents gave her a watercolor set as a child. “I was in fifth grade when I realized that not everybody can paint like this,” she says, noting that her family moved to Southern California in 1941, shortly after she was born. “The principal at the elementary school [in Compton] put my work up in the hallway. Then I started winning awards.” 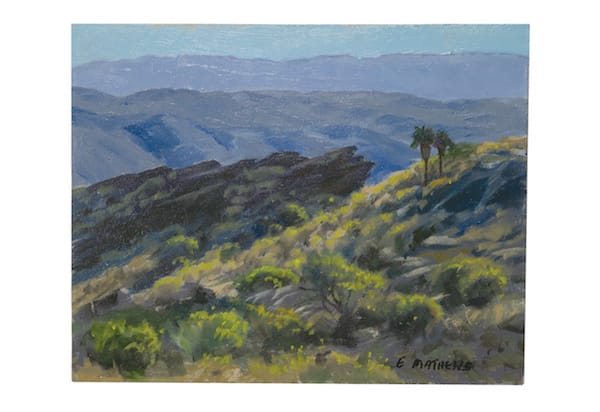 Elaine Mathews, who paints desert landscapes in the style of the early California impressionists, captured this rocky outcrop in the Indian Canyons in Palm Springs. The Rancho Mirage artist’s work appears on the poster for La Quinta Arts Festival, where she will exhibit new paintings March 7–10.

She has never stopped honing her craft. Mathews earned a bachelor’s degree in studio art at California State University, Long Beach and a master’s degree at Azuza Pacific University, and then became a fixture on the plein air scene in Orange County.

“I had a lot of art history,” says Mathews, noting that her brother-in-law was an art dealer in Laguna Beach. “I have always enjoyed the early California painters. I wanted to paint the places they painted. I love Benjamin Brown. He was a wonderful artist, a California impressionist. He used more color than others. And I like William Wendt a lot, too.”

While she has only sharpened her technique over decades of work, Mathews has had to change with the times when it comes to building an audience and selling her paintings. In addition to this month’s La Quinta Arts Festival, she sets up at the Southwest Arts Festival, Indian Wells Arts Festival, and Rancho Mirage Art Affaire. Focusing on festivals rather than art galleries has proven fruitful in recent years, not only in sales but also in creating relationships with the people who buy her work. Collectors in Mission San Juan Capistrano who purchased directly from Mathews at a festival felt like they knew her well enough to ask her to repaint a canvas they had lost when their house burned down. “I probably wouldn’t have been able to do that through a gallery,” she says, noting that she doesn’t know most of the collectors who have purchased her paintings from dealers.

In addition to painting, Mathews teaches classes at Desert Art Center in downtown Palm Springs and organizes paint-outs and other events for members of the California Art Club. Founded in 1909, the club is one of the oldest artist organizations in California and has included most of the major early California painters among its membership, including desert artists John W. Hilton and Sam Hyde Harris. It’s only fitting that Mathews co-chairs (with Andrew Gillespie) the Palm Springs Desert Chapter.