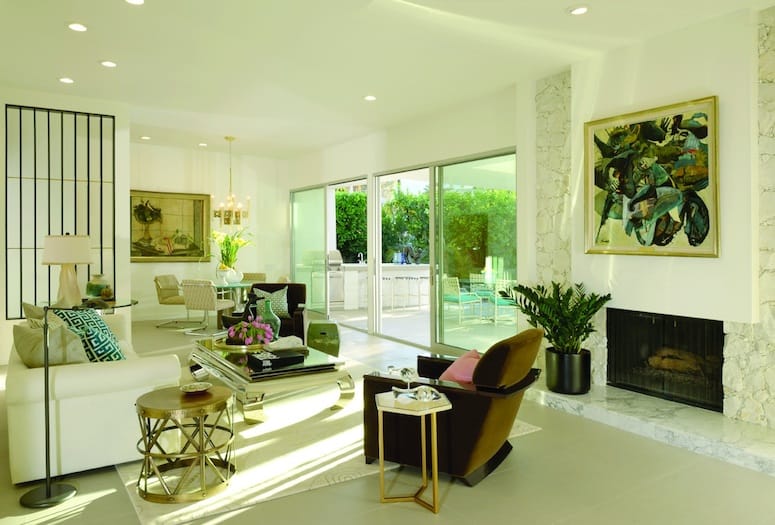 With the jingle of a set of keys, designer Sean Gaston unlocks the door to a corner lot home in the Tamarisk Country Club area of Rancho Mirage and slips inside.

After walking through a number of midcentury modern houses looking for that certain je ne sais quoi that would lend itself to going under the knife and emerging reborn, this was “the one.” He drafted the design and pulled product images while the home was in escrow, diving into the construction process as soon as it closed.

This isn’t Gaston’s own “previously grand but bland” home, however. The home and its keys belong to longtime clients Ellice Kaminsky and Paul Marin, who are nowhere to be found that day. Prior to purchasing the home, they were living in a fairly traditional 1920s Craftsman in Berkeley. Gaston was surprised and impressed when homeowner Paul Marin tracked down this Italian chandelier by Gaetano Sciolari and had it shipped from Spain. It plays well with the Andres Segovia painting, vintage 1970s table, custom “Duffy” chairs by Brueton, and olive burl wood vintage bar cabinet from Henredon’s Scene 2 series.

Gaston had already left his signature mark on that home as well as their first Coachella Valley vacation getaway in Palm Desert. When the pair decided to purchase a long-term “end game” house and relocate to Southern California as they planned for retirement, they brought Gaston along on every home tour, soaking up his professional feedback in real time.

“They didn’t want to make a move until I said it had potential,” Gaston says.

And here he found it, amid a dark environment of downtrodden carpet, heavy drapes, and overstuffed furniture. Its layout of dead ends pleaded with him to be lightened, brightened, and opened up. “It was such an oddball — we didn’t even know the architect,” Gaston says. “It lacked flow and character. But it was big with good spaces.” Its location — across from the iconic Maranz Gull Wing House and the historic Tamarisk Rancho development — sealed it.

The couple made an offer the very afternoon the trio walked through — then handed Gaston the keys. A tabletop collection — that includes a free-form brass sculptural bowl, blown-glass vase, and Chinese bronze bird sculpture — captures the homeowners’ admiration of vintage objects and Gaston’s artistic intuition for grouping them together.

Kaminsky envisioned their nicely sized 1979 house as a fresh start — happy to live in their Palm Desert condo while Gaston extensively remodeled every inch of their new home. “I wanted him to take me to a place I wouldn’t have gone on my own,” she describes. “If it was just me, I have a certain eye. It would look good. But it wouldn’t look the way he does it because of his talent and vision.” Because

Kaminsky is still working and quite busy, she considered it “a treat” to let Gaston take the reins.

“The whole point of this collaboration is the way he surprises me,” Kaminsky adds, mentioning a painting Gaston found that never would have caught her eye, let alone been considered a promising purchase. “Yet it’s a focal piece of our living and dining area,” she says. “And it’s perfect.”

She even set aside hefty reservations about a set of dining chairs that she originally felt were “too designer” and not classic enough and agreed to live with them for a while. “Sean was so excited about them, and it was his vision, so I let him do it,” she explains. “They’re fabulous. It just took us a while to get there. That’s the trust part.”

Kaminsky appreciated Gaston’s approach to a strategic composition, even when she could only see individual pieces. “I do push my clients out of their design comfort zone,” Gaston admits. “It’s fun to see them evolve.” In anticipation of their home’s major transformation, Kaminsky and Marin threw a post-closing “before party,” inviting friends and colleagues to meet the home just days prior to Gaston’s remodeling. In the living room, a Luigi Fumagalli painting draws the eye to Gaston’s custom dolomite fireplace. The carpet by Tufenkian grounds the chrome vintage cocktail table and custom mohair chair by Brueton.

Though the couple enjoys their home’s placement on the coattails of midcentury lineage, “we agreed it wouldn’t be a theme house,” Gaston says. “It had to feel timeless, with pieces from all eras.” In came an entry piece from 1800s France, topped with a very contemporary sculpture, for example.

Even facets without a history seem to have one. Mod custom screens of black lacquered wood with brass rods woven in between replace a solid wall into the dining room in what Gaston calls a “pause and reveal” — which forces the eye to stop before discovering what lies behind it.

To build a custom dolomite fireplace that would capture midcentury architecture’s best years, Gaston’s stonemason worked from a photograph of a vintage Palm Springs fireplace and replicated the pattern of the rock. It’s now the home’s subtly riveting centerpiece.

Gaston’s custom work was shaken and stirred with eclectic furniture, art, and soulful vintage lighting — including a rare chandelier sourced by Marin himself. “He saw this vintage brass fixture on my inspiration boards and admired it so much that he tracked one down on eBay,” Gaston marvels. “They wouldn’t ship it to us from Spain, so he had it shipped to his family in France, and they shipped it to us.” Now it gleams above the informal dining area, where they love to eat — formerly the site of a dated sunken bar. Gaston timed the project’s completion with his clients’ trip to France to meet their new grandbaby. They left for Europe with the house still under construction; they returned to a television-style reveal.

“When they opened the door, it was done,” down to the plants, towels, stereo system, and ingredients for their favorite cocktails, Gaston says. “To have a French guy tear up — that’s an accomplishment,” he smiles.

“It was breathtaking,” Kaminsky attests. “We went room to room saying, ‘Wow, look at that!’  It’s funny how much of a surprise it was. We knew almost every piece that would be there, but I couldn’t picture what it was going to look like until I saw it. Somehow when you put it all together, the change is huge.”

When the couple threw the “after-party,” they loved seeing their friends get as excited about the overhaul as they were. “None of us could believe it was the same house,” Kaminsky says. The outdoor living room Gaston designed has become one of the couple’s favorite places to spend time — as well as to entertain their guests, day or evening. The large vintage iron light fixture was salvaged from La Quinta Resort.

The difference is more than aesthetic, of course. Gaston and the couple have witnessed a change not only in the home itself but also in the way Kaminsky and Marin spend their time together.

“Up in the Bay Area, they had a gorgeous deck with a view of the Golden Gate, Bay Bridge, and Marin County — but they never got to use it,” Gaston recalls. Kaminsky calls it “a waste and a shame,” estimating there were three occasions a year that they weren’t fogged in, too cold, or overly exposed and baking in the sun. So much for their Berkeley retirement plan!

“Here, they wanted to live outside,” Gaston says. “So I connected the interior to the exterior spaces.” He opened the kitchen to a view of the pool and mountains, continued the flooring and colors out of doors, added furniture worthy of a living room on the covered patio, and built an outdoor kitchen — ensuring the doors across their living area easily slid.

“The outdoor space is spectacular, and it actually changes your life,” Kaminsky says. “Now we’re outside constantly. We eat our meals outside, hang out in the living room, or have a glass of wine in the evening. So many spaces are so comfortable and private that we can always be out there with our guests. It’s what we came here for.” Palm trees stretch as far as the eye can see beyond the vintage sculpture by Frederick Weinberg and vintage Tropitone Cantina patio furniture. Mountain views combine with privacy here, drawing the homeowners to live outdoors.