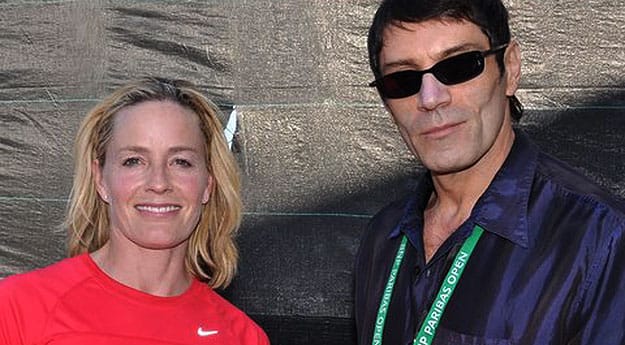 Elisabeth Shue showed up at Indian Wells Tennis Garden with a racquet in hand and ready to play. The Oscar-nominated star of "Leaving Las Vegas" (1995) hit with local kids in a USTA event held during the BNP Paribas Open. Fit at 48, Shue looked every bit the athlete in her tennis togs.

“I’ve been coming to this tournament for the last three years now,” she said in an exclusive interview for www.palmspringslife.com. “BNP Paribas Open is my favorite tournament.”

Shue comes from an athletic family and has loved tennis since she was a teen. “My earliest memory of tennis goes back to my high school days,” she said. “I went to see a Davis Cup match. I was all dressed up to look hip. I knew nothing about tennis then, but I was excited to meet John McEnroe. My whole family was into sports, mainly soccer.”

Her brother, actor Andrew Shue, played for the Los Angeles Galaxy. And the 2007 movie "Gracie," directed by Elisabeth’s husband, Davis Guggenheim, was based on the Shue family’s involvement with sports.

But a serious injury sidelined Elisabeth. “At age of 37, I ripped my achilles tendon in half, and that pretty much ended my sports career,” Shue recalled.

The mother of three recovered and has been on the court for nine years. An avid tennis player, she still finds time for her other love: acting. She joined the cast of the crime show "CSI" on CBS in February and she stars with Gerard Butler in "Of Men And Mavericks," set for an October release.