Elmer's Gives Us a Reason to Make Breakfast a Priority 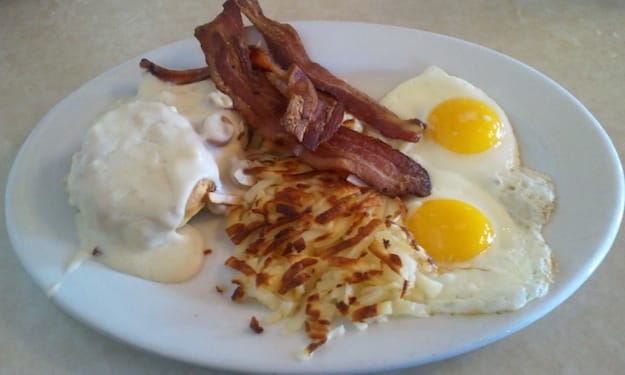 Not everyone agrees that breakfast is the most important meal of the day.

But that clearly doesn’t matter to the daily crowd of people enjoying every imaginable breakfast option at Elmer’s Restaurant in South Palm Springs. These folks are true believers — in the meal and in Elmer’s.

“I really think the word has gotten out that we serve high-quality, fresh products, have great service, and fair prices,” says Jacky Donnell, who is co-owner of the restaurant along with her husband, Fred.

“Elmer’s is a chain, but that doesn’t mean we’re not locally owned and don’t take a lot of pride in everything that we do,” adds Donnell.

On a recent morning, my dining companion was torn between the Country Biscuit Breakfast — a buttermilk biscuit topped with gravy that’s served with two eggs, hash browns and your choice of smokehouse bacon, honey-cured ham, a sausage patty, or pork or chicken-apple sausage links — and the Bacon and Tillamook Potato Cakes and Eggs.

Donnell says those potato cakes are one of Elmer’s most popular dishes.

“Our potato pancakes have a bacon, cheddar, potato mix that we use in the batter. It’s almost like a stuffed hash brown. And our bacon is the best. I always say the bacon is what happened to me.”

Although my friend opted for the biscuit breakfast, our waitress later whisked by our table on her way to deliver a plate of the potato cakes to show him what he’d missed out on — and so he could make a mental note for his next visit.

Another friend ordered the Classic German Pancake. When I asked him what he thought of it his succinct response was, “Huge and yummy.”

“Our German pancake is our No. 1 selling item,” says Donnell. “It’s very unique and you can’t really get it anywhere else. We bake it in the oven and it rises up, kind of like a Calabash bowl. It’s really light and fluffy and has butter, lemon, and powered sugar. Heaven.”

Throughout the menu you’ll see red stars, which indicate a dish is one of Elmer’s signature items. And a little blue feather icon denotes lighter fare.

If you want to try one of those lighter items, Donnell recommends the Avocado Benedict. “It’s really refreshing and is topped with our own house-made Hollandaise sauce.” Donnell says they review the menu once a year to see if there’s anything they need to change, add, or delete. “And we switch the front cover every two months to make it seasonal. Right now it features fresh peach and blueberry crepes.”

That image must have had a subliminal effect upon me because I immediately gravitated to a large stack of blueberry pancakes (pictured above).

As I savored all the juicy, fresh fruit that had been scattered throughout the buttermilk batter, I couldn’t help but be reminded of what Donnell had said about those German pancakes.