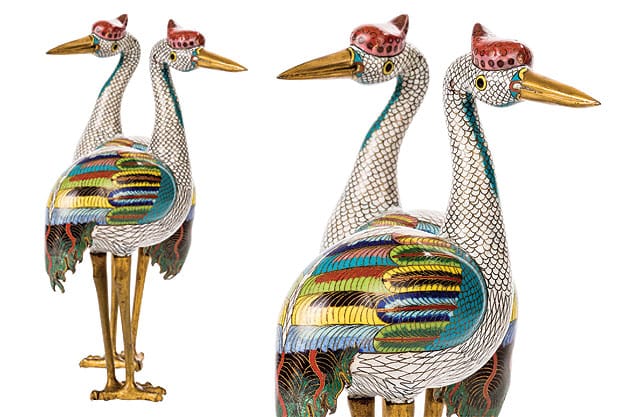 According to Anne Rowe, director of collections and exhibitions, archival correspondence reveals a collaborative relationship between the Annenbergs and designer William Haines as they decided to pursue cloisonné works from the Chinese Ming and Qing dynasties.

“In particular, the Annenbergs sought works from the Qianlong period (1736-1795) [of the Qing Dynasty],” Rowe says.

Installed primarily in the vast living room of their Sunnylands residence, the collection of more than 30 pieces includes matching tables, almost-5-feet-tall crane-form candle stands, an imperial-quality pagoda with warrior, and a meiping vase (the traditional bulbous-shouldered vase used to display a branch of plum blossoms) festooned with gilded metal swags, and a wall-hung panel depicting scholars in a rural scene.

In a 1983 Connoisseur magazine article, Walter Annenberg explained his appreciation for the latter: “… the vigorous movement of colors, the bold forms remind me so much of van Gogh.”

As Sunnylands staff contemplated which pieces to remove from the residence for display cases in the visitors center for the exhibition, they planned to replace them with other Chinese objects — such as Chinese jades and ceramics — also collected by the Annenbergs.

Cloisonné is the technique of creating designs on metal vessels with enamel surrounded by copper or bronze wire. Though cloisonné has been traced back to ancient Greece, the most highly valued pieces come from China, where it was primarily created to decorate temples and palaces.