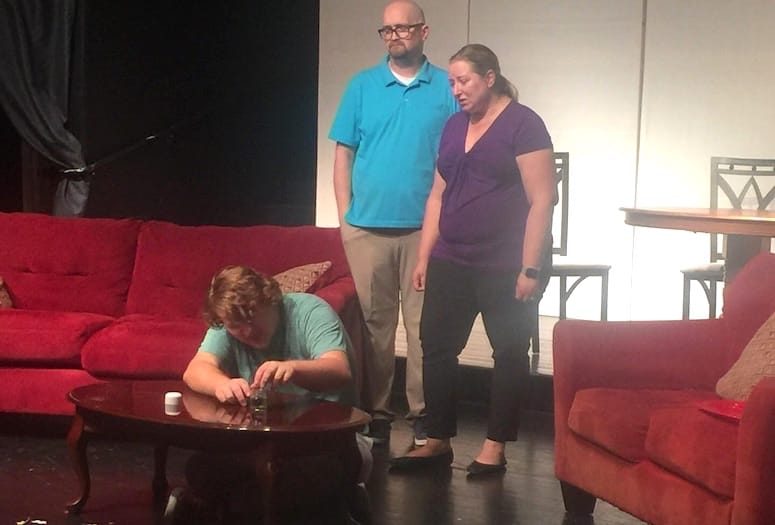 The Coachella Valley’s theater season is not over yet, folks, as evidenced by a terrific Encore Theatre District production of Deanna Jent’s powerful play, Falling, which opened Friday at the Palm Springs High School Black Box.

Josh (played by Jeremiah Rhoads) is an 18-year-old with severe autism. He likes to play with feathers and spend time on the computer. He eats alone in his room because he can’t stand the sight of others chewing. For the most part, he’s a sweet young man … except when he’s not. A broken DVD, for example, can send him into a violent rage. At one point he attacks his mother with such intensity that he literally rips the shirt off her back.

Keeping Josh happy — and quiet — is a full-time job for his parents, Tami (Ann Van Haney) and Bill (Andrew Patscheck). But rather than bemoan their situation, they simply accept it as their lot in life and just deal — much to the frustration of their teenage daughter, Lisa (Brenna Williams), who justifiably feels jilted in the attention department. Their every move and thought centers around Josh — keeping him happy, keeping him entertained. And though they are on waiting lists for homes where Josh can have round-the-clock care — if, indeed, that is the best solution — there seems to be no relief on the horizon. Bill’s well-intentioned mother, Grammy Sue (Alden West), comes to visit and suggests they turn to prayer for a solution. But as we soon discover, prayers are not always answered in the way one hopes.

At times, Falling is not an easy show to watch. It brings up a lot of difficult-to-navigate emotions: What would I do if I were in this situation? Would I be able to muster this much patience? If not, would that make me a terrible parent? And should I feel guilty for being grateful this is not my life? Produced in conjunction with the Coachella Valley Autism Society — who celebrated their 20th anniversary in 2018 — Falling is not a play about autism per se. Rather, it’s about maintaining unconditional love for someone who is difficult to love.

The cast is top notch. As Josh, Rhoads is believable and sympathetic, even when the character is acting out. It wouldn’t be difficult to overplay Josh and make him a caricature, or play him in such an excessive fashion that he becomes obnoxious, but Rhoads understands the character’s subtlety and keeps him authentic. 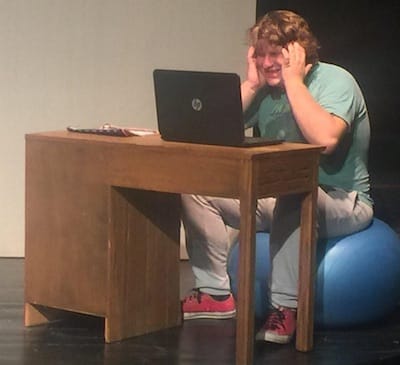 In the role of Tami, the selfless mother, Van Haney soars. Though the character chooses not to acknowledge the constant frustration and pain (both emotional and physical) that she endures, Van Haney’s characterization is so beautifully nuanced that the audience knows exactly what she’s going through. It’s an incredible performance. As her husband, Bill, Patscheck shows us an alternative approach to dealing with the situation. Though patient and caring, Bill is the family anchor, the more realistic of the two. He knows how and when to express exasperation, and Patscheck’s deft handling of the character makes their relationship real. When the two even skim the surface of conceding the toll their nonstop caregiving has had on their marriage, it’s heartbreaking to watch — a testament to the work of two solid performers.

In supporting roles, both West (as Grammy Sue) and Williams (as Lisa) are terrific. Rather than getting buried under the intense drama, they hold their own and provide some necessary relief from it.

Under the skillful direction of Tiffanie Patscheck, the action moves at a smooth pace and makes good use of the black box theater’s ample staging area. The only odd moments took place at the end of each act. Normally, a lighting or sound clue lets the audience know that the play is over or that you have 15 minutes to stretch your legs. In Friday’s performance, however, the house lights came on during what turned out to be the final scene of act one, so when the performers left the stage, the audience sat dolefully, wrapped up in the action, until a crew member came out and told us there was an intermission. A similar situation happened at the end. It wasn’t until a cast member walked downstage and began bowing that we realized the play was over and it was time to applaud. Both of these were likely the results of technical glitches; if so, hopefully they were smoothed out by the next evening’s show.

Falling runs Friday and Saturday evenings and Sunday afternoons though May 26 at the Palm Springs High School Black Box, 2248 Ramon Road, in Palm Springs. Tickets are $25 and can be purchased at the door or by calling 760-999-0052. A portion of the production’s proceeds benefit the Coachella Valley Autism Society.