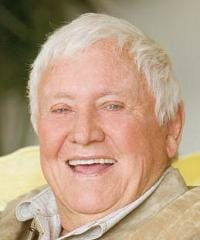 At 80, Merv Griffin still plays a role in the entertainment industry, but his first love — thoroughbred horses — inspired his new residential community in La Quinta

"How did I get to be 80?” asks the irrepressible Merv Griffin, his baby-blue eyes twinkling. “I just woke up one day and I was 80. I don’t feel any different. I still feel very creative, and I have a lot of energy.”

Talk about understatement. The popular entertainer is an entrepreneurial juggernaut, heading The Griffin Group, a multibillion-dollar empire that he founded in 1986 after selling Merv Griffin Enterprises to Columbia Pictures Entertainment — then a Coca-Cola Co. subsidiary — for $250 million. In the last 20 years, he has bought, managed, and sold 17 radio stations, six casino resorts and riverboats, and 17 hotels (including the Merv Griffin Resort & Givenchy Spa in Palm Springs, now Parker Palm Springs). Today his business interests include hotels; film and television production companies; real estate investment banking; breeding thoroughbred horses and other racing activities; and lifestyle housing, including his latest desert venture, Griffin Ranch.

Griffin first came to the desert in the 1940s with his uncle, a former U.S. Open tennis doubles champion. “I was 19,” he recalls. “We stayed at Charlie Farrell’s Racquet Club in Palm Springs with all the celebrities. Those were great days.”

Tennis brought Griffin back to the desert four decades later when he and Johnny Carson came to see Jimmy Connors play at the La Quinta Resort & Club in the tournament that evolved into today’s Pacific Life Open. “I looked around and thought this would be a great place to bring my horses,” he says. “I bought the first and only 80-acre parcel I saw. It was a disaster — nothing but sand, cactus, a little old motel, and a small lake. My son asked me, ‘What are you going to do with this?’ And I said, ‘See if I can make Kentucky out of it.’” Griffin later bought up other adjacent parcels, eventually accumulating 240 acres.

In his typical hands-on style, Griffin immersed himself in building his La Quinta home, an exotic Moroccan-style manse with interiors by famed designer Waldo Fernandez. “I worked with a deaf-mute who worked for Waldo,” he says. “We communicated by hand signals and sketches.” Griffin admits that he copied design elements of Yves St. Laurent’s residence in Marrakesh, which he saw when he and longtime lady friend Eva Gabor visited Morocco and “snuck onto the property.”

Griffin’s home was a labor of love, with materials carefully selected and imported from around the world. Then, when it was almost complete, disaster struck.

In 1987, he was in Atlantic City on business (out-trumping Donald Trump on a Resorts International deal), watching CNN in his hotel room, when a story about a fire in the Coachella Valley aired. It was Griffin’s home, and an electrical fire leveled it. “The furniture was stored in the stables,” he recalls, so at least that was salvaged. But everything else was gone. Undaunted, he started over, importing the same materials and rebuilding the entire house in 18 months. “We knew what we were doing the second time,” he says.

Gabor spent a lot of time at the ranch until her death in 1995. “She always got up early,” Griffin says. “One morning, I asked the household staff where Miss Gabor was, and they said she’d gone down to the stables. I went down there, and every horse had lipstick on its face. She had kissed all of them good morning!”

[…] This article continues in the May 2006 issue, or subscribe to avoid missing future issues!