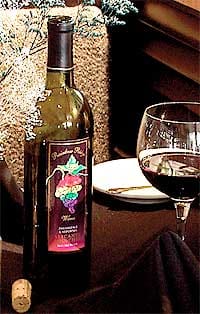 Just when you think Wine & Spirits reviewers have exhausted their vocabulary of ways to convey the essence of a vintner’s creation, they come up with this:

“Though the variety is considered rustic, this alicante transcends its simple fruit with a warmth you can feel at the back of your throat as all the flavor radiates in the finish. The fruit is grapey, beautifully presented with oak having creamed the tannins to leave that black fruit warmth.”

Such poetic language is enough to make you close your eyes and imagine the sensory experience — if not run to the store so you can pour the real thing for yourself. This description accompanied the 90 rating Wine & Spirits gave Rainbow Ridge Wines’ 2001 Alicante-Bouschet.

There’s one subtlety the expert taster missed — and it’s a “secret” revealed by Rainbow Ridge co-owner Dennis Costa. “We use three oaks: American, Hungarian, and French,” he says from the company’s Palm Springs headquarters. “I used to work for Robert Mondavi in the barrel room and bottling room, and I learned a lot in that process.”

Costa and partner Tom Beatty began their careers as winemakers with Alicante-Bouschet grapes, a highly productive but problematic fruit (because of its acidity) with a tough skin. Whereas most red-wine grapes yield a clear juice and are crushed with the skins to impart color, Alicante-Bouschet grapes yield a red juice without the skins, which results in a lower tannin level. Yet the color is so deep that it borders on purple.

Alicante-Bouschet can be traced to Louis Bouschet, who in 1824 crossed aramon grapes with an ancient red-juiced vinifera variety called Teinturier due Cher. In 1865, his son, Henri, crossed the resulting Petit-Bouschet with grenache to create Alicante-Bouschet.

Costa and Beatty took a more-traveled path in producing their first white wine. In November, they bottled a chardonnay that blends 76 percent chardonnay grapes with 14 percent chenin blanc grapes.

“It is like the alicante; it has a very full body,” Beatty says. “It’s citrusy, with a very fruit-forward bouquet, lightly oaked.” He says that the public is getting tired of intensely “oaky” chardonnays. “The chenin blanc gives it almost a tinge of sweetness in the aroma,” he adds.

Although Costa and Beatty operate their marketing and sales efforts in Palm Springs, Rainbow Ridge wines are made in Lodi, where Costa’s grandfather, Joseph da Costa Narcizo, began the family winemaking tradition after emigrating from Portugal in 1906. Costa, as he Americanized his name, and his sons began by making 25 barrels of wine during Prohibition. They cooled the bottles in the water of an irrigation ditch and hid under stacks of hay on their dairy farm.

Grandson Costa and Beatty have the 21st century advantage: high-tech cooling equipment and temperature-controlled stainless steel vats — and the last thing they want to do is hide their wine. It is on numerous restaurant wine lists in the desert, is available at Jensen’s Finest Foods, and is sold in 20 states.

This past fall, they presented their Alicante-Bouschet and samplings of their yet-to-be-released chardonnay on a Cruise West wine cruise that plied the waters of the San Francisco Bay and continued up the Napa River to visit wineries in Napa and Sonoma counties. Costa and Beatty helped narrate the motor coach portions of the trip, made presentations aboard the ship, took bottle orders, and supplied wine for the farewell dinner.

“The captain and crew loved it,” Costa says. “They said we were the best presenters they had ever had on their cruises. We had a lot of fun with it.”